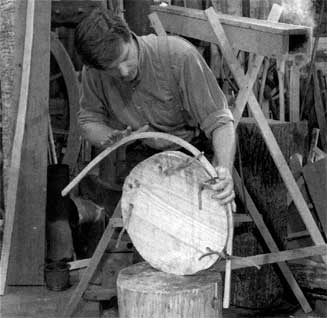 The arm rail may be steam-bent around a mold as seen here. The slot in the perimeter of the mold keeps the rectangular oak rail from floppin Much of the comfort of the Windsor chair is in the springiness of the hickory back spindles. Like the legs, the spindles must be split to shape and then shaved, or turned on the lathe, to their final shape, as you prefer. If you are making shaved spindles, you will need to make a gauge (a board with holes in it) to fit to the diameter at four critical points. These four points are: (1) the base where the spindle fits into the seat, (2) the largest diameter of the spindle, (3) the diameter at the intersection with the arm rail, and (4) the diameter of the top end that fits into the crest. Thus, make your four-holed spindle gauge using the three augers that you will use to bore the holes in the seat, the arm rail, and the crest, plus a 3A-inch auger for the largest diameter.

Rough out the spindles with a drawknife and let them dry lor a few days before you bring them down the rest of the way with a spokeshave. The final fit for the top and bottom of each spindle should be pretty snug, so just the very ends should fit in the holes in the gauge.

What really makes a Windsor a Windsor is the sculpted plank seat that takes the legs and spindles like an archery target. Because this is a revolving chair, there are two seats, each a bevel-edged disc 13A inches thick. Traditional English Windsors use a single plank of unsplittable elm for seats. I used yellow pine that I joined up with dowels and glue to the necessary width. Lay out the discs with a compass, both to their larger diameters, and then to their smaller diameters by subtracting an inch from the radius. Saw out the disc and then trim down all the way around to the smaller diameter with a hatchet, bringing it all smooth with a spokeshave. 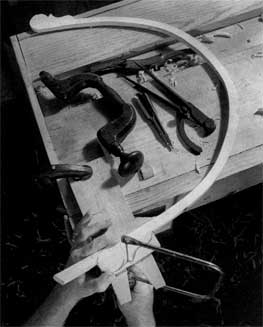 After the arm rail dries for four or five days, it will hold the bend and may be shaved to the final dimension. Framing up a chair was a separate specialty task among the English workers, and you could recognize a framer by his socketed breast bib, which acted as a pad for his brace and bit. Because boring the holes to frame up the chair could make or break the work of the previous craftsmen, the framer's bib was a respected badge of office. Again, the round seat of the swivel chair makes the task somewhat simpler, if more restricted. The outward splay of the legs, which lowers the center of gravity and resists racking, must, on this chair, be even all the way around, rather than sticking out more on the back legs, because this chair has no back legs as such. The splay for all four legs may be guided by your bevel, set to cross the square at f and 4 inches.

A Windsor gains further strength in the legs by using a tapered hole for the similarly tapered legs. Whereas a hole and shaft joint with parallelsides becomes loose if the leg shrinks, the tapered hole and matching tenon are always being forced tighter as soon as you sit down. The taper on the leg is shaped when you turn it on the lathe, but the hole must be shaped with a tapered reamer. Such reamers were commonly used to bore tapered holes in wooden casks and are generally available as antiques. You can also make a reamer of any size by turning a tapered shaft of hardwood and inserting a scraper made from a hacksaw blade radially into one side. 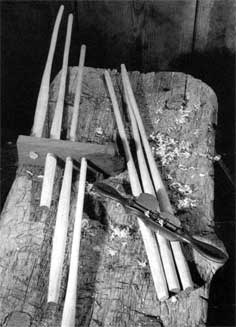 The four holes in the spindle gauge give the diameters of the base, the thickest point, & the intersections with the arm mil and the crest.

When all four legs are in place and the splay is even and sufficient all the way around, tap the legs almost all the way into place so you can bore the holes to insert the stretchers. By sighting between the two legs, you can bore the holes for the stretcher at precisely the right angle. The problem is that you need either a very short brace and bit or a very long brace and bit in order to have room to work. If you have an extension for your auger bit, you can shoot right past one leg into the other without causing so much angular deviation that the stretcher won't fit. Otherwise, pull out the opposing leg and eyeball the brace parallel to the bottom of the chair and bore away. Cut the two side stretchers to length, drive them into their holes between the legs, and then tap all four legs and the two stretchers back into the seat. Now bore holes for the middle stretcher and cut it to fit in just as you did for the side stretchers. Before you drive the legs in for the final time, saw a kerf into their top ends that runs at right angles to the grain of the seat where each leg fits. After you tap the legs fully into their holes, drive in a finely tapered wedge to lock them into place. 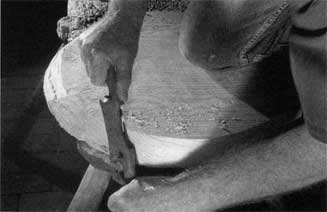 Lay out the seat planks in two concentric circles, ana chop and shave them down to create (he bevels. 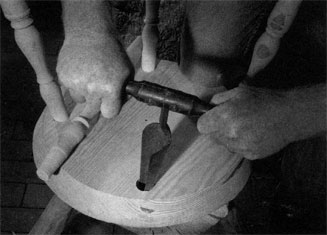 Use the bevel to guide the auger as you bore the initial inch-diameter holes for the legs.