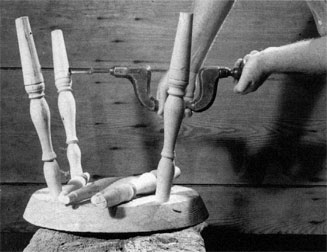 Drive the legs into place, and bore between them to make the holes to take the side stretchers. In a normal Windsor, we would have sculpted out the seat before joining the legs. Here, because the seat is in two separate pieces, we can wait until all the bottom work is done. The upper seat swivels around a central iron axle fixed to the center of its underside, while riding on six rollers inset into the top of the lower seat. A circular tin wear plate keeps the rollersfrom eating into the upper seat. I made the rollers from boxwood and set them on axles cut from nails, chiseling a pocket for each axle on a radius of the circular seat and a pocket for the wheels on a tangent to the circumference. Finish these, and the lower half of the chair is complete. 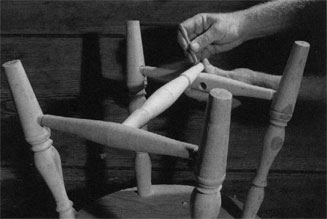 Set in the side stretchers and bore between them to insert the middle stretcher. Now we move on to the top. Because of the way we laid out the seats, there is no center mark on the upper surface where we need it. You can use a square to locate the center of an existing circle such as this. Set the square so that its corner touches the circumference and the two arms cross the circumference at equal lengths. Mark the places where the arms cross the circumference and draw a line through these two points. Now turn the square and repeat the process at approximate right angles to the first line. The intersections of the two lines should be dead on center. 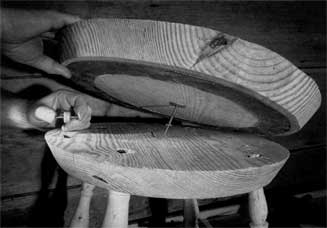 The seat swivels around a central axis, riding on six wooden rollers inset into the upper surface of the base. 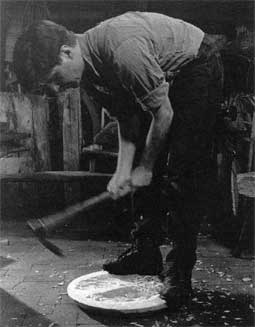 Rough in the contours of the seat with a curved adze. A large gouge and a mallet will do the same job in short order.