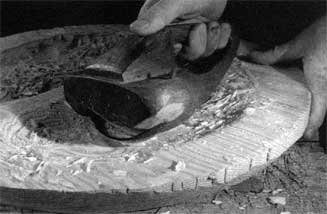 Various shaves will help you smooth the interior contours of the seat. From this center, you now need two new circles. The outer circle is one inch in from the rim and defines the locations for the spindles. The inner circle, two inches in from the rim, defines the scooped-out area of the seat. Seat scooping is the part of Windsor work that 1 enjoy most. I work mostly down across the grain of the wood, so 1 begin by drawing a line from the center across the grain to what will be the center front of the chair. This line will remain as I scoop out and back to a depth of an inch or so at the deepest point. So far we have worked with relatively available tools, but here you may be put off by thinking you must have a curved adze and the sorts of specialized planes and shaves that I use. These tools do make the hollowing easier and faster, but you can do just as good a job with a gouge, a mallet, and a curved scraper. I'll just go through some of the variety of tools because they are interesting, and worth having if you plan to do a lot of this sort of work. 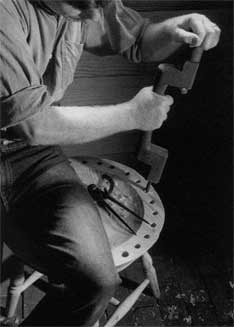 Use a large compass to define the circle of spindles around the seat, then use a pair of dividers to pace off the locations for the two arm I start with a bowl adze, working from the outside toward the middle from all around, and then scooping out across the grain. A bowl adze is just like a heavy gouge on the end of a stick that you swing into the wood, chopping out the hollow. I follow this with a broad gouge and even out any irregularities left by the adze. Following the gouge, I have curved inshaves and scorps that are the convex equivalents of drawknives, and a variety of convex spokeshaves to follow the knives. Finally, I use a plane that has a convex bed that smooths the hollows, and the finishing touchesgo in with a curved scraper. The common denominator with all of these tools is that they need to travel down the grain or across it, not up from the bottom.

The thirteen spindles of the back surround half of the perimeter of the seat, with two arm posts at either end, making a total of fifteen equal divisions to pace off with your dividers. Keep trying and resetting the dividers until you make it halfway around the circle in fourteen paces. When you get it right, mark in deeply to show where to bore the spindle holes. 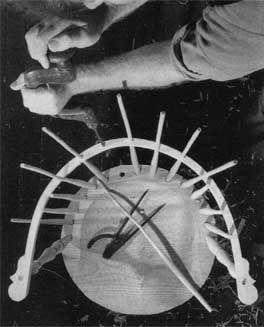 With the arm rail in place on its posts, pace off equal divisions for the spindles along its length and bore through at the angle required.