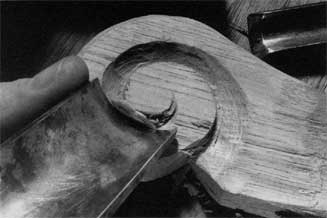 After bending the crest rail, saw its outline and sketch the volute on the ears. Strike down on the lines with a señes of gouges. The position and diameter of the arm rail determines the angle of the arm posts and establishes much of the shape of the chair. Mark the arm rail with a corresponding fifteen equally spaced points around its length, just as you did on the seat. Prop the arm rail at the desired height above the seat, positioned exactly as you want it. From here on, starting with the two arm posts, and continuing around the back, you need to bore the holes through the arm and into the seat at the same angle that the spindles will take. Bore the holes for the arm posts, set them in position, and then bore the holes for the backmost spindle. Work your way around, setting in spindles as you bore the holes through the arm and into the seat.

The crest rail sits atop the center seven spindles, and if you want the spindles to remain straight, the crest must be sized to match their spread. When you split out and steam-bend the crest, leave it a little longer than you think you need, and don't cut the ears on the ends until you confirm the spread of the seven central spindles. This spread determines the outermost holes within which you pace off equal divisions for the five inner spindles. Bore all these holes, then take the crest off to the bench to carve the volutes on the ears. 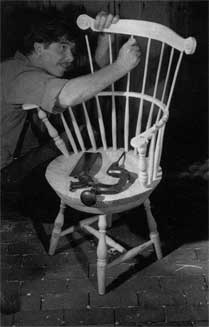 Finally, pace off equal divisions on the underside of the crest rail, and bore the holes to take the tops of the spindles. The volute is easy and quick to carve. Sketch it out with a pencil and then strike down into the line with a series of more tightly curved gouges. Now come back with the gouges to roll out the wood up to this sharp shoulder.

Finally, you will note that I have not said anything about gluing as we went. I would rather you see the whole thing complete before you glue any part of it. If you got everything perfectly proportioned on the first attempt, then forgive me—we should have glued and wedged everything as we went along. I need to wait and glue only after I have had a chance to go back and replace parts that don't seem to work with the whole. After a design has settled down, and I know I can get it like I want it right off, then it goes together once and final, as you might expect.