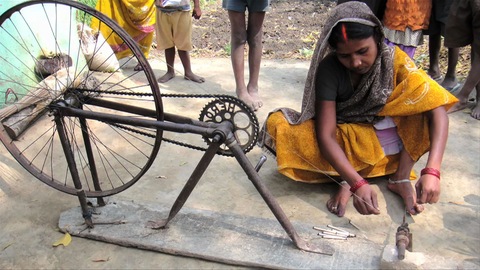 One of the participants in Nest, an organization that offers business consulting in developing countries. Photo courtesy of Nest.

Over the last six months, the PBS NewsHour’s Agents for Change series has profiled the work of highly motivated social entrepreneurs, under the age of 40, who are starting to make their mark on the world.

When confronted with entrenched social challenges like poverty, food insecurity and unemployment, these individuals decided to do something. Their passions and pursuits are diverse, but they all worked to help communities solve problems, build businesses and create jobs.

Illac Diaz is turning used one liter soft drink bottles into sources of light for people living in the slums of Manila, Philippines. He told NewsHour special correspondent Fred de Sam Lazaro, “People think it’s just a plastic bottle and a piece of sheet (metal). But they underestimate what 60 watts of brightness can do. Everybody starts feeling the effect of this. They start saving about 40 percent of their electricity.” 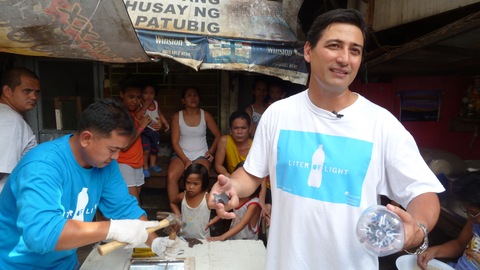 Elizabeth Scharpf developed a low-cost sanitary pad for women out of banana fibers in Rwanda. She plans to have women sell the pads in their communities to earn income. “I realized this was a global problem that not only affected productivity, but also health, education, and dignity,” she said. “It really felt like this was something that was surmountable. So that’s why I decided to do a social enterprise around it.”

Mark Ruiz has helped raise the incomes of more than a 1,000 small home-based store owners in the Philippines by offering them business training and better pricing on goods. He told the NewsHour, “All I knew is that whatever [the business] would be, it would fundamentally, at its core, have a mission to help people, and that should never be compromised.”

Donnel Baird is trying to tackle unemployment in inner-cities by training residents, specifically African American men, to install solar and energy efficiency technologies in churches, schools, small businesses and non-profits. Baird’s experiences as a community organizer in Brooklyn motivate him. “One in three men in that neighborhood was incarcerated, and so many of them who had served their time in jail had come back to the neighborhood and had nothing to do,” Baird said. “No one would hire them; they were not given a second chance.”

Jodie Wu redesigned bicycles so that peddling them also removes corn kernels from their husks. It is an innovation that could help the 500 million smallholder farmers around the world. One of Wu’s main priorities is hiring local employees in Tanzania, where her company Global Cycle Solutions is based. “They know the market much better,” she said. “In addition, [hiring local people] helps to vest the community in the success of the company.”

Ben Berkowitz developed at website called SeeClickFix where residents can post problems like pot holes and graffiti on a map, and alert other city residents, news outlets and city officials of the problem. Berkowitz came up with the idea after he tried to report graffiti to his local government in New Haven, Conn., and nothing happened. “I got the idea that my neighbors were reporting similar things, but there was no accountability and no collaborative discussion,” he said.

Rebecca van Bergen provides business consulting, financial support and retail connections to artisans in developing countries in her organization Nest. “We only work with artisans who show leadership and show scalability,” explained van Bergen. “We want them to grow their operations. We really want them to operate like a business.” 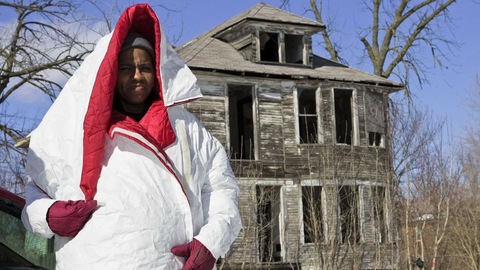 A woman wears a sleeping-bag coat. Photo courtesy of the Empowerment Plan.

Veronika Scott designed a coat that can be transformed into a sleeping bag. Her business the Empowerment Plan now employs 10 formerly homeless women in her hometown of Detroit to sew the coats, which are then distributed to the homeless around the country. “Everybody told me that my business was going to fail — not because of who I was giving my product to, but because of who I was hiring,” Scott said. “And I know my ladies enjoy proving everybody wrong.”

Jessamyn Waldman Rodriguez runs an East Harlem bakery that employs women who are recent immigrants and have little professional experience. Her company Hot Bread Kitchen makes 25 types of bread to meet growing demand. She told the NewsHour, “We have a lot of work to do in New York, and I’d like to spread the operation to other cities.”

Deepa Gangwani developed a bioenergy system in India that turns food scraps and agricultural waste into ethanol and animal feed. Her goal is to help communities generate a more stable source of electricity and provide a more dignified type of work for India’s trash collectors. “What we’re really looking to do is to leap out of this background of energy poverty to one where people could actually generate additional opportunities for their livelihoods,” she said.

When we launched the Agents for Change series last fall, we encouraged viewers and readers to nominate their favorite young social entrepreneur. We’ve gone through the recommendations and selected the next five profiles which be posted on our Agents for Change page:

Let’s keep the conversation going. Tell us about people or organizations that have been successful in tackling some of the world’s problems, such as unemployment, lack of education and access to clean water, and environmental degradation. You can post your thoughts below in the comments section or tweet us @NewsHourWorld and use hashtag #AgentsforChange.