20 songs for reading ‘There Will Be No Miracles Here’

Our December pick for the PBS NewsHour-New York Times book club, “Now Read This,” is Casey Gerald’s memoir “There Will Be No Miracles Here.” Become a member of the book club by joining our Facebook group, or by signing up to our newsletter.

Here, Gerald shares a playlist of songs to accompany you while reading his memoir. Listen to the full playlist on Spotify. 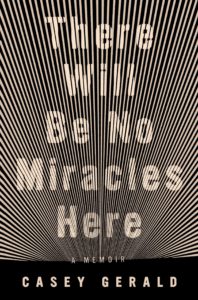 “There Will Be No Miracles Here” might not exist, at least in this form, without D’Angelo’s “Voodoo,” which I listened to on repeat nearly every day while writing the book. My understanding of what D’Angelo was trying to do with that album was exactly what I wanted to do in this project. It boils down to what was written in the album’s liner notes:

“I, personally, believe in an art as it exists in the context of the phrase ‘thou art God.’ In this phrase, art is the word that connects the individual (thou) to their higher self (God) or to that which is universal.”

If this book succeeds as a work of art, it will be because the reader is closer to their higher self when they’re done. D held the space for me to believe that was possible…imperative. He also showed the kind of rigor required to create such a work. I read about D’Angelo and Questlove spending hours in the studio, working obsessively to drum behind the beat, to create this sound that was just off-enough to enter a different space, vocals on top of vocals… controlled chaos. And they did all this in the studio that Jimi Hendrix built. We need those kinds of supernatural resources to create this work.

I take from the philosopher Ernst Bloch (via the scholar Jose Munoz) the notion that this world is not enough, and that art’s purpose is not just aesthetic, but utopian … that it uniquely illuminates the possible, the “extra” that we need to survive the “not-enough-ness” of this world … that art, like faith, is the substance of things hoped for.

So, in Chapter Five of “Miracles,” which starts Part II, I write about D’Angelo’s “Untitled.” The section opens with an epigraph from the Book of Revelation (“And I saw a new heaven and a new earth: for the first heaven and the first earth were passed away”). What follows is an attempt to see in this video what I think D’Angelo was intending … not just a carnal, aesthetic experience, but a spiritual, ecstatic experience that “takes [us] away from here … back home.”

So, in chapter five of “Miracles,” which starts Part II, I write about D’Angelo’s “Untitled.” The section is an attempt to see in this video what I think D’Angelo was intending… not just a carnal, aesthetic experience, but a spiritual, ecstatic experience that “takes [us] away from here… back home.” Not to downplay the carnal in either case—I thought through this video, I could describe a sexual awakening in a way that felt true and as overwhelmingly sublime as it was (maybe always is) in real life.

The section is just about four pages of a nearly 400-page book, but it might be the key to the whole work.

Other songs that accompany this work

1. “Everything Is Everything” by Lauryn Hill

Lauryn sings: “I wrote these words for everyone who struggled in their youth. Who won’t accept deception instead of what is truth.” That sums up my intended audience.

Kendrick says: “I’m not on the outside looking in, I’m not on the inside looking out. I’m in the dead f*****g center, looking around.” I did not want to write a dissertation on being an oppressed, marginalized person. As I say often, though I’d grown up and lived grown a poor black queer damn-near-orphan, I hadn’t lived on the margins of anything. I’d been at the very center of my experience, and wanted “Miracles” to feel like plugging into the molten core of my consciousness, and going for that ride.

If you ever come to a get-together at my grandmother’s house, you will likely hear this song.

6. “Sometimes I Feel Like A Motherless Child” by Sister Rosetta Tharpe

Sister Rosetta Tharpe is the godmother of rock ‘n’ roll, aside from being one of the first stars of gospel. Her version of this song still makes me cry, sometimes.

There is nothing like an old-school hymn, at least the way we used to sing them. That way is largely gone. Tragic.

Jay-Z was the most relevant (and genius) storyteller of my childhood, and this song is one of his masterpieces. My friends and I listened in awe, and in appreciation that somebody seemed to be talking to us.

A review of “Miracles” said, “Often, the book reads like an attempt to reconstitute the community, and communicate the experience, that the narrative of singularity would pluck him out of.” Which is a more intellectual (though no less true) way of saying that I really wanted to re-feel how the experience of being a kid, with my friends — that joy, that free-ness, even though we were, in many ways, “lost boys” that had been forgotten by the world, or even our parents. Frank does that beautifully in this song.

Frank Ocean’s “Channel Orange” is, for me, the most important cultural event of the past ten years. The way he brings original, genius artistry to the beauty and challenge of loving another boy … sets the standard.

Musiq Soulchild was my go-to love counselor as a teenager, for better or worse.

Kanye West sent a message to me and my friends, when “College Dropout” released (my junior year in high school): “’You can go to college, sure. But don’t play yourself.” Major. Loved this album, but took much longer to learn the lesson.

See reference in Chapter 15. Also, here’s the version I sang to River, by Jazmine Sullivan:

Aside from Gettysburg, this is the best presidential speech ever. Or, at least, JFK’s best speech. An early draft of Chapter 20 began with a primer on presidential speeches, just because I love them so much. That was revised away, thankfully. Over time it became clear that what I was primarily trying to do with the chapter is to trace the current disintegration of the post-war liberal-democratic order of the West. Which is an unnecessarily complicated way of saying I wanted to try to understand and explain why the world seems to have gone to s**t.

These two songs, from Ms. Lauryn Hill’s “Unplugged,” mirror the spirit and intention of “Miracles”—this attempt to remember and to rebel, which I believe have to be linked, if they will last.

I wanted to do with “Miracles” what Louis Armstrong did with “Stardust.” Listen to these two versions, and you’ll see how he took a jazz standard (a pretty boring one, IMO) and blew it open. Who wants to go back to the old Stardust?

Left: D'Angelo sings at a 2000 concert. Photo by Reuters