400 years after his death, Shakespeare’s sonnets live on in your smartphone

After William Shakespeare died, on this date in 1616, his contemporary, Ben Jonson, wrote that “He was not of an age, but for all time.” 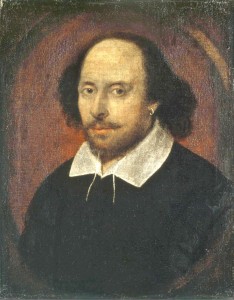 April 23 is believed to be the day of William Shakespeare’s birth and death. Photo via Wikimedia Commons

Johnson was spot on, because nearly 400 years later, the Bard lives on in the era of the smartphone.

That’s where the New York Shakespeare Exchange’s “Sonnet Project” fits in. Since 2013, the company has partnered with actors and directors from around New York City to film readings of his 154 sonnets. To date, they have recorded 102.

Each video is uploaded to a mobile app, which then notifies users that a new video is available. Ross Williams, Founder and Artistic Director of the New York Shakespeare Exchange, says he hopes to reach 1 million viewers across the globe this way.

“We realized early on that live programming has limitations: geographically, the size of a theater, how many performances we can host,” Williams said. “But with mobile technology, we can get it into people’s pockets all over the world.”

Williams’ aim is to release the final video on this date — which is also believed to be Shakespeare’s birthday — next year.

You may already be familiar with some Shakespearean poetry without realizing it. Sonnet 18 begins with “Shall I compare thee to a summer’s day?” And perhaps you read the tongue in cheek “My mistress’ eyes are nothing like the sun” (Sonnet 130, above) in a high school English class.

The Sonnet Project hasn’t gotten to No. 18 yet. They’re waiting for the perfect actor, said Williams, for what is arguably Shakespeare’s most famous poem. But as the project has unfolded, releasing a new video every week for the past two years, they’ve gained momentum. Now well-known actors seek them out, for their chance to perform a classical text in an iconic New York setting. On Tuesday, the weekly video was of Tony-award winner Joanna Gleason reciting Sonnet 23 at the New Amsterdam Theatre:

Indeed, the city of New York plays a role far greater than mere incidental backdrop. At the Project’s outset, each sonnet was paired to a specific location in the city, spanning all five boroughs and a swath of cultural and historic spots. Actors were sent to Grand Central Station (Sonnet 143), the Brooklyn Bridge (Sonnet 9) and Edgar Allen Poe’s cottage in the Bronx (Sonnet 67), to Yankee Stadium, Columbia University and Coney Island (Sonnets 13, 62, and 151, respectively). A map in the app drops a pin at each site, so users can sort the poems by geography.

He believes, too, that setting these storied, but sometimes challenging, words before a recognizable landscape will render them friendlier to a wide audience. “The locations serve as inspiration but also as a kind of grounding in a space that is … accessible to a lot of the world, because these locations are so well-known,” he said. “It allows us to look at the language of the sonnet with a new perspective.”

And once a viewer becomes familiar with a sonnet, they can apply that comfort toward exploring the Bard’s other works, Williams said.

“They’re a great gateway,” he said. “They’re little jewels of Shakespeare that can open up a larger experience.”