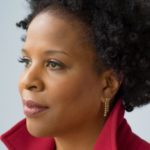 Our May 2020 pick for the PBS NewsHour-New York Times book club is Ann Petry’s “The Street,” chosen by novelist Tayari Jones. Become a member of the Now Read This book club by joining our Facebook group, or by signing up to our newsletter. Learn more about the book club here.

Ann Petry’s “The Street” was the first novel by a black woman to sell more than a million copies. But over the years, not all of its covers conveyed the complex themes of race and class.

In 1946, the publication of a novel by a black woman was a landmark event, writes contemporary novelist Tayari Jones, and its feminine cover cemented Petry’s place in an industry where men — and some white women — had historically dominated.

Below, Jones examines some of these images, from a 1954 edition depicting main character Lutie Johnson as a temptress while promising “violence” and “sin,” to the most recent edition, which, Jones says, puts Petry’s name in a font that “recognizes the significance of her contribution.” 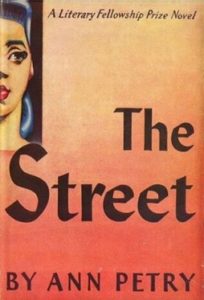 This is the original 1946 cover of “The Street.” Pink covers are frowned upon now by women writers who are troubled by being branded as “chick lit” and therefore not taken seriously. However, in 1946, the publication of a novel by a black woman was a quite an event, and the feminizing of it was also disruptive in a world where, to quote the landmark black feminist anthology, “all the women are white and all the blacks are men.” 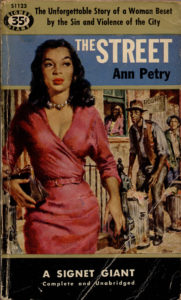 Despite Petry’s rigorous critique of the over-sexualization of black women in the American imagination, several subsequent editions presented Lutie as a temptress such as in this cover from 1954. She wears a low-cut dress over her hourglass figure. The tagline promises “violence” and “sin.” Note, the cover depicts Mrs. Hedges (the madam upstairs) and Jones (the sleazy super), but her son is missing from the tableau of her life. 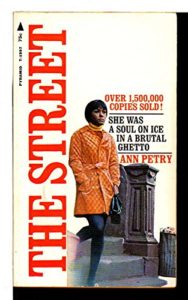 Decades after its publication, in 1985, “The Street” was given yet another facelift. In this version, Lutie’s long hair has been trimmed into a smart bob and she wears the fashion of the 1960s. She is described as a “soul on ice,” a nod to Eldridge Cleaver’s memoir of racial rage and misogynistic violence. A banner reminds us that over 1,500,000 copies have been sold. Petry’s name is in such a small font that it is almost an afterthought. 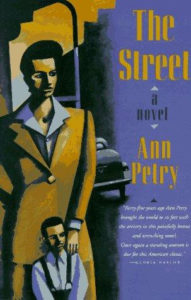 This 1992 cover features Lutie and her son. The quote on the cover is from National Book Award winner Gloria Naylor, who praises Petry’s artistry. She is dressed as though she is about to go to work to work in an office and must make difficult decisions about work/life balance. This version, destined for university classrooms, emphasizes Lutie’s motherhood, her route to respectability. 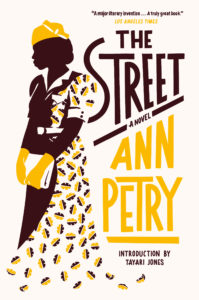 This is the image for the newest incarnation of this American Classic, published earlier this year. Lutie’s portrait is stylized and decidedly vintage. Petry’s name is, at last, in a font that recognizes the significance of her contribution.