5 things you might not know about the 19th Amendment

One hundred years ago, both chambers of Congress passed the 19th Amendment, which guaranteed American women the right to vote. The landmark amendment was ratified into the U.S. Constitution the following year, in August of 1920.

The amendment followed a decades-long fight for suffrage, as women chafed at the idea that a “true” woman was to be concerned only with the home and family, instead demanding that they be involved in public affairs. Women in the United States gained the right to vote only after New Zealand, Finland, Norway and Sweden.

Today, women voters wield electoral power. In the 2020 presidential race, women voters may threaten President Donald Trump’s bid for reelection, and for Democrats, women of color will be a key voting bloc.

To commemorate the historic breakthrough 100 years ago, the National Constitution Center in Philadelphia will open an exhibit next summer dedicated to the 19th Amendment, exploring not only the constitutional arguments that led to its passage, but also the long history of the fight for women’s suffrage, and how the battle for equality remains ever relevant today. 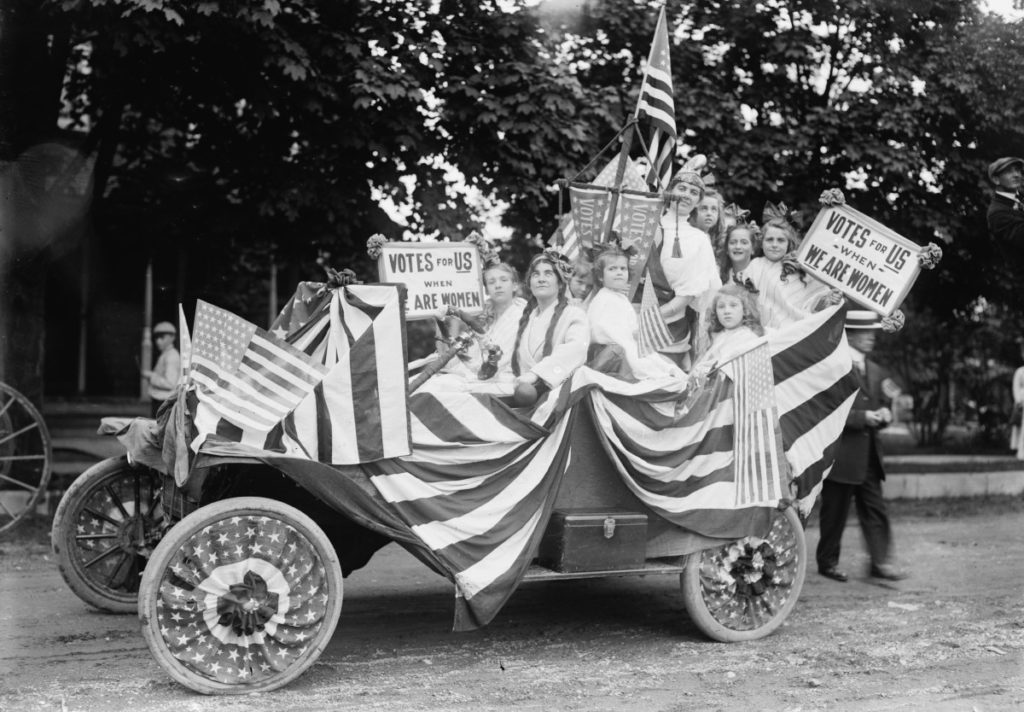 Dozens of artifacts will be on display, including an early ballot box used to collect only women’s ballots, a copy of the “Declaration of Sentiments,” an important 19th-century document asserting women’s rights, and a wide array of paraphernalia used in the women’s suffrage movement, including banners, playing cards, postcards, even a paper cup that reads, “Drink to the Success of the Empire State,” after New York granted women the right to vote.

And of course, there will be an original copy of the 19th Amendment, from the state of Pennsylvania.

The exhibit won’t open until next summer, but the PBS NewsHour talked with the center’s president and CEO Jeffrey Rosen and exhibit developer Elena Popchock, who shared six facts about the 19th Amendment you might not know.

1. The fights for racial and gender equality have a shared but contentious past.

“Before the Civil War, the two movements were aligned in mission,” Popchock said. “The pivot point happened during Reconstruction, and during the debates over the 14th Amendment. This is when gender was first introduced to the Constitution and women were left out. Then you had all these splits over who was going to get which rights.”

Rosen added that as a result, some women decided to tolerate the rise of Jim Crow, laws that enforced racial segregation, in exchange for earning voting rights for women.

Rosen noted that the last speech of Douglass’ life was on women’s suffrage, at the National Council of Women in 1895, before he died of a heart attack later that night.

Popchock said that female activists of the day largely learned petitioning and political protest by participating in the abolitionist movement.

“It became obvious to both movements that since the Declaration of Independence said all people are endowed with the same rights, that they were all just as entitled to equality,” Rosen said. “And it is clear that those debates about equality are just as present today, if not more so.” 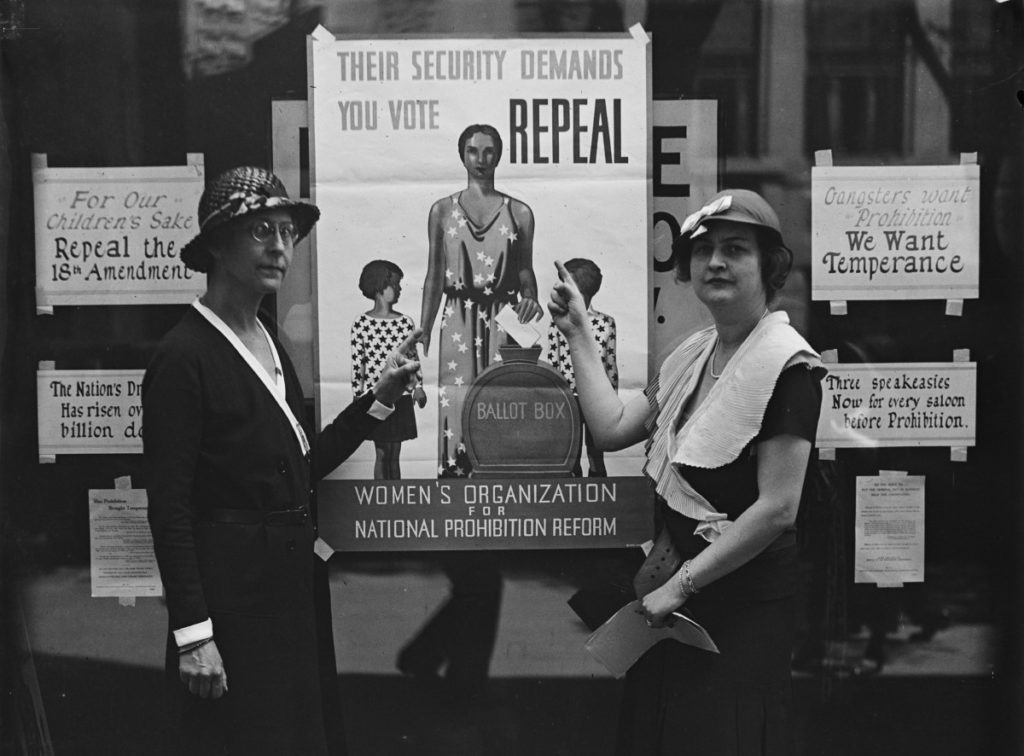 2. The right to vote wasn’t the top priority of the women’s equality movement when it started.

“The fight for voting rights wasn’t the main focus of the women’s rights convention at Seneca Falls in 1848,” Rosen said, referring to a major convention that was held to discuss the need for social and civil rights for women, and which laid the groundwork for the 19th Amendment. In fact, Rosen said, it was just one demand among many.

Popchock said this was because women had higher priorities. “It was perfectly reasonable at the time to believe that husbands represented their wives and their children. And so the focus was much more on the civil rights of married women,” she said. For example, some argued that the right to sue or be sued, or the right to property, was far more important than voting.

3. Women tried casting votes before it was legal.

“Hundreds of women tried to vote during the Reconstruction era, between the 1860s and 1870s, believing that the 15th Amendment, which said the right to vote would not be denied on the basis of race or color or prior servitude, had guaranteed it,” Rosen said. It didn’t.

Two voting rights bills had been introduced in 1868 that would have granted women the right to vote, but they did not pass. “By the spring of 1919, 15 states allowed the right to vote, so there was partial suffrage then, but not full suffrage until the 19th Amendment,” Rosen said.

Among the women who tried to vote before the 19th Amendment’s passage were Susan B. Anthony, who Popchock said was famously arrested and fined for her effort, and Mary Ann Shadd Cary, an abolitionist and the first African American newspaper editor in North America, who succeeded. Cary actually voted in multiple elections before the nationwide right to vote was established. 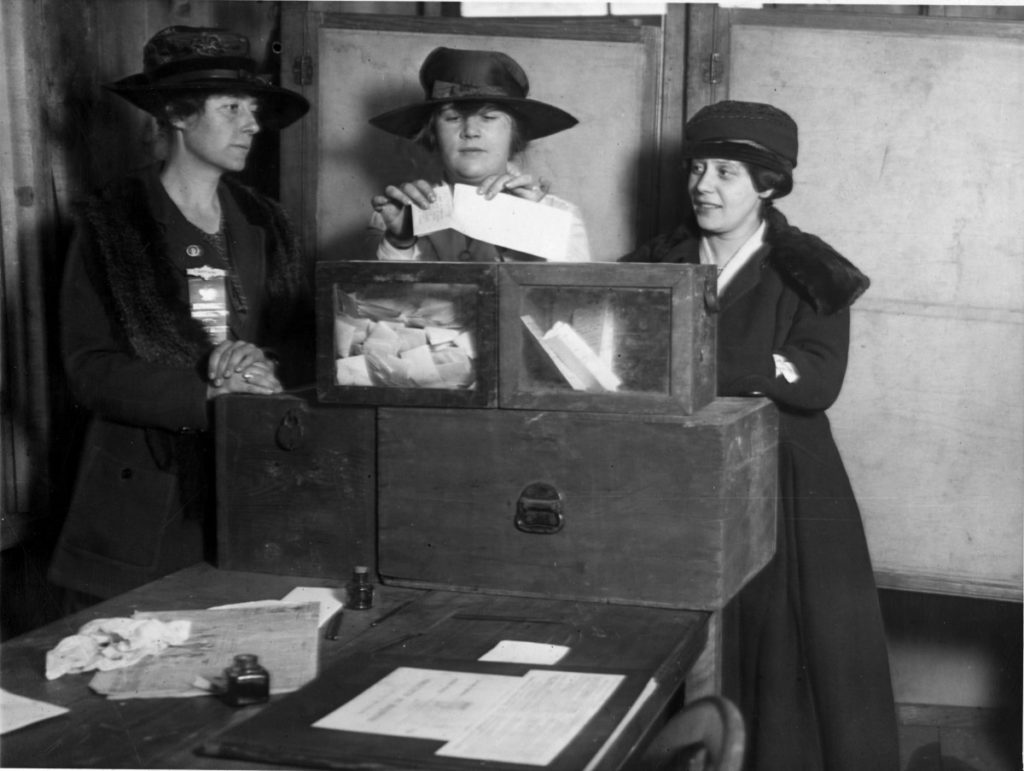 Three suffragists casting votes in New York City in 1917. The original news caption read, “Calm about it. At Fifty-sixth and Lexington Avenue, the women voters showed no ignorance or trepidation, but cast their ballots in a businesslike way that bespoke study of suffrage.” Photo courtesy Library of Congress/ National Photo Company Collection

4. Even though the 19th Amendment granted voting rights to women nationwide, states still had leverage to discriminate.

“The 15th and 19th Amendments actually just say what states can’t do,” Popchock said. “They say that they can’t discriminate on the basis of race and gender. But states can use other means to discriminate. They could use poll taxes to stop the poor from voting, or literacy tests [to block those with less education]… African American women were virtually excluded at that time.”

Rosen added that it was because so much leeway was left up to the states that racial discrimination was able to proliferate in the coming decades. Ultimately, these issues led to the passage of the Voting Rights Act in 1965, which strengthened legal protections for black voters.

5. The passage of the 19th Amendment came down to just one vote.

“It came down to one vote in Tennessee — one representative who flipped his vote — because three-fourths of the 48 states needed to pass it,” Rosen said.

Tennessee state representative Harry T. Burn had planned to vote against the amendment, but ultimately decided to vote “aye,” supposedly because of a letter in his pocket from his mother asking him to be a “good old boy” and grant her the right. His vote made all the difference.

“It almost sounds too good to be true,” Popchock said. “But it is. And it was a beautiful moment.”

Left: Mrs. Suffern, wearing a sash and carrying a sign that says "Help us to win the vote," surrounded by a crowd of men and boys, ca. 1914. Photo courtesy Library of Congress/ Bain News Service