This year marks 100 years since the end of World War I, the first time women were directly involved in the war effort. Women all over the world served in some way during the conflict — 25,000 of them were Americans who worked as Army nurses, Navy yeomen, Marine reservists, social welfare volunteers, among other positions. 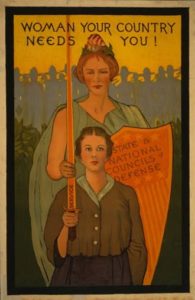 A 1917 poster. Photo courtesy the Library of Congress

Despite their contributions, women were given unequal opportunities in work and benefits. And a detailed estimate of women’s total efforts is hard to come by.

In Washington, the National Postal Museum, in collaboration with the Women In Military Service for America Memorial Foundation, is highlighting the centennial by focusing on the war’s forgotten women. The museum’s new exhibition, “In Her Words: Women’s Duty and Service in World War I,” highlights the wartime experiences of four American women, including two Army nurses, a Navy yeoman and a YMCA volunteer, through their letters and their writings.

Lynn Heidelbaugh, curator of the National Postal Museum exhibit, shared with the PBS NewsHour 6 books that explore women in the war. In her words:

1. “Finding Themselves: The Letters of an American Army Chief Nurse in a British Hospital in France” by Julia Stimson (1918)

It was published in 1918 and it’s a collection of the letters the nurse sent to her family between 1917 and 1918. Her father published it in order to better inform the American public about what was going on in the war at the time. In the fall of 1918, Julia Stimson was offered the promotion to chief of the U.S. Army Nurse Corps. She wrote to her parents about the promotion in a letter featured in another National Postal Museum exhibit.

This book is privately published and is a family history done by the niece of Helen Fairchild. She traces her aunt’s work as an army nurse in France, where she died during the war. It includes original letters and the author uses the technique of imagining letters to tell more about World War I. It’s an interesting mix of family history and imagined history.

3. The short story “Zone,” from “The Forbidden Zone: A Nurse’s Impressions of the First World War” by Mary Borden (1929)

It gives such a compelling vision of what a nurse had to do to multitask and compartmentalize work with patients as men came into the hospital. It’s inspired by Borden’s own work in a field hospital in France in 1914.

It’s about two Australian sisters who served in Gallipoli and the Western Front. The author talks about borrowing from the journals of the time and their influence on how he wrote it. Being from the Postal Museum, I particularly liked how he used letters in the narrative.

It’s the first in a series of mysteries about Maisie Dobbs, who becomes a private investigator in the late 1920s. She had been a nurse during the war and the book discusses her wartime experience. The case she investigates also deals with veterans — several years after the war, they are still feeling the effects of war emotionally and physically.

It’s a history of the U.S. Army Signal Corp female telephone operators in France. The women understood they were in military service, but were not officially recognized until the 1970s, when they got their full veterans benefits.

Left: Elsie Knocker and Mairi Chisholm in their ambulance driver uniforms and helmets in Pervijze (Pervyse), West Flanders, Belgium on July 30, 1917 during World War I. The women were part of the Women's Emergency Corps. Photo courtesy the Library of Congress