“Jaws” had most people freaked out about going in the ocean for the good part of the summer. A walking Kool-Aid Man made his first appearance on TV. The Cincinnati Reds were baseball’s World Series champs.

When it came to women’s fashion, jumpsuits were all the rage. And Margaret Thatcher would become the first woman to head a political party in the U.K.

While the explosive operatic rock ballad was quickly a hit in the band’s homeland, it took longer – more than a decade – for it to rise just shy of the top spot on U.S charts.

A new set of fans was exposed to the track with fantastical lyrics in the 1990s, when the song was re-released in 1991 following lead singer Freddie Mercury’s death and featured in the 1992 film “Wayne’s World”.

No one will ever know exactly what Mercury had in his head when he began working on the song – originally called “Cowboy Song” – in the 1960s.

According to the BBC, he never explained the song’s meaning to his bandmates Brian May, John Deacon and Roger Taylor–although Taylor hinted that he knew what it was about in a 2004 BBC Three documentary. Instead, Mercury wanted listeners to decide what it meant for themselves.

What we do know is that the song had a lasting effect on pop culture. Here are eight things you might not have known about the epic single. 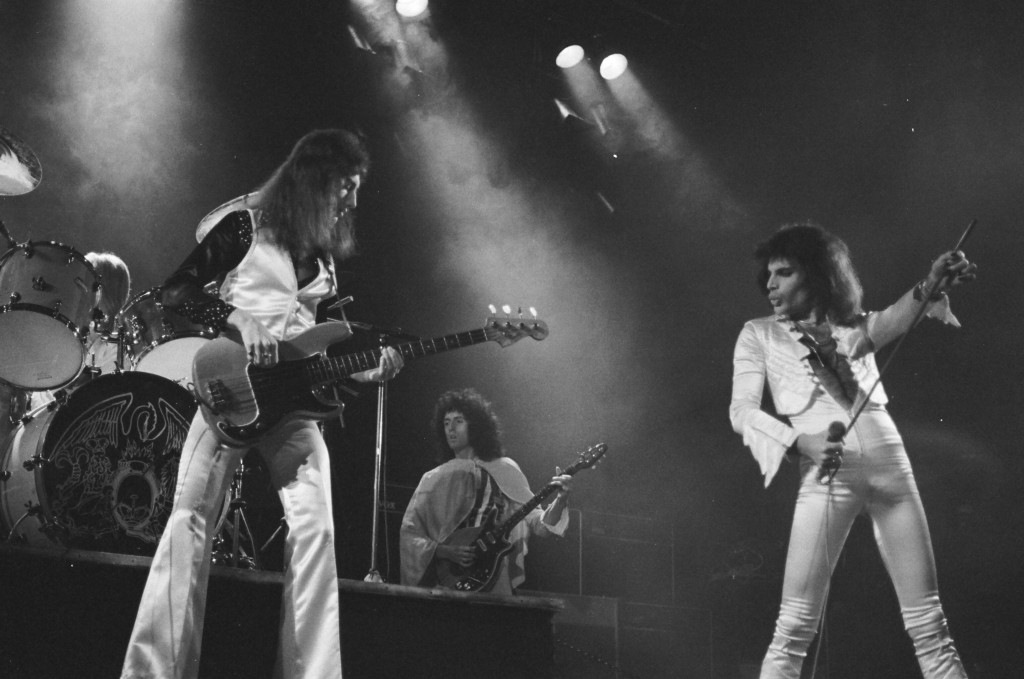 The band’s historic concert at the Hammersmith Odeon (now the Eventim Apollo) in 1975, when they played “Bohemian Rhapsody” live for the first time. Image courtesy of Queen Productions Ltd.

1. Those aren’t a bunch of nonsensical words being uttered, “scaramouche” actually means something.

Typically dressed in all-black, he was known for creating, and then worming his way out of sticky situations, often to the detriment of others. The term is usually associated with Italian actor Tiberio Fiorillo, who was well-known for his performances as a scaramouche throughout the 1600s.

Bismillah means “in the name of Allah”. It is the phrase used at the start of the Muslim holy book the Quran. Many Muslims say it before undertaking a task and it can be used in a similar way to the Christian “Grace” in order to give thanks before a meal.

2. Nearly everyone from the Muppets to an A Capella scientist has covered the song.

There are tens of covers of “BoRhap”, as it’s known to some super-fans.

A 2009 video of the Muppets performing the song garnered more than seven million views in its first week online, according to Time. It was the first web video for Jim Henson’s popular characters and has received a little more than 47 million hits to date.

They changed some of the lines of course. Instead of “Mama, just killed a man,” Animal simply repeated the word “mama.”

Perhaps one of the most educational covers is “Bohemian Gravity” by Tim Blais. Also known as A Capella Science, Blais has a Master’s in theoretical physics and used the melody to explain aspects of quantum mechanics.

Maybe Queen’s Brian May, an astrophysicist himself, is a fan of the cover.

Jonathan Groff, currently on Broadway as King George in the musical “Hamilton,” performed the song in an episode of TV’s “Glee.”

And CollegeHumor set the song in a university fraternity house for the 2007 spoof “Brohemian Rhapsody”.

3. A band member’s voice is missing.

John Deacon, the band’s bassist, didn’t sing on the single.

But then again, he didn’t sing any lead vocals for Queen.

Deacon wrote Queen’s “Another One Bites the Dust” and “I Want to Break Free”.

4. If the label EMI had its way, the song wouldn’t be exactly as it is today.

John Reid, EMI’s manager at the time thought the song – at 5 minutes, 55 seconds – was too long, according to Universal Music.

He requested it be cut down.

Before edits could happen, DJ Kenny Everett played the song in its entirety on London’s Capital Radio.

After airplay, record stores were flooded with requests for the single.

The song by Swedish pop group Abba put an end to “Bohemian Rhapsody’s” nine-week reign of the U.K. charts at the end of January 1976.

When the song was re-released in the U.S. in 1992 to coincide with its appearance in “Wayne’s World”, it rose further, to No. 2.

What song stood in its way to No. 1? That would be Kris Kross’s “Jump.”

6. A rare, blue vinyl edition of “BoRhap” could get you several thousand dollars.

In 1978, EMI received an award from the British monarchy.

To celebrate, label executives and bands went to a fancy dinner in London’s fashionable West End. Guests were given special, limited edition copies of Queen’s most recognizable tune on blue vinyl.

Included with the 7-inch record were a box of matches, pen, goblet, menu cards and handkerchief, all of which could fetch the owner up to 5,000 pounds ($7,700), according to the Guardian.

In 1992, the unforgettable car singalong in “Wayne’s World” took about 10 hours to shoot, director Penelope Spheeris told the BBC. Afterward, there were complaints from the actors of sore necks and headaches from all the headbanging.

Mike Meyers, who played the film’s title role revealed to Vanity Fair in 2014 that the song was nearly replaced with a Guns N’ Roses track.

8. What do Liza Minnelli and Marlene Dietrich have to do with “Bohemian Rhapsody”?

According to the 2004 BBC Three documentary, Mercury was listening to the soundtrack for “Cabaret” that featured Minnelli, while he worked on the song’s musical composition in 1975.

In his London home, where he did most of the work, Mercury slept in front of a piano, which doubled as his bed headboard. When he was inspiration-struck in the middle of the night, he’d sit up, and reach back behind his head to play the piano.

A picture of Marlene Dietrich from 1932’s “Shanghai Express” provided inspiration for the “Queen II” album cover in 1974.

Shot by Mick Rock, the photographer was tasked with resurrecting the look and feel of that dramatic image that had the band members’ faces emerging from a black background for the “Bohemian Rhapsody” video.

Interested in listening to other hits from the Queen songbook? Check out our Spotify playlist below.