8 things you didn’t know about the electric guitar

On July 25, 1965, Bob Dylan took the stage at the Newport Folk Festival and plugged in his electric guitar for what many consider to be the first time. The folk artist turned in his flannel shirt for a black leather jacket and launched into a sneering, distortion-filled electric guitar set. 50 years later after his legendary performance, here are eight electric guitar-related facts to consider the next time you plug in:

1. Most people misunderstand who invented the electric guitar.

The idea of using electricity to create louder string instruments already existed by the end of the 19th century, according to the Smithsonian. Les Paul is often credited with inventing the electric guitar and did pioneer the solid-body electric guitar; however, musician George Beauchamp and electric engineer Adolph Rickenbacker were the first to actually achieve the modern electrically amplified guitar with good sound quality. After plenty of experimentation, the two finally invented an electromagnetic device that amplified the vibrations of the guitar strings at a good quality. In 1931, they introduced the Rickenbacker Electro A-22, or what they called the “Frying Pan,” which earned its nickname because of its circular body and long neck.

2. One of the first electric guitars only involved an acoustic guitar and a block of wood.

In 1940, Les Paul mounted strings on solid block of pine to minimize body vibrations on an electric guitar called “The Log.” He made it by literally putting a 4×4 block of wood in the middle of a wooden acoustic guitar. Although it was not the first electric guitar ever invented, it was one of the newest electrified instruments to the music scene. 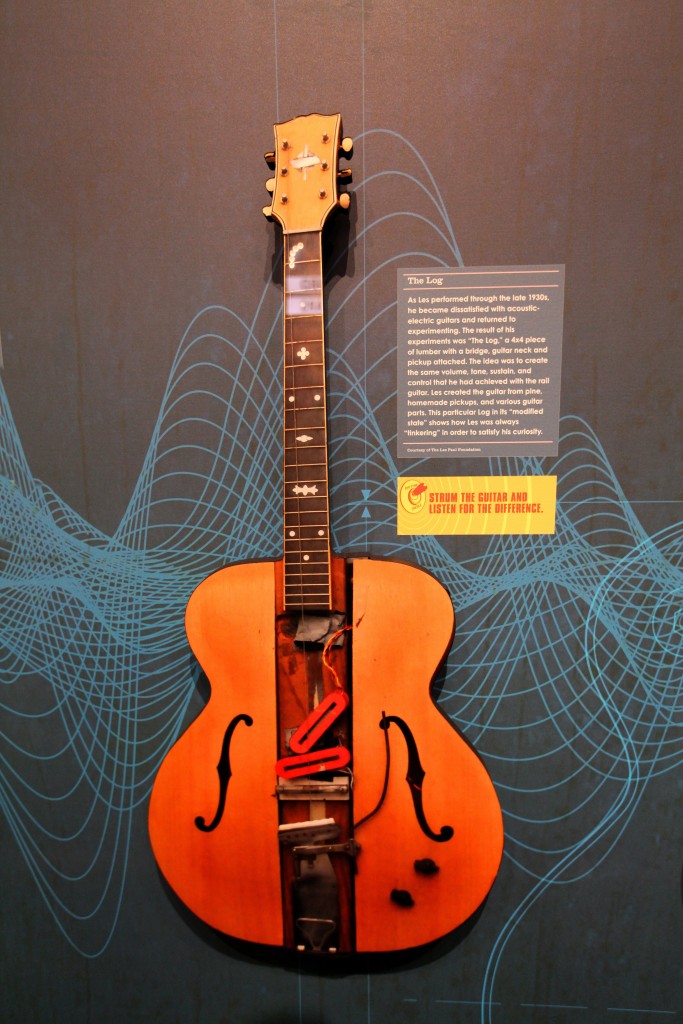 The Log, a 4×4 piece of lumber with a bridge, guitar neck and pickup attached, is featured in the Les Paul exhibit, “Les Paul: The Wizard of Waukesha” in Waukesha, Wisconsin, on June 8, 2013. Photo by Raymond Boyd/Getty Images

3. The science behind the electric guitar: electromagnetism.

Playing guitar is really a science. Here’s why: electric guitars are steeped in electromagnetism, a physical force that governs electrically charged particles. If you look closely at where guitarist strums, you might notice two or three Twinkie-shaped strips. Those are pickups, and instead of gooey filling, they’re packed with six magnets wrapped in ultrathin copper wire. The pickup emits an invisible and stable magnetic field, which is disrupted by the vibrations of a plucked guitar string. Thanks to Faraday’s Law of Induction, when particles in a magnetic field move, they generate electricity. This juice is carried by the pickups into an amplifier, which boosts the small electric current and sends it to the loudspeaker, making the electric sound.

But how is this electricity translated into different notes? Well, a guitar string’s sound is determined by its rate of vibration or frequency. A deep-sounding A string vibrates slower than a high-pitched B string. So when an A-string plays its disturbs the pickup’s magnetic field at a slower rate (or frequency) than a B string. The electric current generated by the pickup adopts this frequency too, creating different electric notes for the amplifier.

4. Rockers were not the first musicians to champion the electric guitar in the instrument’s early years.

When the electric guitar was new on the music scene in the 1930s and 1940s, jazz musicians, blues artists and country stars were the first to include it in their songs. Other famous musicians to use the electric guitar in its early years are jazz artists Eddie Durham and Oscar Moore, country stars Noel Boggs and Merle Travis and blues artists T-Bone Walker and Muddy Waters.

5. For many musicians, a guitar’s look is as important as its sound.

By the 1980s, guitarists seemed to be just as concerned about the look as they were about the sound of their axes, transforming the role of the guitar into more of an identifying signature. Eddie Van Halen decorated his guitars with colored tape and named two of his custom guitars Frankenstein and Frankenstein 2. The guitars were known as the “Frankenstrats” because they were Van Halen’s attempt to combine the sound of a classic Gibson guitar with the physical attributes of a Fender Stratocaster. He would paint the guitars, and then place tape over them to finish off the design.

When Bob Dylan performed a rock ‘n’ roll set at the Newport Folk Festival, the crowd had mixed reactions, simultaneously shouting and booing at the genre-bending performer. Singer/songwriter Pete Seeger, who was on the sidelines, was rumored to have complained about the new sound. Some accounts say that “Seeger was looking for an axe so he [could] literally chop his electric cords to cut off the sound,” Riley said. Seeger himself has disputed the story, saying he was onlycomplaining about the poor sound quality at the festival.

The electric guitar was considered to be reckless and flashy during the time, and when Dylan went electric, many folk fans called him a sell-out, likening him to popular sensation the Beatles, according to NPR music critic Tim Riley. Dylan refused to return to the Newport Folk Festival until 2002.

7. The Fender Stratocaster that Dylan plugged in at the festival is the most expensive guitar ever sold at auction.

Dylan’s guitar sold for exactly $965,000 in Dec. 2013 through Christie’s Auction House. Before that, the most expensive guitar sold at an auction was Eric Clapton’s “Blackie,” a custom-made black Fender Stratocaster, which sold for $959,500 in 2004. Clapton’s guitar was assembled from different parts of three different Strats. After he retired his beloved instrument in the mid-1980s, it was sold at Christie’s auction in support of Crossroads Centre, the addiction rehabilitation center Clapton founded.

Along with Dylan’s guitar, Christie’s auctioned handwritten and typed lyric fragments found inside his guitar case. They were early editions of some of Dylan’s songs. One of the five fragments sold for $20,000. It contained draft lyrics for “I Wanna Be Your Lover.”

8. You can make an electric guitar yourself from an acoustic guitar and a vinyl record player.

Left: Bob Dylan plays a Fender Stratocaster electric guitar for the first time on stage as he performs at the Newport Folk Festival with guitarist Mike Bloomfield on July 25, 1965 in Newport, Rhode Island. Photo by Alice Ochs/Michael Ochs Archives/Getty Images