8 things you didn’t know about Charles Schulz and ‘Peanuts’

The audacious Snoopy. Bossy Lucy. And Good Ol’ Charlie Brown. These characters, their quirks and their signature sayings have appeared throughout pop culture for more than 65 years.

“The Peanuts Movie” came out this week, a CGI adaptation of the popular comic strip by Charles Schulz. “Peanuts” debuted in seven U.S. papers in 1950. Nearly 18,000 strips later, the comic strip had been translated into more than 20 languages and had a readership of 355 million people in 75 countries. After Schulz died in 2000, media scholar Robert Thompson on the NewsHour compared the 50-year story of Charlie Brown and his friends to classic 19th-century epic, calling it “arguably the longest story told by a single artist in human history.”

Below, check out some things you might not have known about that story and its creator.

The 20th Armored Infantry Division, where Schulz was a staff sergeant, played a role in liberating the Dachau concentration camp in Germany. Nearly 32,000 people died at the camp during its 12 years of operation, and 30,000 survivors were inside the camp at the time of liberation.

Schulz’s comics held markings of his military service. He commemorated Veterans Day and referenced some of his fellow WWII veterans such as Bill Maudin, who was himself a famous cartoonist. In an interview toward the end of his life, he referred to D-Day as the “most important day of our century.”

Schulz named his protagonist after his colleague Charlie Brown at the Art Instruction Schools in Minneapolis, where he worked as an instructor following his return from the war. Snoopy was based on a black and white pointer named Spike that Schulz owned as a child, and the name came from Schulz’s mother, who had suggested the family name their next dog “Snoopy.”

The Little Red Haired Girl, who Charlie Brown pines for but who never actually appears in the comic strip, was based on Donna Mae Johnson, a red-haired woman Schulz met at the accounting department at the Art Instruction Schools and dated for three years. Schulz proposed to Johnson, but she rejected him. 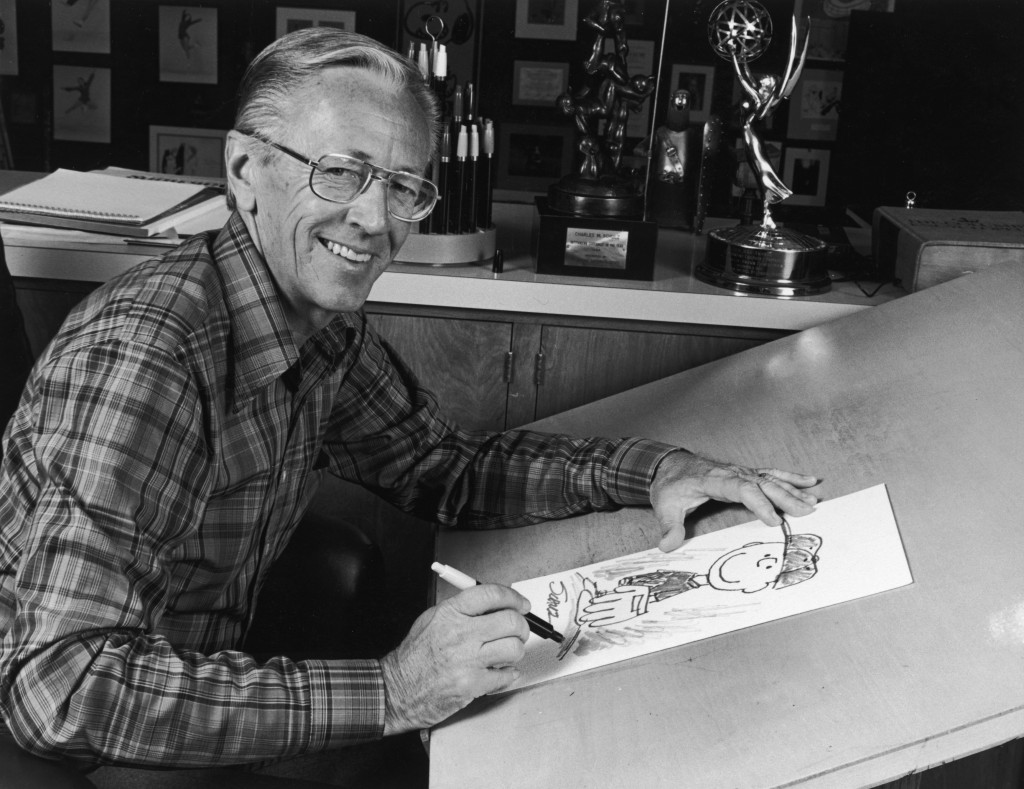 Charles Schulz, creator of the “Peanuts” comic strip, sitting at his studio drawing table with a picture of his character Charlie Brown and some awards behind him in 1978. Photo by CBS Photo Archive/Getty Images

In April of 1968, about a week and a half after Martin Luther King Jr. was assassinated, Harriet Glickman, a teacher and mother living in Los Angeles at the time, wrote a letter to Schulz urging him to add a black character. “In thinking over the areas of the mass media which are of tremendous importance in shaping the unconscious attitudes of our kids, I felt that something could be done through our comic strips,” she wrote.

The two exchanged several letters, and two of Glickman’s black friends sent suggestions to Schulz on how best to integrate a Peanuts character of color. In July of that year, Franklin, Peanuts’ first black character, made friends with Charlie Brown when the two built a sand castle together on the beach. 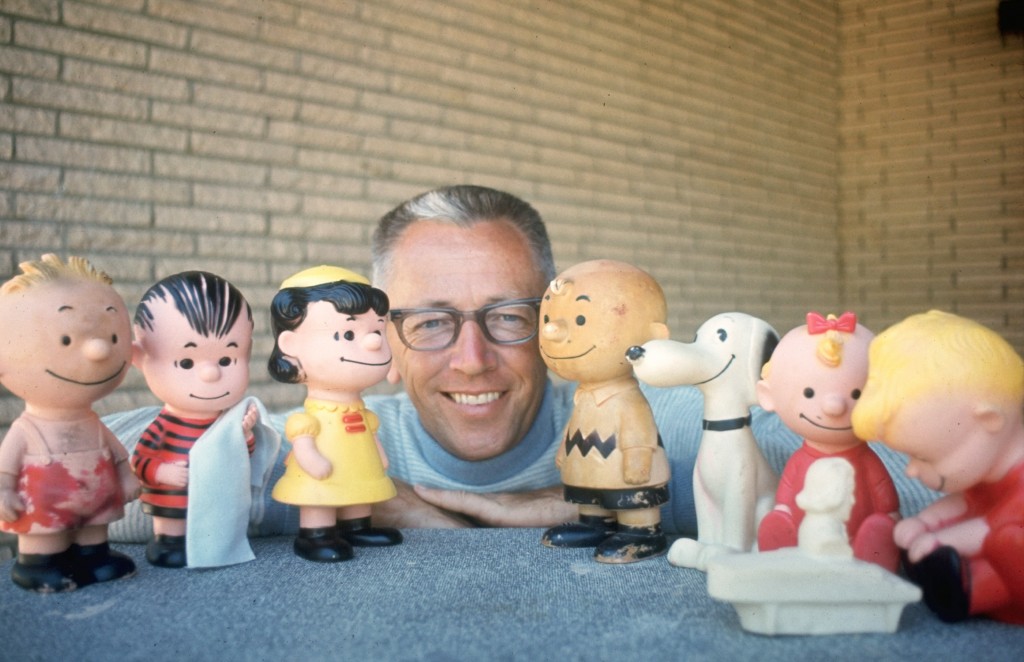 Schulz with a few of his Peanuts characters on Jan. 1, 1962 in Los Angeles. Photo by CBS via Getty Images

Legend has it the award-winning American jazz pianist Vince Guaraldi was commissioned to write the score for “A Charlie Brown Christmas” (1965) after Lee Mendelson — a TV producer who was working on a documentary about Schulz at the time — heard Guaraldi’s song “Cast Your Fate to the Wind” while driving across the Golden Gate Bridge.

That song, and others that Guaraldi would write for the Peanuts TV specials, inspired other jazz musicians to do the same, including Wynton Marsalis, George Winston, David Benoit and Cyrus Chestnut. Columbia Records also produced a Peanuts album in 1962 featuring Italian-American actress Kaye Ballard and songwriter Arthur Siegel performing as Lucy and Charlie Brown. On the record, their voices are backed by music composed by Fred Karlin, who used clanks, beeps and ringing bells played on toys, household objects and musical instruments for the scoring.

5. Ronald Reagan was a fan of Schulz.

The former governor of California once wrote a fan letter to Schulz saying he identified with Charlie Brown as a character. In 1967, the state legislature declared May 24 Charles Schulz Day in California. Several years later Reagan personally called the cartoon artist while he was in the hospital recovering from heart bypass surgery to wish him well.

6. Schulz died a day before his final strip was published.

In the 1990s, Schulz’s health problems mounted. A stroke in November in 1999 impacted his vision and memory, and the following month, he announced his retirement. Schulz died on Feb. 12, 2000, of colon cancer, one day before his final Sunday strip was published — his 17,897th Peanuts strip. 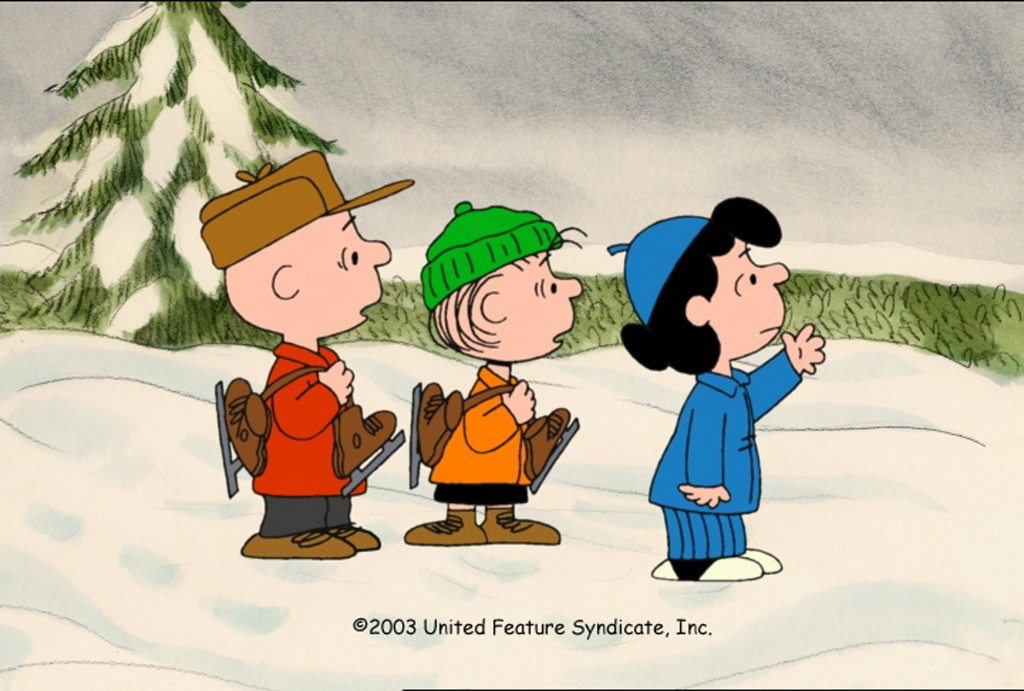 An image from “I Want a Dog for Christmas, Charlie Brown!” The 2003 film centers on ReRun, the lovable but ever-skeptical younger brother of Linus and Lucy, and his adventures with Snoopy over Christmas vacation. Photo by ABC Photo Archives/ABC via Getty Images

7. The actor playing Linus in this year’s movie was partly hired for his lisp.

The filmmakers wanted the movie to feel like it was straight out of “A Charlie Brown Christmas,” the Peanuts’ iconic Christmas special. Director Steve Martino was particularly worried about the casting for Linus Van Pelt, Charlie Brown’s blanket-handy friend. “I thought Linus was so charming in the Christmas special. He had that little lisp, and I wondered if we were going to be able to find that,” Martino told CW Atlanta.

Alan Gardin got the role, in part because his natural lisp sounded like Linus, Martino said. In another nod to the characters’ original sound, the actors were recorded with old-fashioned ribbon microphones. Snoopy’s voice along with his friend Woodstock were replayed from recordings in the original special.

8. Snoopy’s doghouse in the film stayed true to Schulz’s original.

The filmmakers tracked Schulz’s wobbly lines directly from his works, including his depiction of rain and Charlie Brown’s hair strand. The film doesn’t show the bottom lines of the doghouse during his aerial duels with the Red Baron, staying true to Schulz’s original depiction.

Left: Snoopy, Lucy, Charlie Brown and Linus are a few of the most beloved characters from Charles Schulz's "Peanuts." Photo by Erich Kocian/Getty Images