A Bone to Pick With Genocide? Try a Million 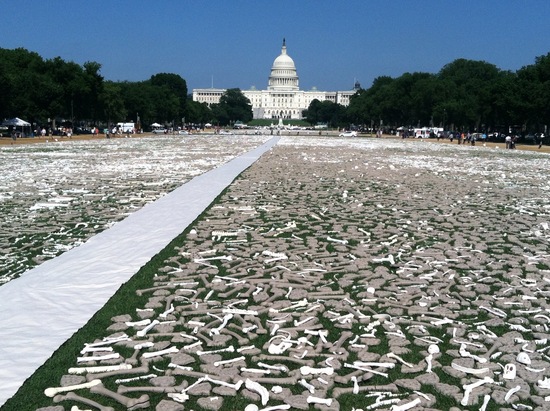 An installation of handmade bones was laid out on the National Mall to protest genocide. The effort was organized by One Million Bones. Photo by Simone Pathe.

For 48 hours, the grass on the National Mall disappeared underneath a sea of white and grey “bones,” a symbolic mass grave on the footsteps of the U.S. Capitol. The One Million Bones project is a public art installation created to protest genocide and raise awareness of ongoing violence in the Democratic Republic of the Congo, Sudan, South Sudan, Burma and Somalia.

Installation artist and activist Naomi Natale conceived of the project in 2009 while the violence in Sudan was unfolding. She was reading Philip Gourevitch’s well-known recounting of the 1994 Rwandan genocide, “We Wish to Inform You That Tomorrow We Will Be Killed With Our Families.”

“I felt moved to make the reality of what was being described [in the book into] something we in the United States could see,” Natale told the PBS NewsHour. One Million Bones embodies what Natale called “the art of the uncomfortable and the inconvenient.”

Partnering with poet Susan McAllister in her hometown of Albuquerque, N.M., Natale founded Art of Revolution, a nonprofit dedicated to using art for social change, and began organizing One Million Bones locally. From there, they branched out to New Orleans and began coordinating with 2,000 schools around the country, encouraging teachers to incorporate education about genocide and bone-making workshops into their curriculum.

“Art allows for a connection on an emotional level,” says Natale. 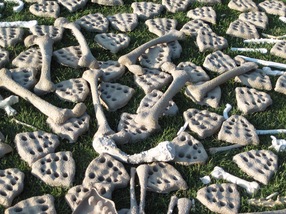 Made of clay, plaster, paper and other materials, bones were handmade by people from all 50 states and over 30 countries. Some biodegradable bones were crafted in honor of supporters who donated to One Million Bone’s activist partners, including the Enough Project and CARE.

One Million Bones has held smaller installations: 50,000 bones covered a downtown block of Albuquerque in August 2011, and blanketed New Orleans’ Congo Square in April 2012.
Their end goal was always to bring a “visible petition” to the National Mall, where volunteers, dressed in white, laid out the bones in 16 sections early Saturday morning.

“We don’t know if the bones are male, female, Jew[ish] or Tutsi,” said Congolese activist Neema Namadamu, speaking to assembled volunteers and the normal Mall traffic — joggers and tourists whose curiosity made them pause.

Despite the symbolism and scale of the installation, volunteers were upbeat, hoping their activism would help spur the international community and the U.S. to live up to the mantra “never again.”

Former UN envoy to Sudan Dr. Mukesh Kapila reflected on genocide as a crime all humans are capable of committing in his keynote address on Saturday. Despite all the optimism, “there will be more bones,” he said.

“This great nation was started by genocide,” he reminded the dwindling crowd as the setting sun cast a warm glow on the white of the lawn and the Capitol dome.

As organizers collect the bones and lawmakers return to work, will the installation have had an effect? Natale thinks so. After a day of educational seminars on the Mall, volunteers prepared to “take a bone to Congress” on Monday, having scheduled more than 70 meetings on Capitol Hill.