A Dark Abyss of Blessing or Curse

Question: I just listened to a business executive on TV say that the investment he made would return in three years based on fuel savings. Why is it that people that make financial decisions are not math savvy? The turnaround on an investment is a volatile result parametrically dependent on the economy’s changing rates of cost and price. A complex set of parametric equations which change irregularly and vary with conditions as the world changes. Things such as resources, labor rates, catastrophes, devaluation of physical property due to deterioration or damage, cost of recycling raw materials, generation of waste, etc. The list is very large.

Thus, to say that business and economics are a simple formula of passing money over time is pure fantasy and irrational nonsense.

Even experts in the subject that teach it can only admit to certain possibilities of success or failure.

An honest business simply does its budget from day to day, while realizing that the future is a dark abyss of blessing or curse.

Paul Solman: Yup. Though I’m not sure the executive sound bite you heard was a good example of your “dark abyss.” What he meant, presumably, was that his investment, based on today’s prices, would pay for itself in three years. But in general, I couldn’t agree more. The future is unpredictable, unknowable. Just look at Tunisia. Egypt. The price of gold in 1980. The Japanese stock market from 1989 to the present: down 75 percent over 22 years. 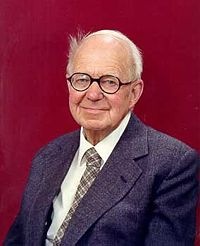 Here’s a disciple of economist John Maynard Keynes on the subject, G.L.S. Shackle, in a 1983 interview:

“I will be honest and say that I don’t think that economics can yield constants of the kind that physics does. Physicists have constants, e.g., the acceleration due to gravity, the table of atomic weights. I don’t believe that economics can have constants like that, You might make measurements which are all right for today. But, there are countless people whose interest it is to make nonsense of those measurements tomorrow.”