Our March pick for the PBS NewsHour-New York Times book club “Now Read This” is Dani Shapiro’s “Inheritance.” Become a member of the book club by joining our Facebook group, or by signing up for our newsletter. Learn more about the book club here.

When writer Dani Shapiro found out that the man who had raised her was not her biological father, the discovery had implications that reverberated throughout her entire family. For her son Jacob, who had grown up hearing stories about his deceased grandfather Paul, the revelation that he had a living grandfather immediately sparked questions about his heritage and biological relatives.

“I did find myself immediately wondering who your biological father was – and who these new people were to whom I’m biologically connected,” Jacob said in a recent discussion with his mother, who wrote the memoir “Inheritance” about the experience.

After returning home from studying abroad due to the coronavirus outbreak, Jacob joined Dani in conversation about the ways her discovery has affected his outlook on family, religion and identity.

“If anything, I feel my family has been expanded and extended as a result of your discovery,” Jacob told his mother. “It adds to my family rather than taking away from it.”

You can read the conversation in full below.

DANI: Let me start by asking you what, if anything, you felt about my father – your grandfather – while you were growing up?

JACOB: He felt like a fictional character to me, in a way. I never had met him. He died more than a decade before I was born. You’ve written about him a lot over the years, so I felt like I knew him from your writing, from reading your books. He’s also my connection to Judaism – you passed that down from him to our family – in the way you take seriously the rituals of being Jewish, celebrating holidays, that kind of stuff. I do have a vivid image of him from pictures – and also vivid images of the generations before him.

DANI: Do you remember when I sat you down as a kid to watch the documentary “Image Before My Eyes” about shtetl life in pre-war Poland? I wanted you to see it when you were a little kid because there was footage of my grandfather, great-grandfather and great-grandmother in it. I so badly wanted you to feel connected to my dad’s family, even though you never knew them.

You know what would be amazing? One day for you and me to write a memoir together, weaving our two different experiences.

DANI: So let’s talk about that. Are they your family? Or aren’t they? What changed with my discovery?
Jacob: I still feel they’re part of my family. I just got back from a semester in Europe that was cut short because of the coronavirus – but before I had to come home, one of my plans was to rent a car and drive to Belarus – I wanted to see the village the Shapiro family comes from. So I do feel that they are part of me. If anything, I feel my family has been expanded and extended as a result of your discovery – it adds to my family rather than taking away from it.

DANI: Tell me about the moment I told you that I had found out my dad wasn’t my biological father. You were 17. What was that like for you?

JACOB: Oy. I had just returned home from a high school summer program, and you asked me what I wanted to have for dinner. But you always ask me that, so I didn’t realize that this was going to be something actually serious – that you had something to tell me. I remember you told me the story slowly, laying out the pieces, and immediately I thought about you, and what a big deal this was for you. Your father was fictional to me, but he was very, very real for you. So I was worried about you. As for what it meant for me, I wasn’t sure. It didn’t feel like everything was changing. I wasn’t thinking about the documentary, and those people not being my ancestors anymore. I did find myself immediately wondering who your biological father was – and who these new people were to whom I’m biologically connected. After dinner I called one my good friends and told him what had just happened – just trying to process it. Like, what does this even mean? Other than that I wasn’t going to be bald… 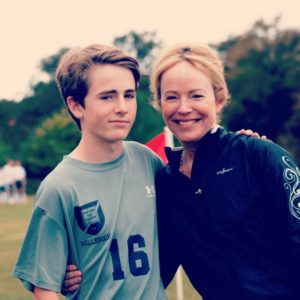 DANI: Were you actually worried about that?

JACOB: I take pride in my hair. I had noticed the photos, that your dad and your granddad were bald. So that did cross my mind.

DANI: So what’s your takeaway – what has all this made you think about some of the deeper questions: identity, nature versus nurture? I mean, you found out that one of your closest relatives – a grandparent – was a completely different person from who you had always believed. Did this make you feel any differently about yourself and what makes you up?
Jacob: I don’t think it makes me feel different. It didn’t change that much for me – I’ve always known that you’re you, and dad’s dad. You are my parents, and it couldn’t have been any other way. Unless there’s something you aren’t telling me?

DANI: Haha, right. Well, let me ask you one last question. Since people always want to know: How do you feel about my writing about you? You’ve been in a couple of my books now. What’s that like?

JACOB: I’ve never felt like my life is less private because you’ve written about me. And I don’t think you’ve ever misrepresented me. We’ve had different experiences of the same moments – because we’re different people. But I would never want to dispute the way you remember something. If I were to write about it, I might tell another story. You know what would be amazing? One day for you and me to write a memoir together, weaving our two different experiences.