Aboriginal Australian artists are having a moment in the U.S. These women are at the forefront.

Almost exactly a year ago, walking through the Seattle Art Museum with my uncle, I stopped cold in front of a piece of art called “Munurru,” or “Rough,” by Aboriginal Australian artist Galuma Maymuru. My stepfather had recently passed away; it was his birthday week, and we had come to the museum for a distraction. Grief, people have always told me, comes in waves, and I’d found that to be true. The painting, made with natural pigments on eucalyptus bark, was made up of intersecting wavy lines, like ocean currents; it seemed as if each line led into the next.

Beside the painting, a placard read: “Maymuru pulls us into high tide in deep water, where currents are colliding.” It noted the artist used a sacred signature in a cross-hatched pattern that belonged to her clan, and “women paint such patterns on each other’s chests when they are in a state of fasting,” such as “during funerals.” I stared at the piece, read the placard again, and stayed in front of it for a long time.

Aboriginal Australian art is the oldest continuous tradition of art made in the world, stretching back more than 40,000 years. Maymuru, like many Aboriginal Australian women, learned to paint the sacred clan designs from her father, a practice previously reserved only for high-ranking men. Like many female Aboriginal artists, she was also not given a chance to paint for the market until the 1980s; until then, this was the domain of men. It was around this time Aboriginal artwork began to gain popularity in the Australian art world, but in the United States, it caught on only in fits and starts. And then, in many ways, it dropped off the map.

Now, in part because of the interest of some passionate collectors and curators — who feel just as startlingly compelled by the art — Aboriginal Australian art shows, including one featuring only women, are popping up across the country.

Aboriginal Australian art can take many forms: drawing, painting, weaving, carving, or, more recently, video and photography. Artists often use natural elements, such as bark, feathers, earth pigment, flowers or sand, but they may also use synthetic materials. Styles varies widely by region; it is impossible, or at the least reductive, to try to generalize the art. But if there is one thing that binds Aboriginal Australian art together, it is that it’s expressive of the culture, and often has a deep connection to place. From collectors, what you will often hear is that the art feels both astonishingly new and deeply old at the same time.

Just this week, “Of Country and Culture,” a show of more than 100 diverse objects of contemporary Aboriginal Australian art, opened at the San Antonio Art Museum. In October, Silicon Valley’s Stephen Luczo, an electronics executive, put Aboriginal dot paintings on the market, a sale that grossed $1.5 million. Harvard Art Museums concluded a major Aboriginal Australian art show in September called “Everywhen,” saying indigenous art was “no longer positioned as ‘other’… [it] demands our critical attention.” And the Seattle Art Museum (SAM), where Aboriginal Australian art has been on permanent display for years , is preparing to send its 2012 show “Ancestral Modern” out to four more venues, to showcase “the artistic renaissance of the world’s oldest living culture.”

Pamela McClusky, who curates SAM’s African and oceanic art, says Aboriginal Australian art “came like a bullet out of the blue to a lot of people” in recent years.

“It has this visual language that is so modern, yet is referencing these knowledge systems that go back thousands of years,” she says.

“People have this idea of aboriginal art as folk art or tribal art,” he says. “I think it’s a fundamental misunderstanding.”

A well-worn story about indigenous Australian artist Rover Thomas goes that while visiting the National Gallery of Australia, he came across a Rothko painting and asked: “Who’s that bugger that paints like me?” 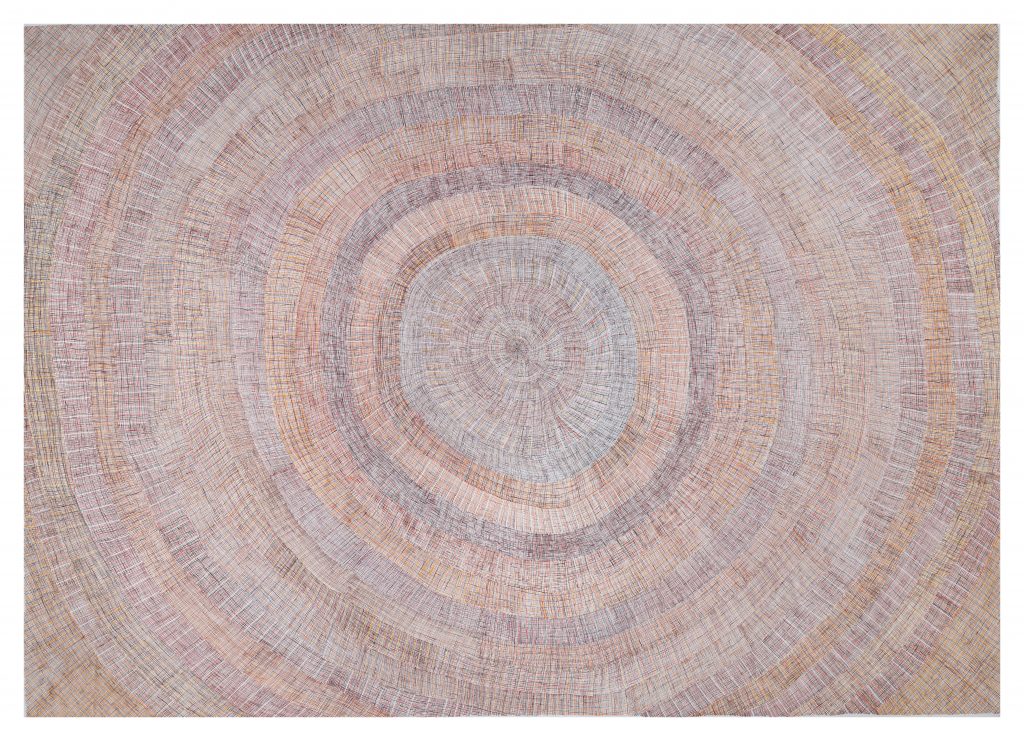 “Sun Mat,” 2015, by Regina Wilson, synthetic polymer paint on canvas.  This piece appears in “Marking the Infinite” at the Frost Museum. Courtesy: the artist and Durrmu Arts, Peppimenarti

The 70 works featured in the show range from painting to woven installations to video projections, and span subjects as large as celestial bodies to as tiny as the flower of a bush plum.

The show exists in large part because of the interest of a Miami-based collector and philanthropist couple named Dennis and Debra Scholl.

“It has this visual language that is so modern, yet is referencing these knowledge systems that go back thousands of years.”

“When I first saw this work it felt like I had been struck by lightning,” Dennis Scholl writes in the show’s catalogue. On the phone with me, Scholl was no less effusive, saying that since he’d first come across this art eight years ago, he and his wife have collected more than 500 pieces.

When a curator friend sent him to the basement of an art gallery in New South Wales, to see the Aboriginal Australian art on display, Scholl decided on the spot to “jettison everything” he was doing and collecting, because what he saw was “instantly moving at an emotional level” in a way he felt he couldn’t ignore.

No matter that he knew nothing about the art, or that few people stateside cared about it, or that it was being produced 12,000 miles away by artists who did not speak English. “Off we went,” he says.

“Ganyu,” or “Stars,” 2003, by Gulumbu Yunupingu, natural earth pigments on eucalyptus bark. This piece appears in “Marking the Infinite” at the Frost Museum. Courtesy: the artist’s estate and Buku-Larrnggay Mulka, Yirrkala

Scholl’s collection first became a nationally-acclaimed all-men’s Aboriginal art show called “No Boundaries,” which also toured the U.S. before closing in January. After that, Scholl says, he was ready to do a women’s show.

Scholl lent his pieces by female artists — steadily purchased from community art centers — to the show now called “Marking the Infinite.” Skerritt, the show’s curator, has devoted his life to understanding and promoting Aboriginal Australian art. For him, it’s a philosophical, and almost existential pursuit.

“What attracts me to this work is precisely the fact that I don’t understand it and I don’t profess to understand it, or the experience of aboriginal Australians,” Skerritt says.

“The world in which we live is more connected than ever before,” Skerritt writes. “People, information and goods circle the planet at unprecedented speeds, heightening both our sense of proximity to others” but also our “acute awareness of cultural difference.”

“In a word of accelerating connectivity, these artworks ask us to stop,” he adds.

By phone from Virginia, Skerritt walks me through some of the pieces in “Marking the Infinite,” and the contemporary messages he sees in them. A video piece called “Light Painting,” by Nyapanyapa Yunupingu, is made up of 124 drawings, displayed three at a time. To see all the variations, Skerritt says, you’d have to watch the video for hundreds of hours. To him, “Light Painting” is concerned with a very contemporary idea, which is an awareness of the passing and multiplicity of time.

Skerritt also points to “Stars,” a painting by the artist Gulumbu Yunupingu (sister to Nyapanyapa), made up of many different repeating dots and tiny figures, like stars, created with earth pigment on bark. For Skerritt, “Stars” is a cosmological piece that sends a message about today’s fractured world. “It’s saying that we are all different, but under the same stars,” he says.

Much of the art,“hide an immense depth and knowledge” that the women have, he adds. “Their work only allows a hint of it.”

It is important to note that, unlike Maymuru, most of the women do not explicitly paint the sacred designs of their clan. Instead, they delicately allude to them, in ways that only their community will recognize. And in this way, they reveal some of their culture to the outside world — but not all of it.

There are risks to exposing too much. Artist Regina Pilawuk Wilson, for example, who has five large paintings in the show, once lived on a Catholic mission she says tried to erase the culture of the Aboriginal community that lived there. When she was 25, she and her husband left to establish a new Aboriginal community in far north Australia, called Peppimenarti. When Wilson spoke to me by phone from Peppimenarti, she stressed that while her community is small — about 250 people — it remains strong.

Every morning, Wilson does her art from 8 to 11 a.m. at the Durrmu Arts Center in Peppimenarti. In the afternoons, she looks after her community, where she is a matriarch; her son is a kind of mayor. Making the art, and getting it out in the world, she tells me, is deeply important “to keeping the culture strong.” 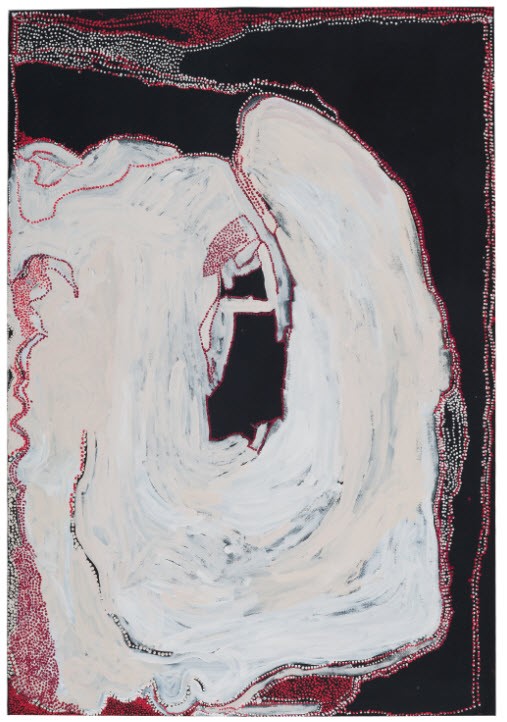 “Tjitjiti,” 2015, by Carlene West, acrylic on linen. This piece appears in “Marking the Infinite” at the Frost Museum. Courtesy: the artist and Spinifex Arts Project, Tjuntjunjtara

“We lost that stitch, when we were going daily to school,” she says. “That’s why I’m doing this painting. For our ancestors. And so that children can remember that we’ve done this weaving.”

As her paintings circulate outside her community, she says, she also hoped that Westerners can learn about her culture.

“White people are still learning about painting and weaving and our culture, just as aboriginal people, we are learning the white laws,” she says. “But aboriginal law is still the same and strong and never changed from thousands of years ago.”

As Wilson speaks, I am reminded of something Scholl says as he recalled that museum basement where he first encountered this art. He says that basement — and a 1990 MOMA art show called “High and Low: Modern Art and Popular Culture” — showed him that art works on two levels.

“It works on the level of the purely spontaneous, when you walk in and it gives you joy or troubles you … without you knowing anything about it,” Scholl says, describing almost exactly what Maymuru’s “Munurru” piece did for me. “But if you’re willing to dig in and give the time, it operates in a totally different way.”

“Marking the Infinite” is on display at the Frost Museum in Miami until May 7, 2017, and then will travel to other museums.