The gaming world put its best and brightest new offerings on display at the 2017 Electronic Entertainment Expo (or E3) last week. But some of the industry’s most anticipated games are coming to market with one noticeable change: the voice actors.

Voice actors who have a small but essential role in big-budget games have been on strike since October. Eleven video game publishers, including major players Activision (“Call of Duty” and “Skylanders”), Electronic Arts (“Battlefield” and “Madden NFL”), Take 2 Interactive (“Grand Theft Auto”) and WB Games (“Batman: Arkham” and “Mortal Kombat”), remain under pressure from the Screen Actors Guild for their treatment of union members.

Video game companies, unlike other entertainment industries, aren’t typically unionized, which means it can sometimes take a scandal to reveal problematic work conditions. Game developers reportedly experience hellish demands during “crunch” time on almost any given title; Electronic Arts came under fire in 2004 for forcing their employees to work 100 hours a week with no overtime pay. Voice actors are some of the only workers in the industry to have a union, because of their overlap with television and animation.

Because video games have a long timeline from concept to launch, developers are starting to feel the effects of the strike now. Ashly Burch, lead actress in the game “Life is Strange,” was unable to reprise her role for the franchise’s recently announced prequel. Burch told NewsHour that she believes that other gaming industry workers should unionize.

“This is an amazing industry that is creating engaging and compelling experiences for its players. There’s so much passion and love in the folks that work in this industry. But I think sometimes that passion gets taken advantage of,” Burch said. “And you shouldn’t have to endure unfair or unsafe working conditions to be able to do something you love.”

Scott Witlin, chief negotiator and attorney for the Video Game Companies, said he believes that union leadership should return to the table to protect the interests of their members, who, he said, “have gone nearly nine months without work — while having little to no impact on the video game industry.” He added that companies have been “keenly focused on performer safety” and that the strike is having limited impact on the production of video games.

The impetus for the strike, which is the longest in SAG-AFTRA history, comes down to four main concerns. 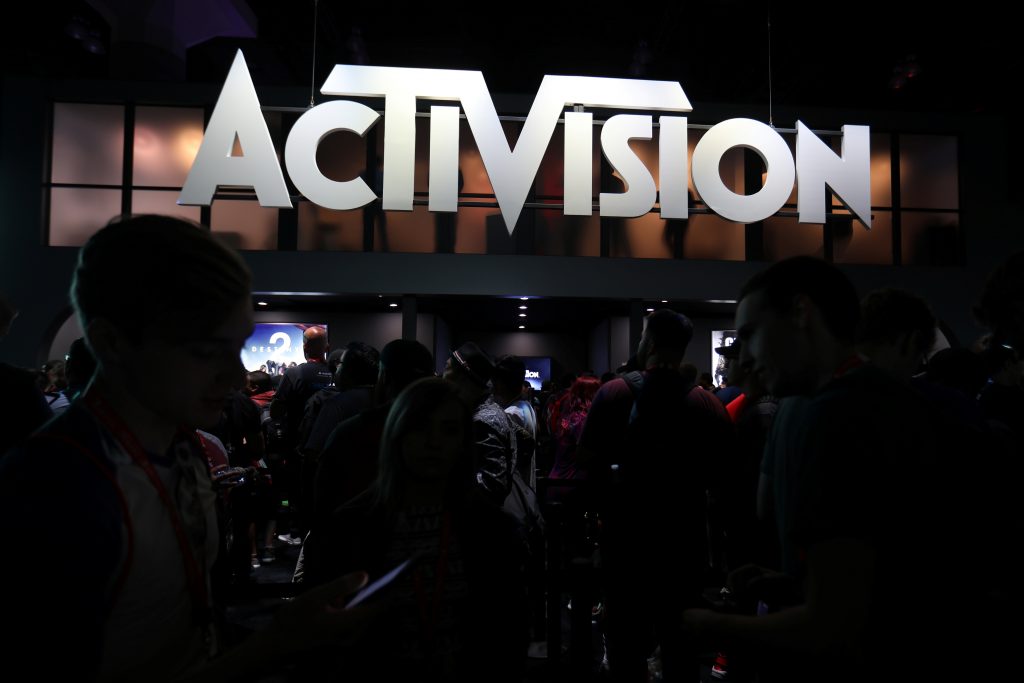 The Activision booth at the E3 2017 Electronic Entertainment Expo in Los Angeles. Activision is one of 11 companies being picketed by SAG-AFTRA since October 2016. Photo by Mike Blake/Reuters

When you play a video game, you may not be thinking about the actor behind the scenes. Each time a character in “Call of Duty” is shot or Johnny Cage loses a “Mortal Kombat” fight, voice actors have to scream for hours just to create five or six different noises. Sometimes, that means game over in real life, too.

“I’ve personally lost my voice for over a week on several occasions, passed out from screaming, even thrown up and bled from the throat. And I’m one of the lucky ones who, thus far, have not sustained permanent damage,” voice actor Steve Blum said in a statement when the strike began. Blum is the most prolific voice actor in the game industry, holding the world record for 261 different roles over his career. He said he knows “many people who have required surgery and been put out of work for months.”

Voice actors hope to limit strenuous sessions to two hours, instead of the four hours they currently endure.

Voice acting is sometimes more than just an actor’s dulcet tones. Several actors fully embody the characters they play using a process called motion capture, which creates a digital representation of an actor’s body. Famous screen actors such as Mads Mikkelsen have performed this kind of work. But with this technology, actors are sometimes expected to recreate the stunts that their characters perform, which can be dangerous.

On film sets, SAG-AFTRA asks that there be a stunt coordinator for all physically dangerous work, including motion capture studios. The picketers would like to have this stunt coordinator rule extended to interactive media.

Voice actors have to be versatile; they can’t get roles by doing the same kind of character over and over again. One day, an actor could be voicing a cartoon kangaroo, the next a grizzled space marine. In the case of some video games, they don’t know which it’s going to be until they get into the sound booth.

This is an issue for some voice actors, not only because actors need details to fully embody their characters, but also because roles can sometimes require suggestive or offensive language of which the actors weren’t informed in their contract.

“Secrecy is important in entertainment. You don’t want your competition to get to market before you do. But once an actor is cast, it’s important that they have as much information about their character as possible,” voice actor Keythe Farley told NewsHour.

When Farley showed up for his first session as Kellogg in Fallout 4, for instance, he signed a non-disclosure agreement and was told this game was going to be a “big deal.”

But “when I asked what the game was, I was told that it was a secret. I walked into the studio where there was a script on a music stand, and we started working,” he said.

The striking voice actors want more transparency. They want to be told exactly what characters they will be voicing as part of their contracts, with no surprise roles or sudden obscenities.

When a movie is released on home video, the actors involved are guaranteed 4.5 percent of the revenue in the first year. But video game actors currently receive no royalties, SAG-AFTRA says. Their payment is based on how much time they spent in the booth, as well as any contracts agreed upon case-by-case. So while games make billions of dollars in revenue, actors don’t see any of it. Michael Hollick, the voice actor for the main character in “Grand Theft Auto 4,” was paid $100,000 for his work making the game before its release, he told The New York Times. The game eventually made more than $1 billion for the company.

The actors want to receive payment equivalent to one-quarter of a session fee, multiplied by the number of sessions worked up to 4 sessions for every 2 million copies of a game sold, up to 8 million sales. In addition, they would like residuals for commercials and other advertising their voice is featured in to be paid at the standard SAG-AFTRA rate.

Witlin maintains that this is a strike that did not have to happen.

“As the performers are now beginning to see, this strike is costing them work, frequently work reprising roles that they previously had performed,” he said.

SAG-AFTRA has independently negotiated contracts with some game studios, but the 11 targeted companies aren’t budging. The union has expressed confidence that there may be an end to the negotiations in the pipeline.

Editor’s note: This story has been updated to include a response from Scott Witlin, chief negotiator and attorney for the Video Game Companies.