Artist Alex Katz not slowing down at 88

At an age when some artists might hang up their paintbrushes for good, Alex Katz is churning out new work.

“I’m really cooking,” Katz told PBS NewsHour in an interview at his Maine summer retreat. “I don’t think I ever painted more than I’m painting in the last year or so.”

“You never know what’s going to happen when you start on a canvas,” he said. “I love the adventure.”

Today, the 88-year-old artist said he still paints seven days a week. When I offered that many people his age might slow down, he had a ready reply: “Well, I ain’t most people,” he said.

Katz’s stature has soared over a six-decade career in which he has outlived many of his early contemporaries, including Jackson Pollack, William De Koenig and Robert Rauschenberg.

This year, his work has been the subject of two museum retrospectives. 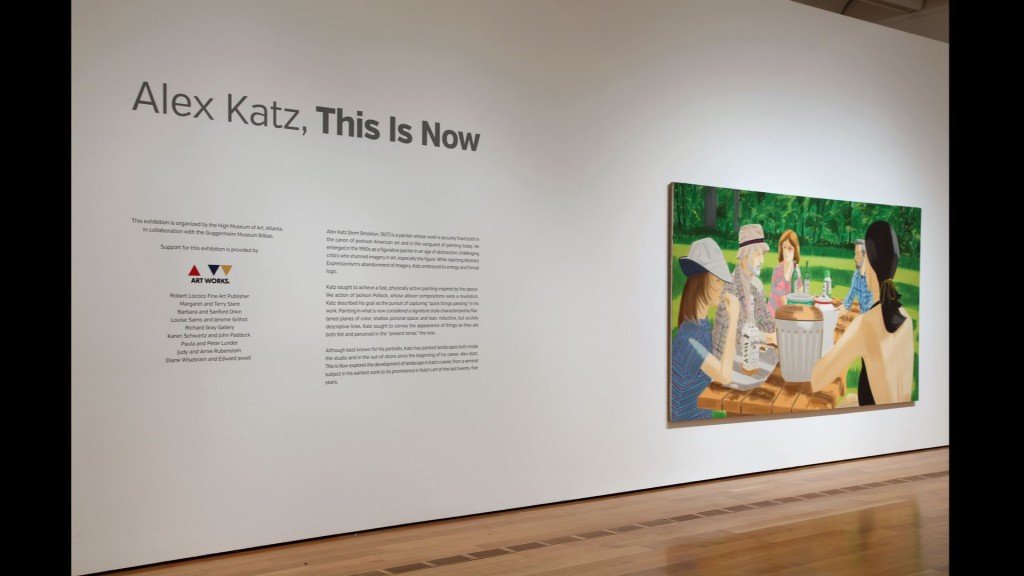 The first, “This Is Now,” at the High Museum in Atlanta displayed 40 of his distinctive portraits and large landscapes — beaming with bright colors, clean lines, monochromatic backgrounds and billboard-sized optimism. The High exhibit closed on Sept. 6 and travels next to the Guggenheim Museum Bilbao in Spain.

The second, “Brand New and Terrific,” at the Colby College Museum of Art in Waterville, Maine, features 69 early Katz works from the 1950s. The Colby exhibit remains on display through November. 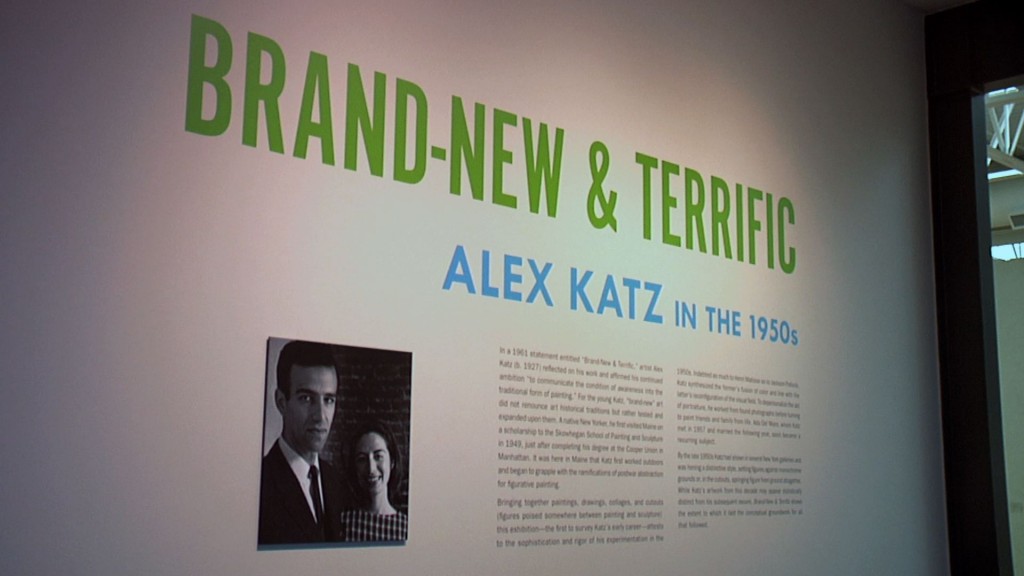 Katz’s work on display at the Colby College Museum of Art in Waterville, Maine. Photo by PBS NewsHour

“He has been one of the most important representational painters,” Colby College Museum of Art curator Diana Tuite said in an interview. “He has really transcended any art movement and continues to really be influential for young painters today.”

Since the 1950s, Katz has straddled two homes – in New York City, where he grew up and still lives nine months of the year, and in the coastal Maine town of Lincolnville, where he has spent his summers since 1954.

A decade ago, Katz built himself a sun-filled studio in the woods overlooking a pond, where he swims daily during the summer. His subject matter can be found outside his windows.

“I like the light,” Katz said. “The further north you get, the less white light you have and the more color, and I thought the color around here, you know, is just really marvelous, and that was a big reason for coming here.”

Katz started coming to Maine in 1949. At the time, he was an undergraduate scholarship student at the prestigious Cooper Union School of Art in Manhattan.

He took summer classes at the Skowhegan School for Painting and Sculpture in Madison, Maine. There he shifted his style from painting from photographs to painting from direct observation.

“I have a lot of training.  I’m not high natural talent,” Katz said.

One thing you learn visiting Katz in his studios is that his paintings are all planned out. When you see a larger painting of his, it has not been improvised. “Everything starts with sketches, studies,” he said.

Katz transforms these small studies into huge canvas paintings faster than one might expect.

When I visited him at his Soho studio in New York, I saw in real time how fast he works — layering wet paint and applying different colors while wielding brushes in both hands.

“You have to really want it, and you have to go for it,” Katz said. 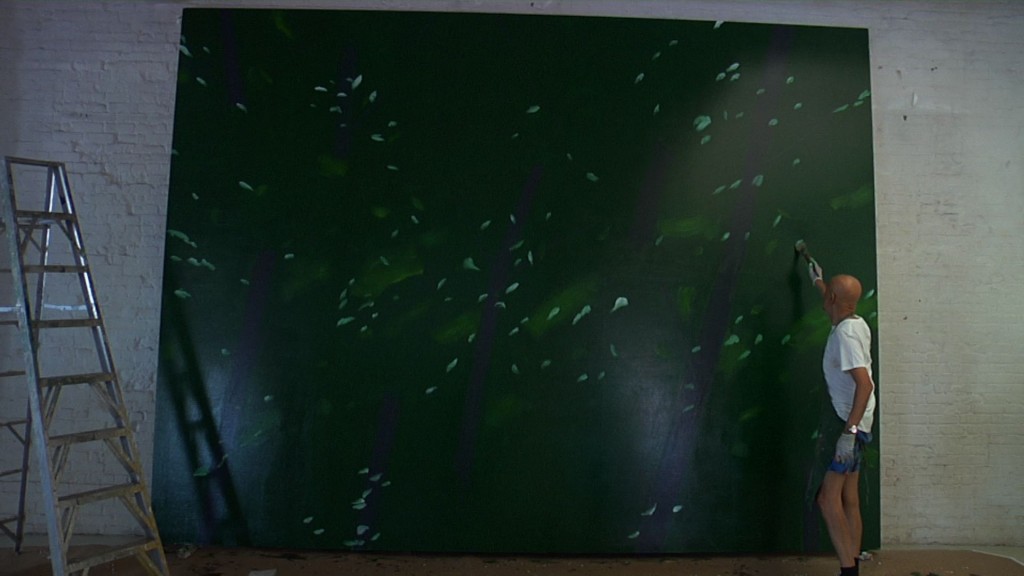 Katz adds a finishing touch to a painting he named “Cross Light 3” in his SoHo studio. Photo by PBS NewsHour

Initially Katz thought he would never be a full-time painter without the financial support of another job.

He spent ten years carving frames for a living while painting and living in apartments without heat. In his first gallery shows, nothing sold, except to a few friends, he said.

“I had five flops in a row,” Katz said with a hearty laugh. But now? “I love sticking it to people who didn’t think I was anything for so many years.”

Given his long summer residency, it’s perhaps no surprise that a Maine museum is the leading repository of his art.

Across the decades, she has appeared in more than 250 paintings. 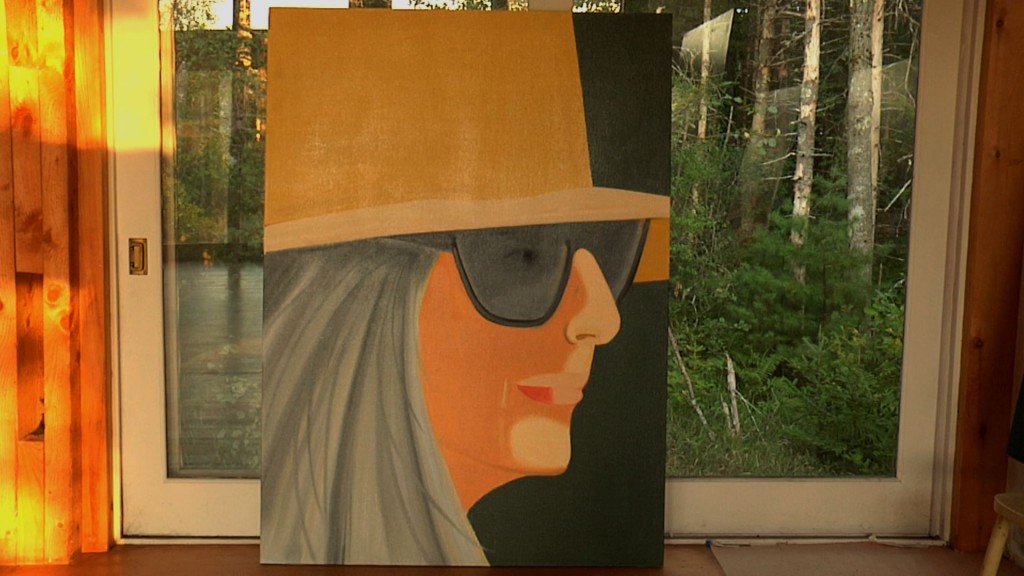 Katz’s latest rendering of his wife Ada, who he has painted more than 250 times. Photo by PBS NewsHour

“Ada’s like a perfect model. Picasso would have jumped at her,” Katz said of the Spanish artist who depicted a series of his own muses.

Katz keeps coming back to the one he married 57 years ago, as he described her, with “Miss America measurements.”

“Ada literally stopped the traffic on Route 1 the first time she came in a bathing suit,” Katz said. “She goes on a beach, guys fall over.”

Today, in his renderings of Ada, the face is still familiar, but the hair has gone gray.

As for Katz, he doesn’t mind getting older. He keeps in shape. He keeps working. He accepts commissions, too — with one small caveat: you must already own two of his pieces and agree to pay double his normal price.

“I feel like I’m 30, 40 years younger than I am,” Katz said. “What’s happening now is that it’s like an explosion of different people are interested in my work than were, like, ten years ago.”

“I think, in a sense, the world caught up with me,” he said.