A man sits at his desk in an empty classroom. Sunlight shines through the bars on the window. He is alone — there is no teacher, no other students and the chalkboard is impeccably clean. Still, the man is taking notes, it seems, and his ankle is shackled with a ball and chain.

This is the scene that Alfred Espinoza wants the world to see. That is, if they were to peek through his window and into his cell in a California state prison.

“Life itself is a learning process,” said Espinoza, in his letter to NewsHour. “We are always learning something regardless of our circumstances in here.”

Espinoza is part of a project that includes incarcerated people from across the country who sent a handwritten and hand drawn postcard to Philadelphia FIGHT, a nonprofit AIDS advocacy organization. Out of approximately 2,500 prisoners across the country who received blank postcards as a part of a larger creative initiative, at least 250 have sent them back with a drawing. 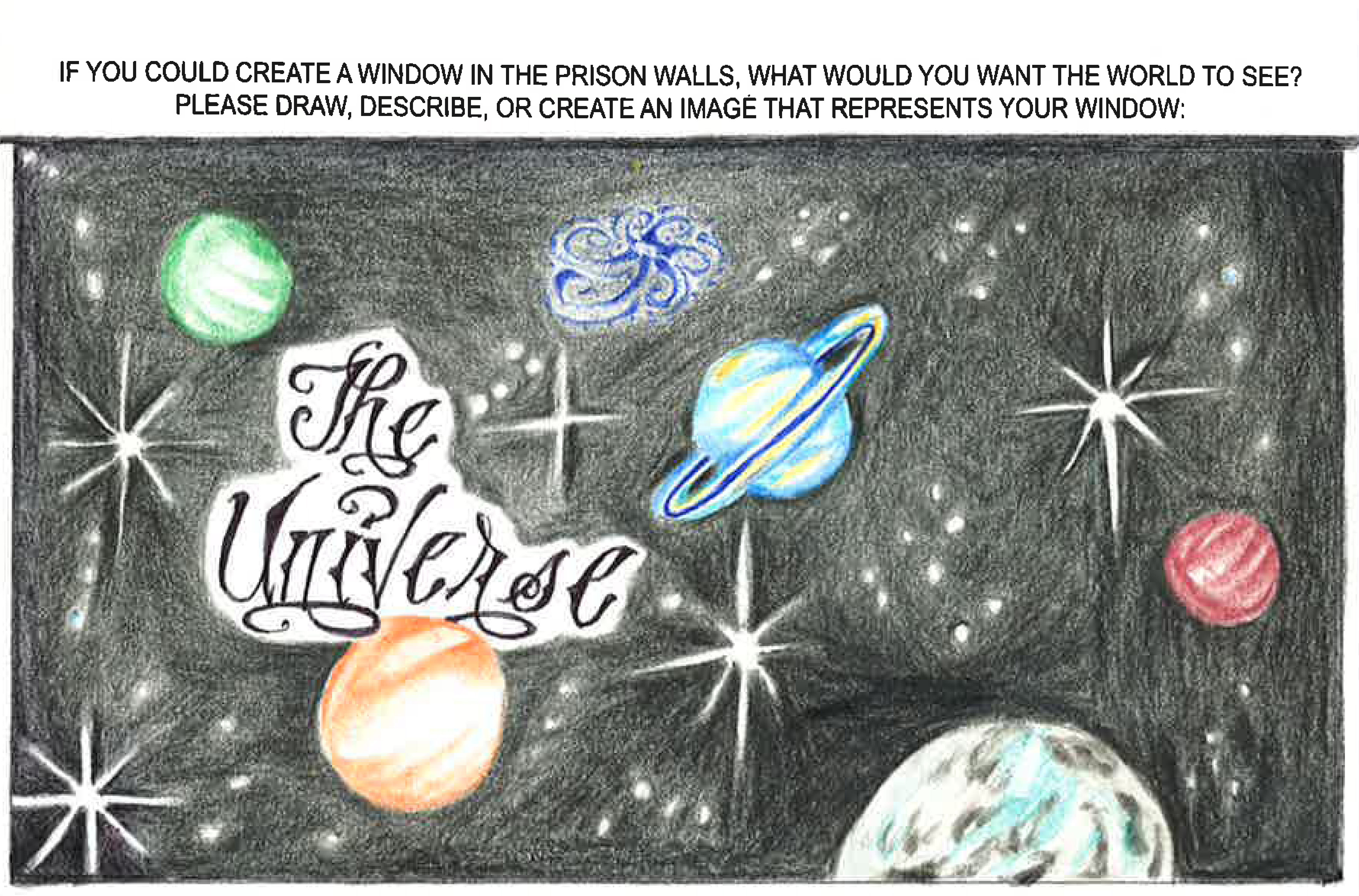 Artist and activist Mark Strandquist came up with this idea of sending blank postcards through Prison Health News, a quarterly newsletter sent to prisons across the country. The newsletters started in spring of 2003 by Philadelphia FIGHT as a way for the service organization to provide medical information, news and personal stories and poems submitted by current and former prisoners for an audience of thousands of people in prison.

“If you could create a window in the prison walls, what would you want the world to see?” says the prompt on the top of every blank postcard that was sent around the country, asking participants to create an image or a message that represents the window into their world.

On the flip side of each postcard is a space where the participant can elaborate on his or her message. 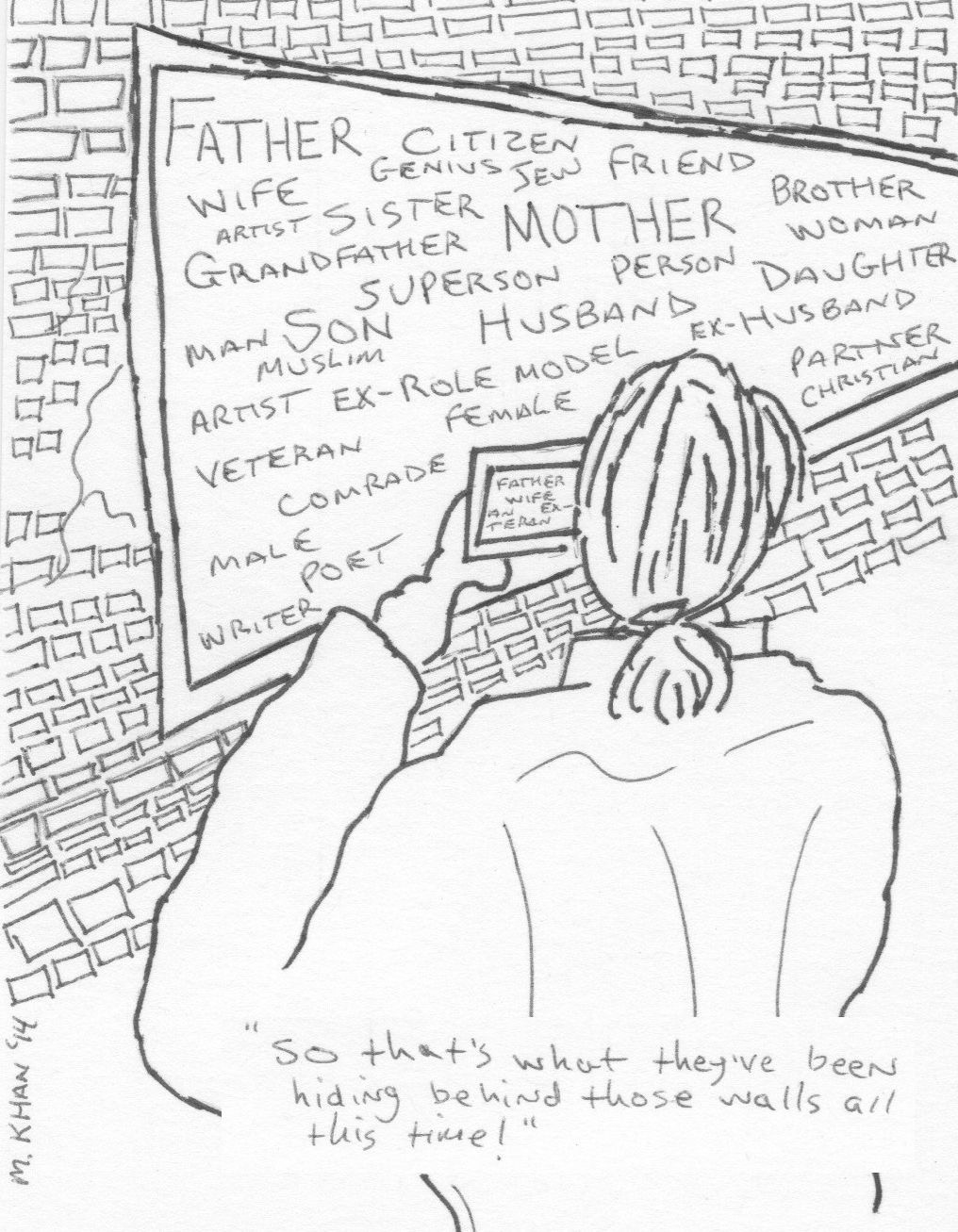 “It’s a complex conversation we’re trying to have in a small area,” said Strandquist, who frequently partners with local activist organizations like Philadelphia FIGHT with a mission to empower people through art and creativity. “It’s amazing that just a tiny flimsy piece of paper could be infused with so much history, ideas, struggles and beautiful reflections on life and love — the piece of paper becomes so incredibly powerful.”

The idea for this project bloomed as an extension of Strandquist’s signature project, “Windows From Prison,” which started back in 2012.

For the original project, the artist posed a similar question to incarcerated individuals from Washington, D.C.: “If you could have a window in your cell, what place from your past would it look out to?”

When people wrote back and described what they would like to see — a favorite place from their childhood or somewhere they remember most vividly — Strandquist went out and took photos of those places with the help of students from Duke Ellington High School and George Mason University. The photos were then printed and mailed back to prisons. 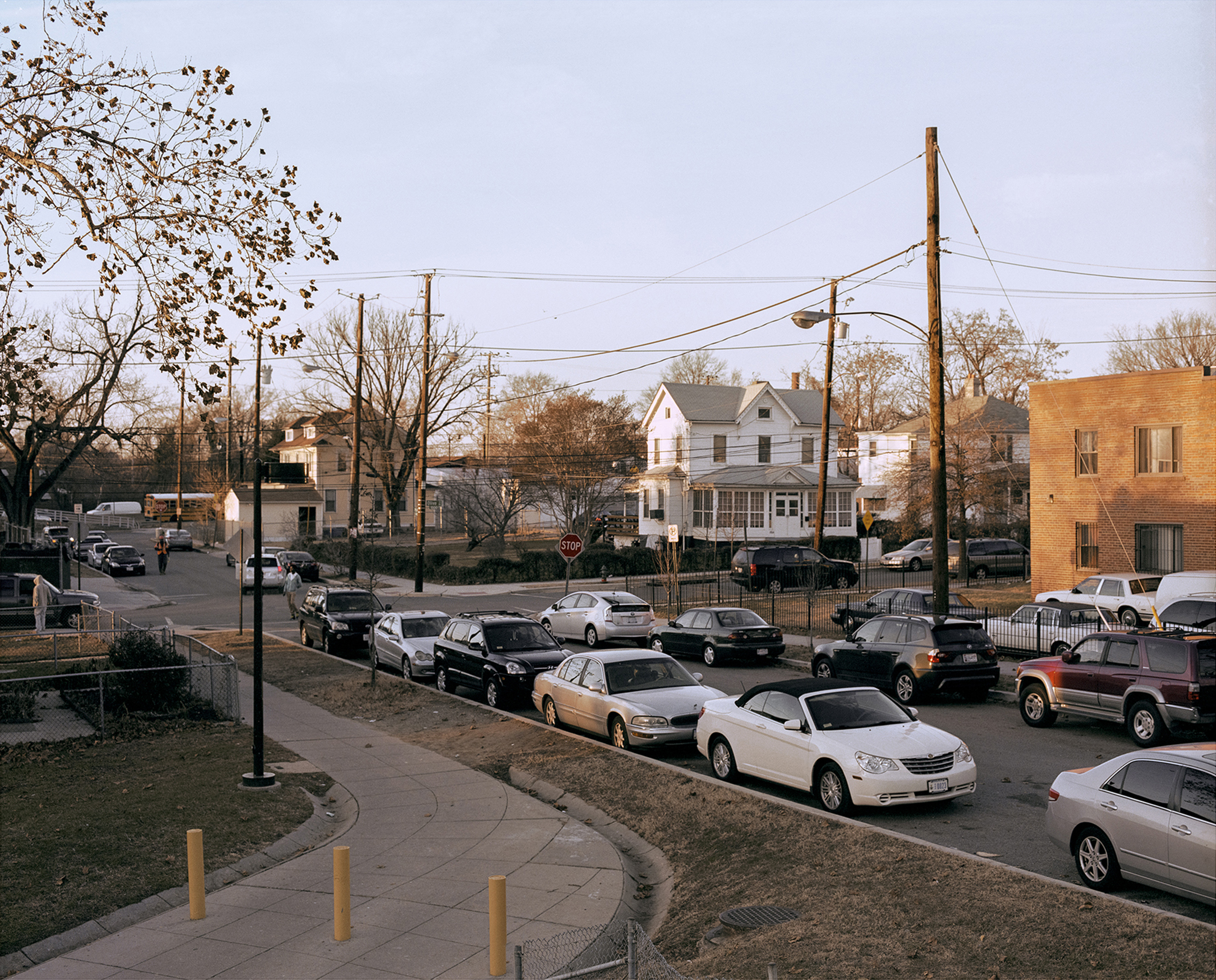 “If I had a window in my cell that could look out to a place in my past it would carry the view of Olive St N.E., off of Kenilworth Ave by Deanwood subway station…This street witnessing every turning point of my life, from graduation and first times, to the police cruising up and down it, repeatedly, because they had warrants for my arrest. Yeh, this place seen it all, and through the thick and thin it always caressed me with its safety and comfort, always worthy enough to call home.” — request letter for “Windows From Prison.” Photo by Mark Strandquist 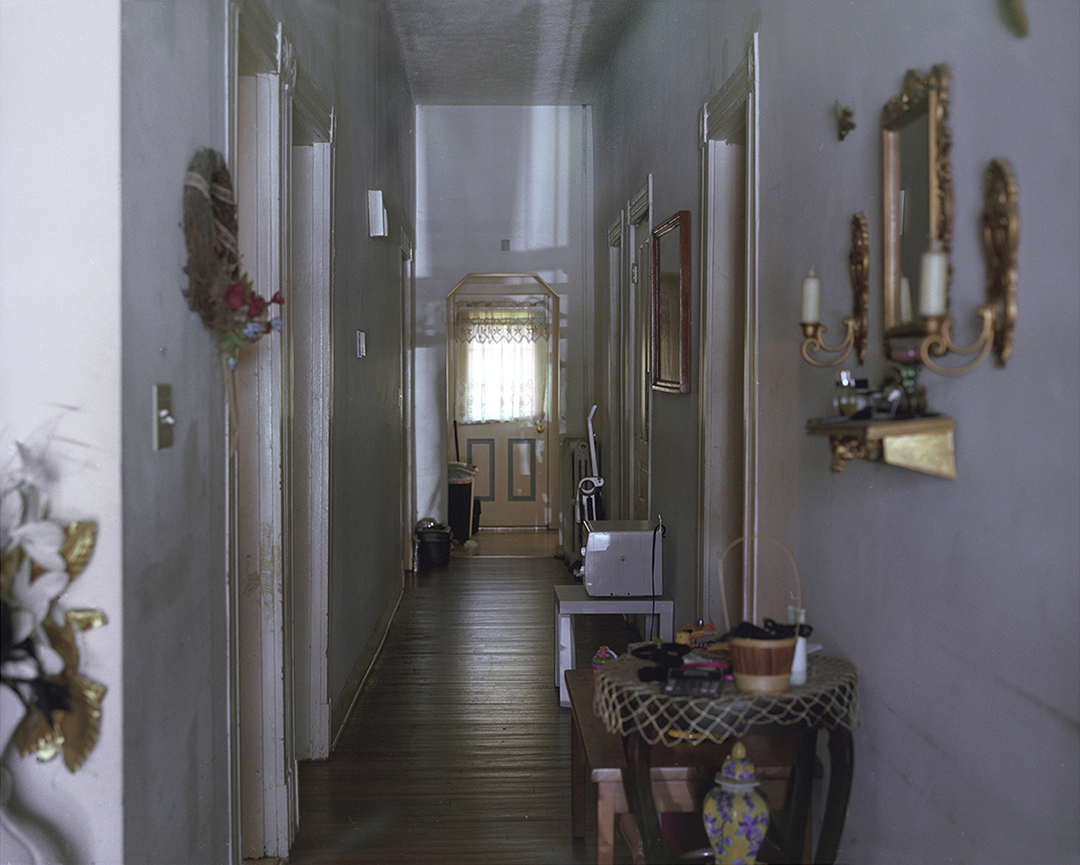 “Looking through this window I can see this long hallway. My sister and I running halfway down the hallway and sliding the remaining of the way in our socks. At the age of 12 and my sister 6, seeing the world through my innocent eyes. This hallway was a safe haven for us. This hallway is filled with much laughter and fun. No worries. I miss this place.” — request letter for “Windows From Prison.” Photo by Mark Strandquist 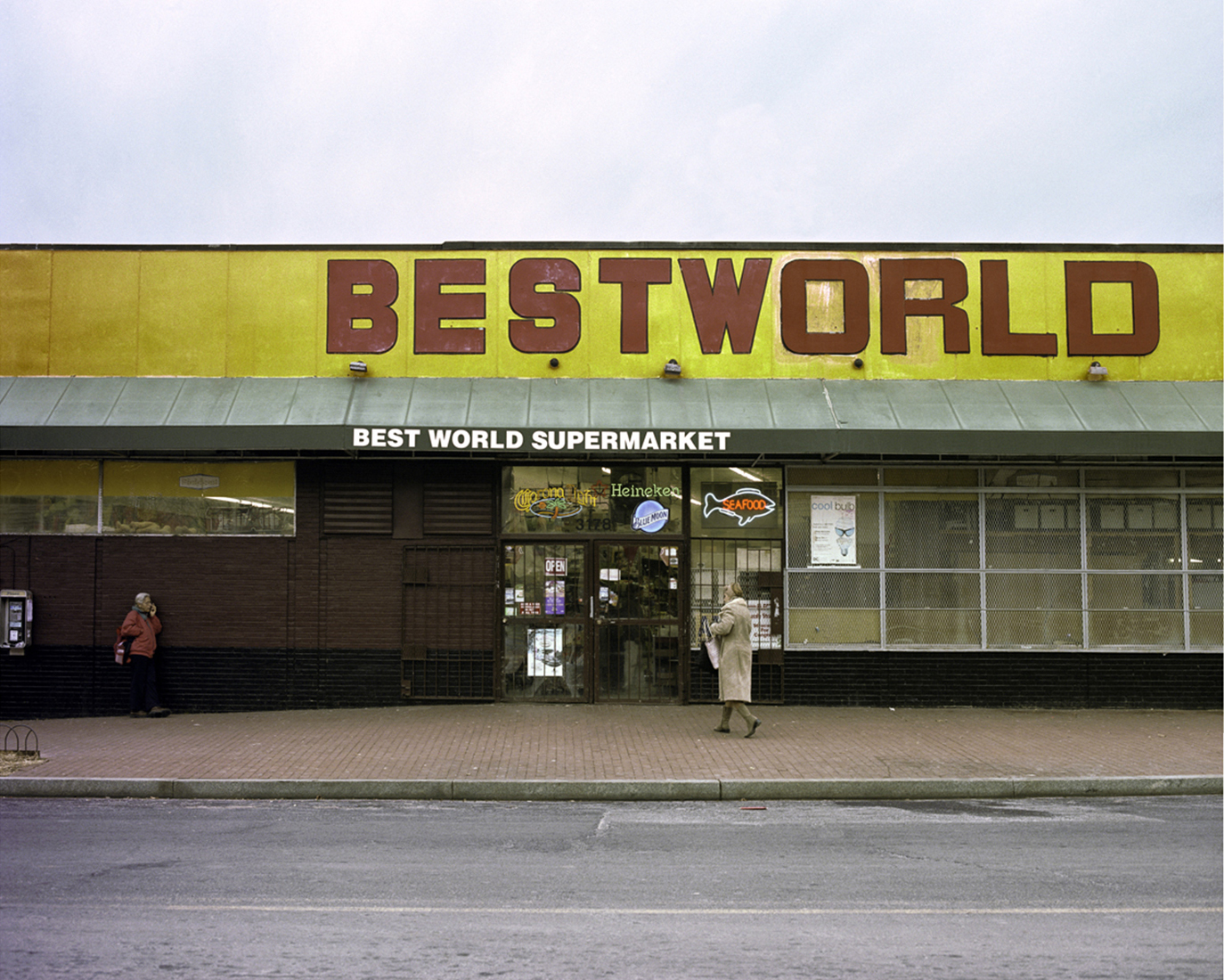 “Lessons are posted all around us…we don’t understand or value them. That is, until we begin to trace our roots. At Bestway I learned to mingle with and learn fro people of all walks of life…From Asian…to Americans…to other Latinos. I learned about struggle and making a living, I finally learned why others appreciate life…Today I say, in a multicultural atmosphere…Bestway supermarket has accomplished its purpose…it has accomplished a vision.” — excerpt from a request letter for “Windows From Prison.” Photo by Mark Strandquist

The artist said it was not an easy task to accurately translate the letters into a form of art. “You have to deeply dig into human essence and meet somebody on a human level.” he said. “Humans are like sponges, so when we work with traumatized individuals, the empathy can come in a profound level.”

Strandquist even involved incarcerated youth in the “Windows From Prison” project. He reached out to Free Minds DC, a nonprofit that uses books, creative writing and peer support to help teenagers who are charged and incarcerated as adults at the DC Jail.

“I was surprised about what a therapeutic impact [the project] had. The actual framing of the question led [the inmates] on this inner journey of introspection, which was powerful,” said Tara Libert, the cofounder and executive director of Free Minds DC.

Strandquist not only used the “Windows From Prison” photos in exhibits and classrooms to encourage open conversations about problems of mass incarceration but also agreed to print the photos in couple of Prison Health News issues, which is when his partnership with Philadelphia FIGHT began. 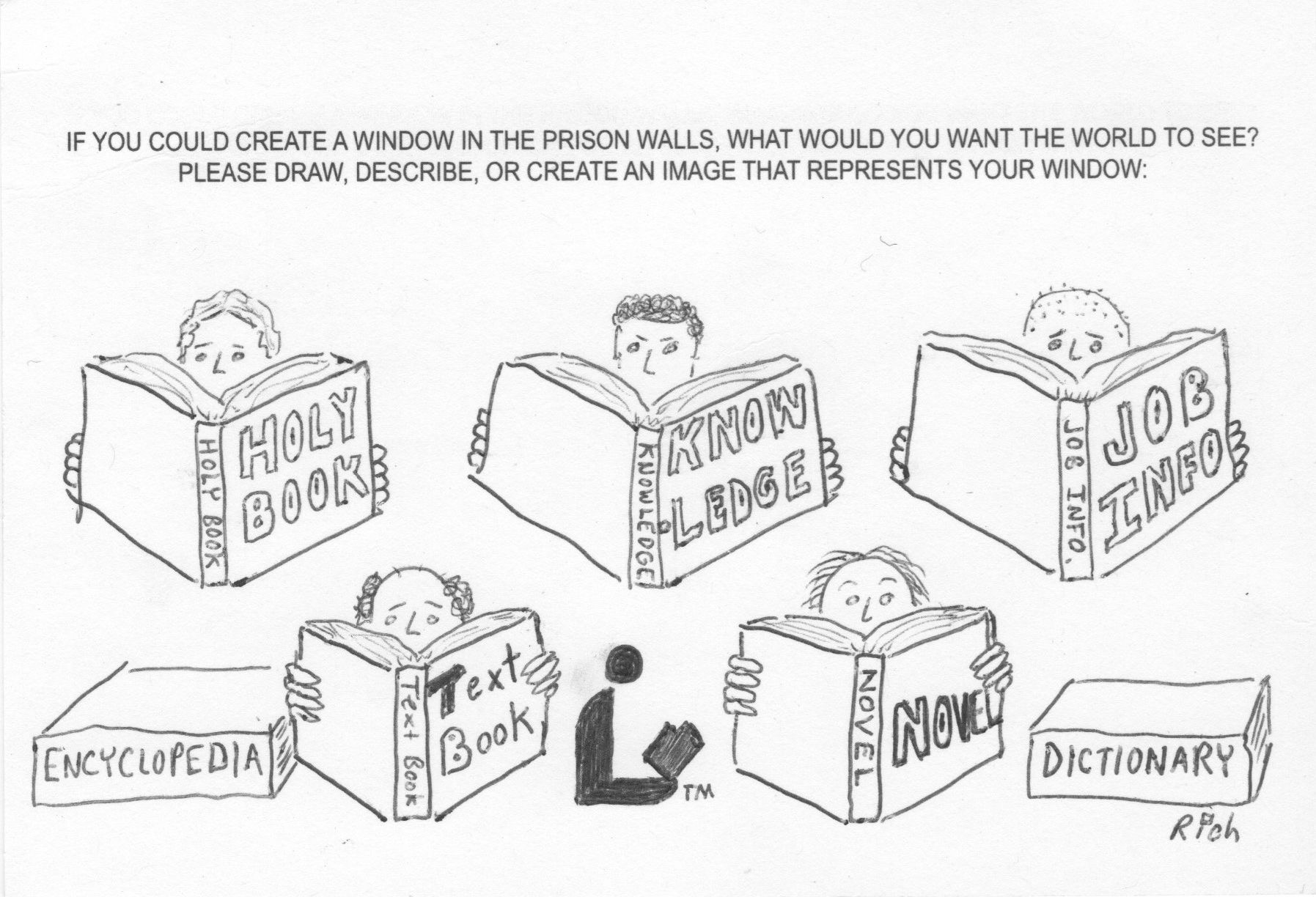 Tomas Benitez, a participant in the postcard project, is one of the subscribers to PHN who was able to enjoy Strandquist’s final product in the magazine.

“It made me see that I am not alone … by seeing and reading other people’s struggles,” Benitez wrote to NewsHour, when asked about his reaction to “Windows From Prison.” 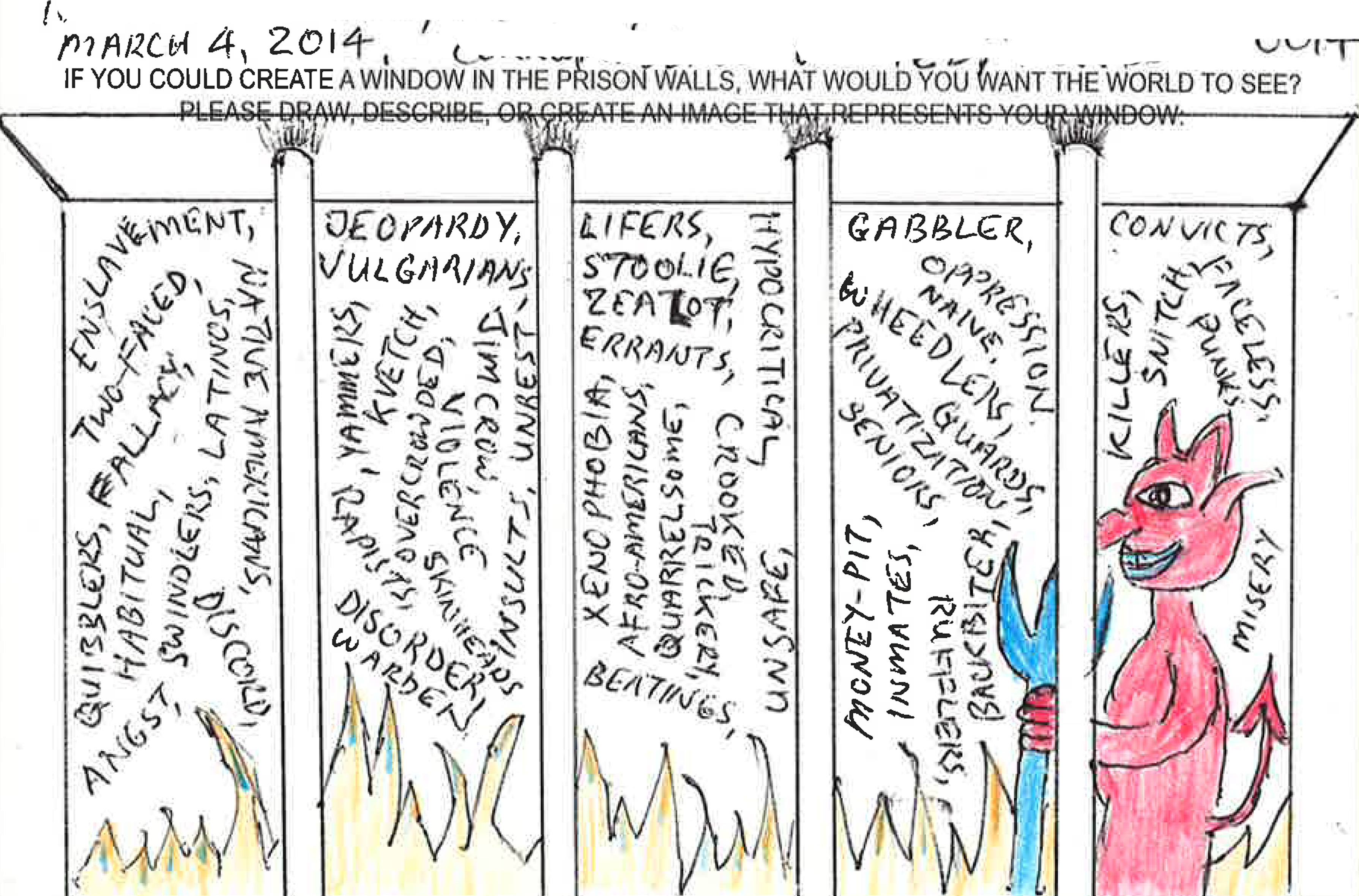 Mark Strandquist and Philadelphia FIGHT staff are hoping that the postcard project would deliver a similar “powerful, truly therapeutic, educational and engaging” experience as it did to participants of Windows from Prison.

“The postcards are heartbreaking, heartwarming, tragic and uplifting.” said Naseem Bazargan, Prison Health News coordinator at Philadelphia FIGHT. “They’re beautiful. Not just in terms of them being aesthetically pleasing but the depth is amazing.” 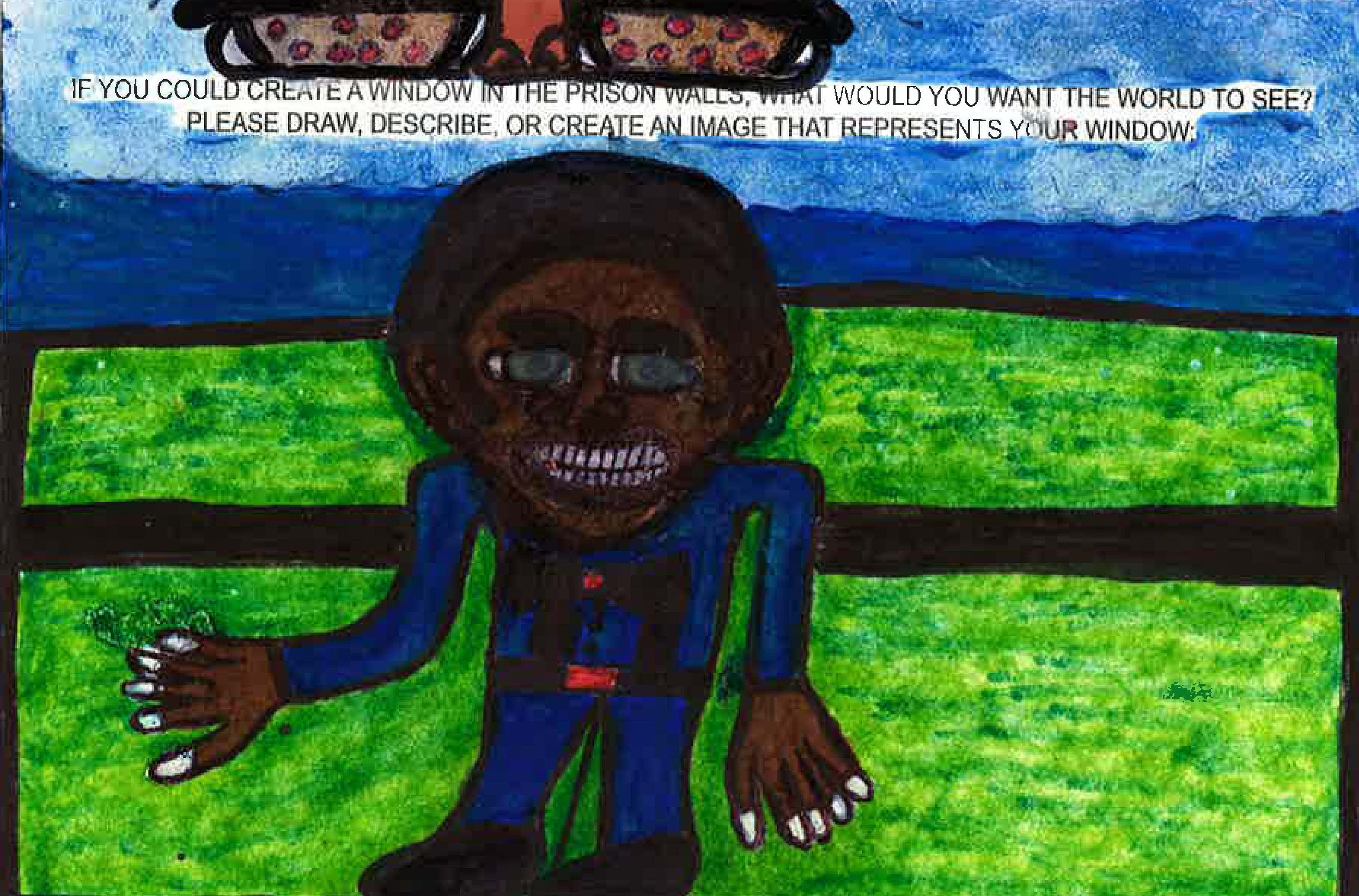 From loneliness and trauma that they deal with every day to critiques of public reception of mass incarceration, many participants have used the postcards to talk about a variety of different subjects and feelings. 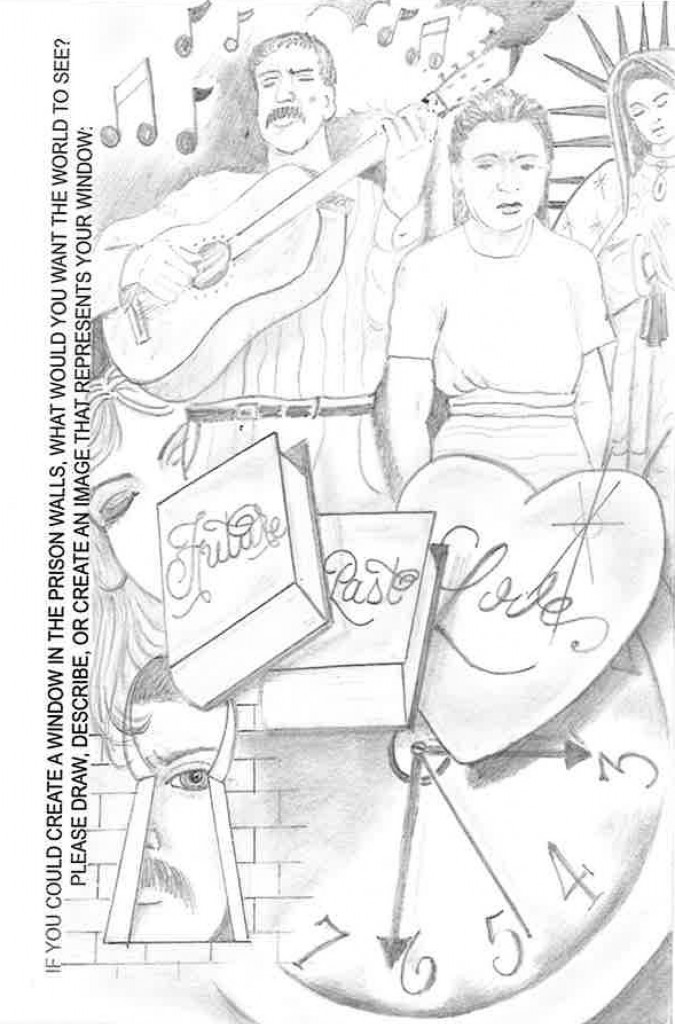 Tomas Benitez wanted to highlight longing and love for his family among other emotions.

“I would like for [people] to see that just because one is in prison it [doesn’t] stop one from being human, have feelings, longings, dreams,” Benitez said in his letter to NewsHour. “We are human — we just arrived in this place for some wrong we committed in society, and some of us do try to change.”

The folks at Philadelphia FIGHT and Strandquist are still working out the details for a possible exhibit of the postcards. They’re trying to figure out how the project fits in with the movement against mass incarceration.

“When dealing with such a sensitive issue and material, it’s important to be fully aware of the real impact of the project and figure out how to best utilize the content without accidentally exploiting people in prison or misinterpreting the messages,” Naseem Bazargan said. 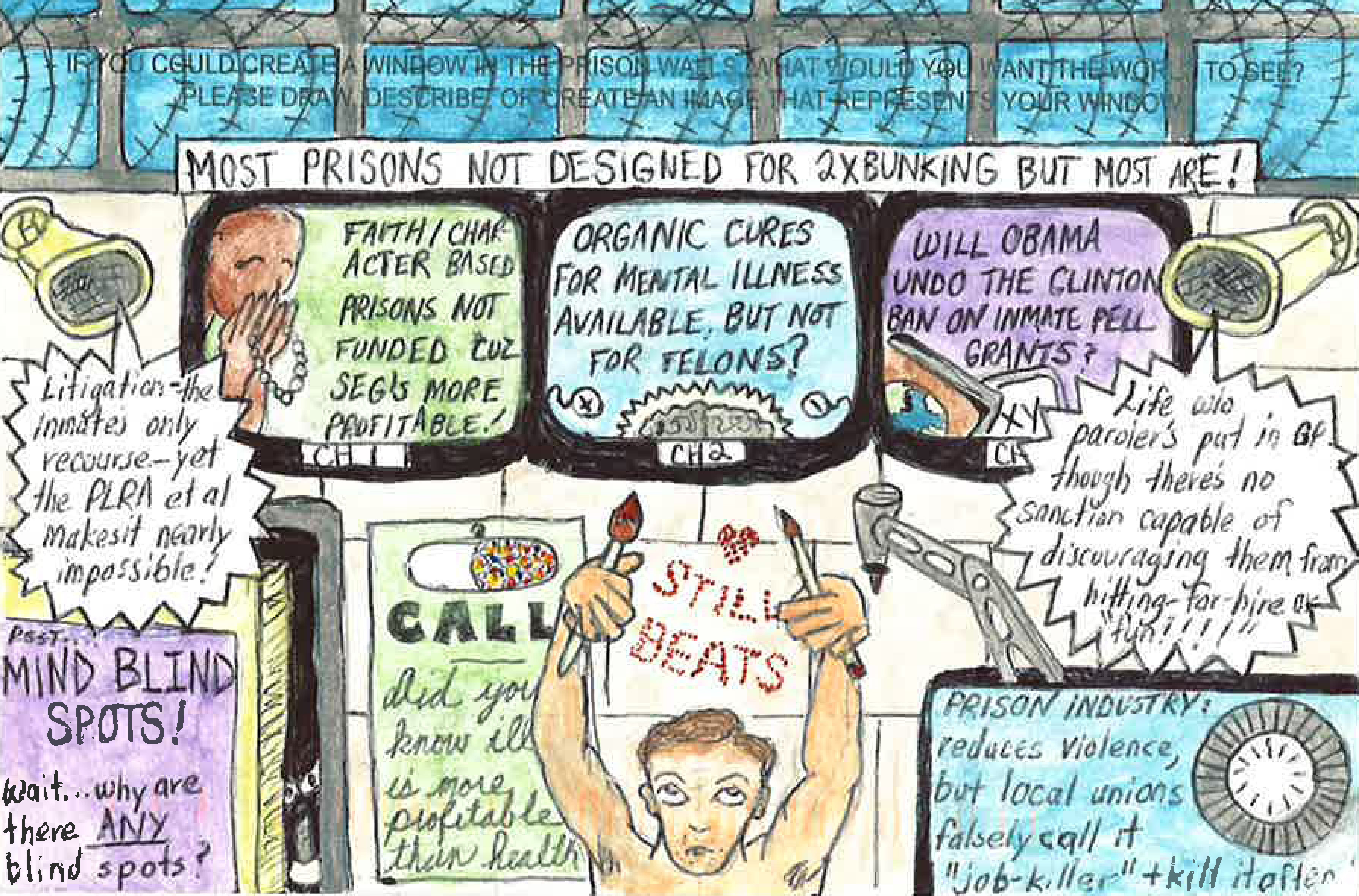 For Mark L. Brown, the postcard wasn’t spacious enough to fit all of his thoughts and observations from inside the cell. But he still wanted to participate.

“I try to be a change agent every day that I am given in the remainder of my existence,” Brown wrote to NewsHour. “Unfortunately, nothing changes if we don’t get the word out there how it is in here.”