Peter Yarrow sings a version of Pete Seeger’s “If I had a Hammer” to help remember the legendary folksinger.

Peter Yarrow, a member of the folksinging trio Peter, Paul and Mary, remembers Pete Seeger as a “beacon of what was possible.” 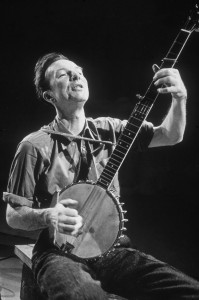 Although his words were simple, Yarrow says he was passionately persistent.

“He refused to answer. He took a stand and never faltered,” Yarrow told chief correspondent Jeffrey Brown on Tuesday. “The struggle was just what he did and he saw himself in those terms, but it wasn’t a sense of arrogance or presumptions. He was the most humble guy you ever met.”

Pete Seeger died on Monday night at the age of 94. His music career, which spanned over 70 years and 100 recorded albums, influenced countless musicians and activists. Peter, Paul and Mary were among them.

“He was our inspiration. His ethic, his whole perspective was that music was there to bring people’s hearts together, really, the basis for doing what we did.”