To everything there is a season: Folk singer and activist Pete Seeger dies at 94

Pete Seeger, the legendary folk musician who helped spearhead the American folk revival, died Monday night in New York City at the age of 94 from natural causes. Across more than seven decades, he inspired scores of singer-songwriters, activists and social movements. Just before his death, he was serenaded in his hospital bed by close friends. 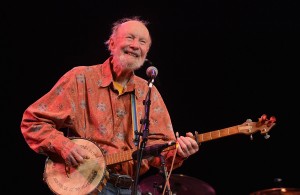 Seeger performs ‘This Land Is Your Land’ as part of the Woody Guthrie Centennial Celebration at The Whitman Theater at Brooklyn College on Sept 22, 2012. Photo by Mike Coppola/WireImage for NARAS

David Amram, a fellow musician and longtime friend of Seeger, was among the group who sang to him. “I was fortunate enough to be able to say goodbye to him during the last two hours of his life. As [we] played some music for him and his family in his hospital room, we could feel his spirit fill our hearts with that endless energy he shared with the world for 94 years,” wrote Amram in an email to friends and family in Seeger’s honor.

“Ever since he chose his path, he has stayed on it and walked the walk he talked and inspired generations to raise our voices in song, to always think of others, to respect ourselves and all who cross our paths and to share whatever blessings we have with others.”

Listen to a 1941 recording of Pete Seeger performing with Lee Hayes. They both went on to be members of The Weavers, a quartet that was part of the New York City’s Greenwich Village folk scene.

Many of Seeger’s songs became trademarks of the various social movements that kindled his passion and fight. “Where Have All the Flowers Gone,” one of his best known songs became a regular anthem in the anti-war movement in the 1960s and ’70s. “We Shall Overcome,” an early gospel song adapted by Seeger from “We Will Overcome,” was a rallying cry during the civil rights movement in the 1960s.

Watch Pete Seeger perform “Where Have All the Flowers Gone.”

“Pete used his voice — and his hammer — to strike blows for worker’s rights and civil rights; world peace and environmental conservation. And he always invited us to sing along,” President Obama wrote in a statement released by the White House. 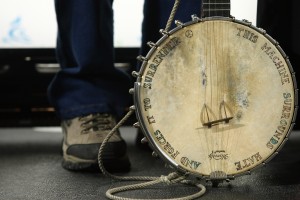 Pete Seeger’s banjo is famously inscribed with the words “This machine surrounds hate and forces it to surrender.” Photo by Neilson Barnard/Getty Images

Over the course of 100 recorded albums, Seeger influenced an extensive and impressive list of artists. Bob Dylan, Joan Baez, Bryce Springsteen, Peter Yarrow of Peter, Paul and Mary, and Bernice Johnson Reagon of Sweet Honey in the Rock, just to name of few.

Arlo Guthrie was also inspired by Seeger and played with him many times. Guthrie’s father, Woodie Guthrie, was a close friend of Seeger’s and the duo performed together on occasion before they were both blacklisted as communists.

“I usually do a little meditation and prayer every night before I go to sleep – Just part of the routine. Last night, I decided to go visit Pete Seeger for a while, just to spend a little time together, it was around 9 PM. So I was sitting in my home in Florida, having a lovely chat with Pete, who was in a hospital in New York City. That’s the great thing about thoughts and prayers- You can go or be anywhere. I simply wanted him to know that I loved him dearly, like a father in some ways, a mentor in others and just as a dear friend a lot of the time.”

Watch clips of Pete Seeger performing, plus interviews with the musician and others at American Masters.