At the top of the instrument’s long neck, he fit tuners into the black walnut, cut down from a nearby forest. After six weeks of work, achieving his goal of finishing his instrument excited Smith, a 38-year-old former coal miner from Littcarr, Kentucky, roughly 10 miles south of where he now sat and worked. His mark was on it — his initials cut into the body’s design.

How did Smith become a budding luthier? The Knott County Drug Court allowed him to enroll in classes through the Culture of Recovery program at the Appalachian Artisan Center. Smith decided to learn carpentry, joining six other students who together would build musical instruments at the center in Hindman.

“I couldn’t wait, but I was nervous, too,” Smith said.

Generations of families have passed down these art forms, but for years, that tradition has dwindled. So has the economy.

Smith dipped a blue rag in linseed oil and polished his dulcimer. “It’s that last finish that makes it shine.”

Around him, benches were cluttered with projects in progress. Scroll and band saws stood nearby. Body molds for guitars, banjos and mandolins hung along the walls. Rough cuts of black locust and red spruce were stacked like firewood along the wall, waiting to be transformed.

Master craftspeople teach Appalachian art, such as luthiery, blacksmithing and ceramics, through the Culture of Recovery program, which was launched in January with a two-year grant of $475,000, which is part of $8.7 million given by ArtPlace’s National Creative Placemaking Fund. Students from the drug court study their crafts on Tuesdays, and patients at Hickory Hill, a nearby drug rehabilitation center, get lessons on Wednesdays. 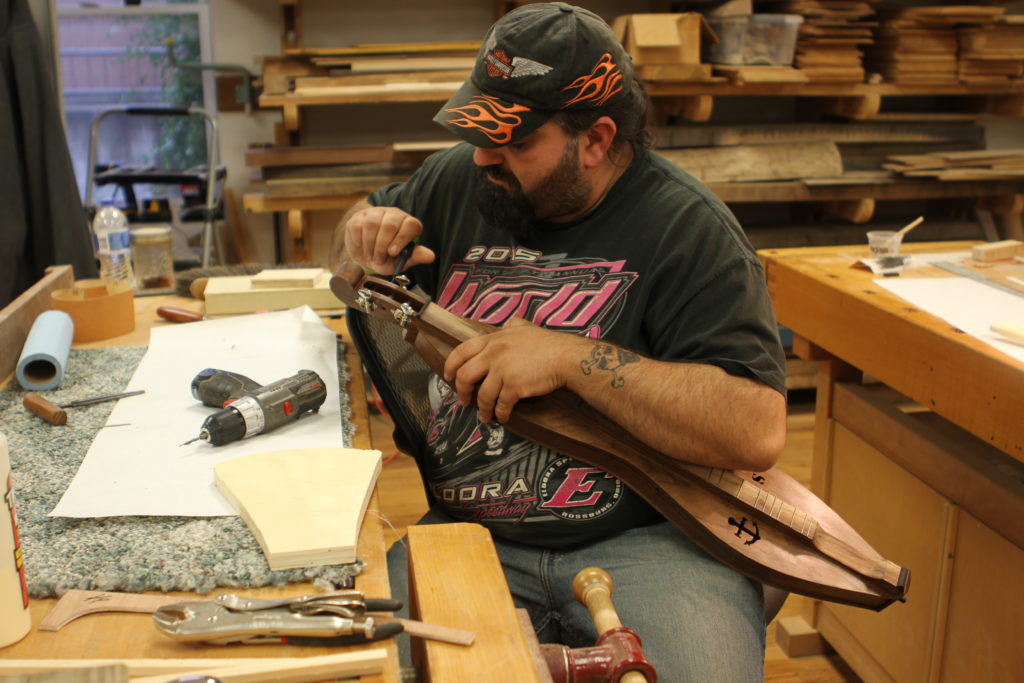 Nathan Smith, a 38-year-old former coal miner from Littcarr, Kentucky, works on a black walnut mountain dulcimer at the Culture of Recovery program at the Appalachian Artisan Center. Photo by Laura Santhanam

Generations of Appalachian families have passed down many of these art forms, but for years, that tradition has dwindled, said Doug Naselroad, a master luthier who teaches at the center.

So has the economy. Coal jobs that once fueled the local economy have been exhausted, and now, the jobless rate sits at 6.4 percent — double what’s seen nationwide.

After coal’s downturn, Oxycontin flooded into the area, Naselroad said. Knott County was identified as a drug overdose hotspot in a June report from the Kentucky Injury Prevention and Research Center and Kentucky Public Health. At night, Hindman shut down, and during the day, Naselroad said “there was nothing here that someone would want to come downtown for unless they had a court date.”

The mountain dulcimer that many of Naselroad’s students make was first developed there in Knott County in the 1870s, he said. For four years, he has commuted 100 miles each week from Winchester, Kentucky, to teach at the artisan center; it is so important to him to preserve regional arts and culture. But he also thought the practice of making and playing these instruments could soothe people in recovery from addiction. In reclaiming that tradition, they are breathing new life into both music and art forged in the mountains.

Hindman is a small town with 777 residents, and surrounding Knott County has seen tough times in recent years.

The average weekly wage is less than $600, nearly half of the national average and among the lowest in Kentucky, according to data from the Bureau of Labor Statistics. And Medicaid provides health coverage for roughly a fifth of all adults.

For more than 10 years, Smith worked the third shift in a coal mine 25 miles south in Letcher County. He ran a bolt machine and served as a bull crew member, cleaning machinery overnight so it would be ready for the first shift to use.

“It’s a whole different lifestyle under the mountain,” he laughed.

But then the jobs went away. Smith paid bills by doing lawn work and said he developed health problems.

In August 2017, Smith was arrested on drug-trafficking charges, landing before the Knott County Drug Court last December. He said he wanted to turn his life around.

After six months in the drug court program, Smith said he was able to enroll in June classes with the artisan center. He loved music and had played guitar for more than four years.

“This had always been a passion of mine, and it would help keep my life on the right path.”

“This had always been a passion of mine, and it would help keep my life on the right path,” Smith said.

When designing the program, Jessica Evans, executive director for the Appalachian Artisan Center, said she and Naselroad asked, what were community’s greatest needs and how could art serve them? Those questions helped them forge Culture of Recovery.

Students from the nearby drug court make their way to class to work on projects throughout the week, said Evans. “Our studios have become a safe place for them.”

Whether students are learning how to make knives or build a backpack guitar, the arts tend to deliver a soothing, beneficial effect. Evans said one student in her ceramics class had overdosed on opioids so many times that he developed motor skill issues. He couldn’t control the pressure he applied to an item — if he held a styrofoam coffee cup, he might unintentionally crush it in his hand. But when he worked with clay to spin a pot, he told Evans it felt therapeutic. He could see his fingers shape his pottery, and worked to control his touch at the wheel.

In the luthiery class, apprentice Kris Patrick also works with students who come through the workshop, including those who participate in the Culture of Recovery program. He is learning from Naselroad through a yearlong folk and traditional arts grant from the Kentucky Arts Council. For his apprenticeship, Patrick, 30, from Mousie, Kentucky, sanded down black walnut to produce a master-level guitar with abalone details. On Tuesdays and Wednesdays, he helps the students who come through Culture of Recovery. After watching a good high school friend struggle with substance use disorder, Patrick said he has “got a heart for these guys that come in here.”

When he first worked with the students, Patrick said he cut out all the needed wooden pieces so they could put their ukuleles together like a puzzle. Several of them had never touched a band saw or stepped inside a workshop. He later felt he robbed those students of a chance to mature as carpenters, something they could carry with them to a new job.

“We want them to have a new instrument, but most of all, we want them to learn a new skill,” Patrick said. Now, he lets the students do it on their own.

With Smith’s frets in place, Naselroad showed him how to set the silver-plated steel strings that would give the new dulcimer its voice. In the holler where he grew up, Smith said he knew only one person who played dulcimer — a friend’s grandfather.

Being at his bench kept Smith’s hands busy and his life out of trouble.

With two of his strings strung, Smith couldn’t wait long enough to place the third. He eagerly plucked his dulcimer, and smiled.

“It feels pretty good,” he said, grinning. “I never imagined making anything like this.”

His next project would be a door harp cut out of black walnut, and at some point, Smith said he wants to make a backpack guitar.

He keeps coming to luthiery classes three days a week. Naselroad joked that the workshop was Smith’s home away from home, and Smith agreed with a smile. Being at his bench kept Smith’s hands busy and his life out of trouble.

“We’re not therapists — we’re just craftspeople,” Naselroad said. But he understands the workshop helps to keep two things alive — the region’s arts and culture and residents’ ability to recover from addiction.