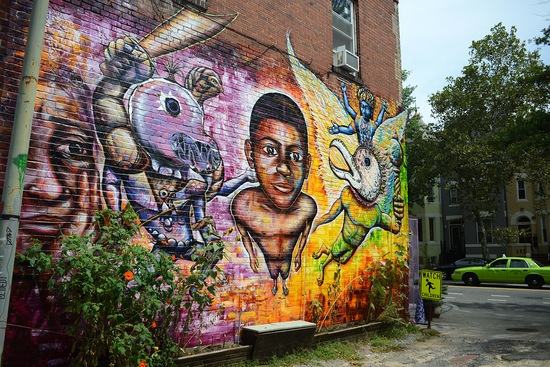 Pedestrians in the Columbia Heights neighborhood of Washington D.C. may not spot this mural, but using the app they would know where to find it. Mural created by Joel Bergner and photo by Ariel Min/PBS NewsHour.

WASHINGTON — Tucked in an alley on a cafe-lined street, a young child is flanked by a 10-foot-tall blue-skinned Vishnu and a purple shaman. The trio is frozen in spray paint and glass, a colorful art experiment on the side of a two-story building. They are hidden from view for the most part; you might catch their gaze if you wandered behind the Wonderland Bar after a few beers. But you can also find them on ArtAround, an app that gives art lovers new tools to help them discover and engage with public art.

ArtAround helps users find, map and share the “art around” them. The app’s Executive Director Anna Bloom was inspired by walking her city’s streets. “I think the idea behind the app was to … make those experiences, those deeper connections with art — and by extension, place, history and culture — more ordinary. To make them a part of everyday life.” 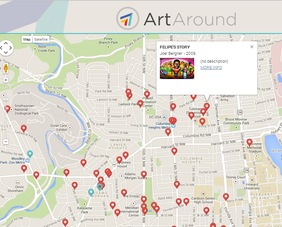 Users add their finds to the app’s map so each artwork marked.

It’s a community-generated map, tagged with the locations of publically accessible art, including murals, sculptures and, yes, even graffiti. It already features hundreds of pieces of public art in Washington, San Francisco, New York, Oakland, Calif., and it’s growing — a street in Spokane, Wash., already features seven tags. Anyone can photograph the artwork, then upload its location and information to the ArtAround app. Fellow followers are able to explore the map, comment on particular artwork and update information on the piece to include its name, creator and description.

The concept itself isn’t really new. The Boston Art Commission has an interactive map of city-approved public artwork and an app called STQRY , which maps public attractions and features multimedia content. What separates ArtAround, and what makes it an interesting take on public art, is the community that it both relies on and creates.

The app, by its very nature, empowers people to explore their local surroundings. The map tools are designed to make it easy for users to plan outings ahead of time, letting them search for interesting artwork. Its founder, Laurenellen McCann has given art tours that used the app as a jumping off point. Other users have been known to create geocaching scavenger hunts.

But perhaps the feature ArtAround users most enjoy is the new-found sense of awareness of the public art. Kevin Gough, a programmer in San Francisco, used the app to explore his neighborhood. “The power of the app is that it … gets you into the community, and lets you interact with the art around you, and perhaps the people who are also viewing the art.”

McCann likens it to bringing a museum onto the street. When the developer and artist lived in Washington, she frequently would pass by a huge mural of Marilyn Monroe’s eyes, not knowing the story behind it. Using ArtAround, she learned that the mural was a birthday present commissioned by two guys in the neighborhood. “It was a really fabulous discovery for something that in a Gatsby-esque way lorded over my time in D.C. That’s the experience that I think that these art-mapping apps have. The potential to give meaning and help us take note that the response (to public art) is important and special.” 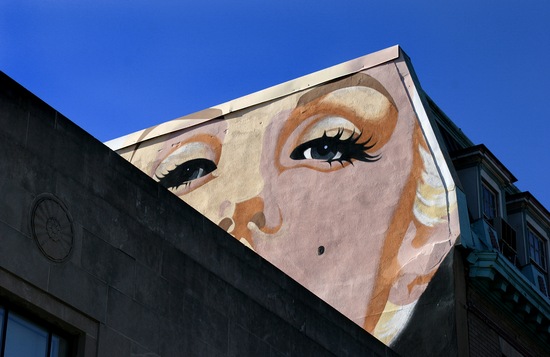 ArtAround also allow users to engage in a way they wouldn’t be able to in a museum: users can comment on an artwork and engage in dialogue. In the comments, users express their opinion on the piece or let people know if the work is damaged or fading. Sometimes the artist even joins in the discussion.

ArtAround is still growing. It was founded in 2010 with help from the D.C. Commission on the Arts and Humanities, and has steadily expanded its presence in San Francisco and New York. As more art and information is being added to those cities’ maps, the staff — all eight of them — is focused on doing more to create community, organizing mapping events and keeping a social media presence. Bloom wants to see it expand to more cities. The potential to change the way people view the art and the space that surrounds them, she says, is “wild.”

As a user, Gough finds something new every time he uses ArtAround. “It feels like an adventure, like an urban spelunking expedition. It doesn’t feel dangerous. … It feels freeing.”