Painter captures the data of climate change in 7 stunning watercolors

Most paintings don’t come with an x- and y-axis. But for Jill Pelto, art is all about the numbers.

The artist, who graduated in December from the University of Maine with a degree in earth science and studio art, creates paintings based on graphs of data on the environmental effects of climate change. 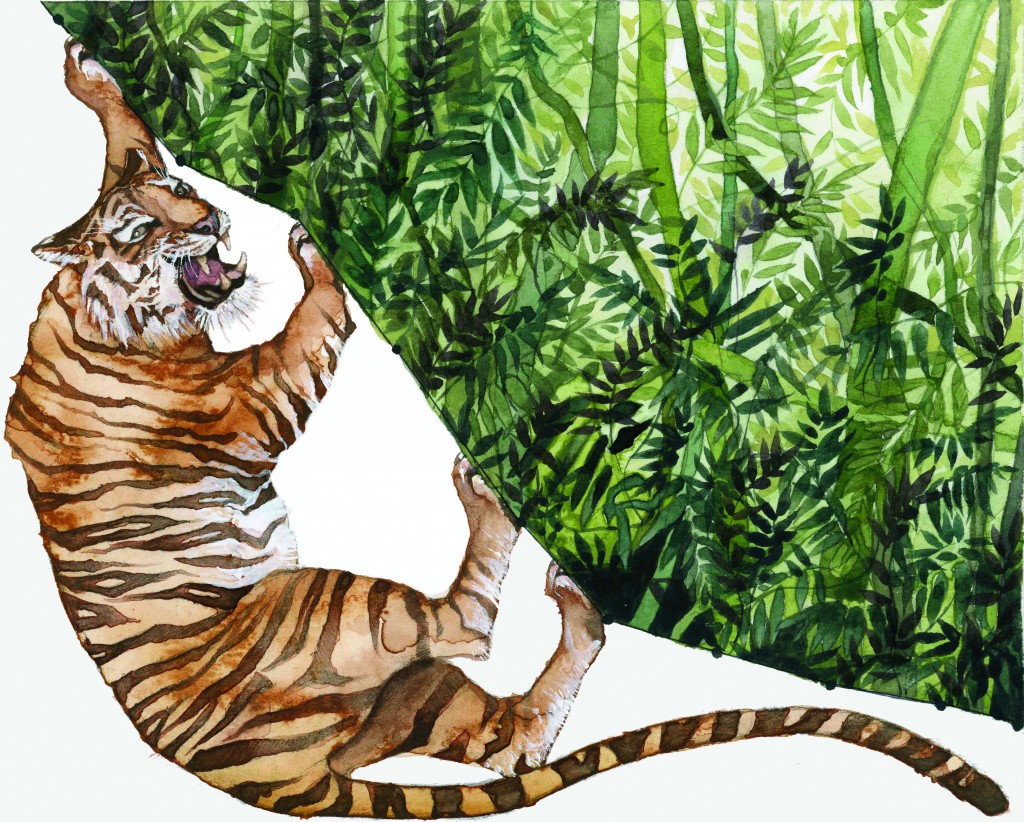 “Habitat Degradation: Deforestation” uses data showing the decline in rainforest area from 1970 to 2010. These lush ecosystems are disappearing before our eyes, and with them, millions of beautiful species. For this series, I chose to separate the animals from their habitat, because that is ultimately what we are doing. The tiger is trapped outside the forest, cornered. Art and caption by Jill Pelto

Pelto’s paintings are based on several different data sets that measure glacial melt, animal populations and forest fires, among others. Each set focuses on the ways that climate change has affected these aspects of the environment.

Seven years ago, Pelto began assisting on a project led by her father, glacial researcher Mauri Pelto, to measure the health of the glaciers in Washington’s North Cascade National Park. The project, which measures snow depth across a wide area to determine to what extent the glaciers there recede each year, has been ongoing for 31 years. 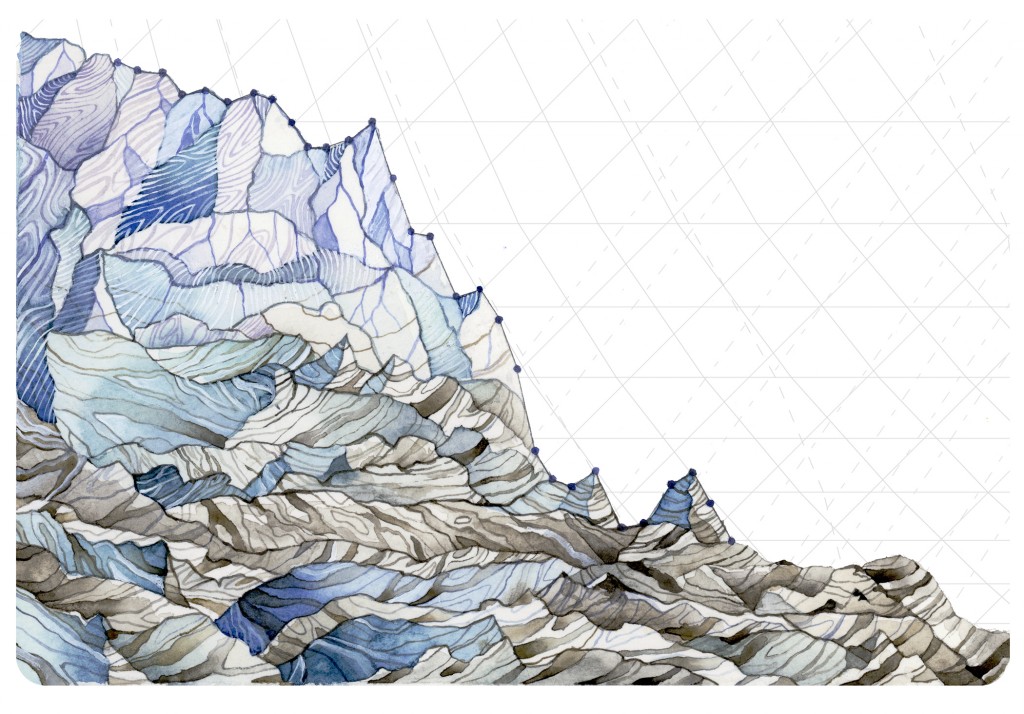 “Decrease in Glacier Mass Balance” uses measurements from 1980-2014 of the average mass balance for a group of glaciers in North Cascade, Washington. Mass balance is the annual budget for the glaciers: total snow accumulation minus total snow ablation. Not only are mass balances consistently negative, they are also continually decreasing. Art and caption by Jill Pelto

In a 2008 paper, the researchers wrote that in the previous 23 years, the North Cascade glaciers had lost 20 to 40 percent of their total volume. The paper called the glaciers’ retreat “ubiquitous, rapid and increasing.” Washington relies on glacial melt for drinking water, agriculture and hydropower, according to the state’s Department of Ecology, but as the glaciers decline, that melt will eventually slow down, depleting the area’s water source.

Pelto hopes that her pieces can work as a visual link to the data, grabbing the attention of people for whom those numbers aren’t enough. “As someone who’s interested in science, I’m intrigued by a graph in an article,” she said. “But I know the majority of people aren’t. They’re going to just skim over a graph. … I think a much bigger percentage of people are attracted to the visuals of art.” 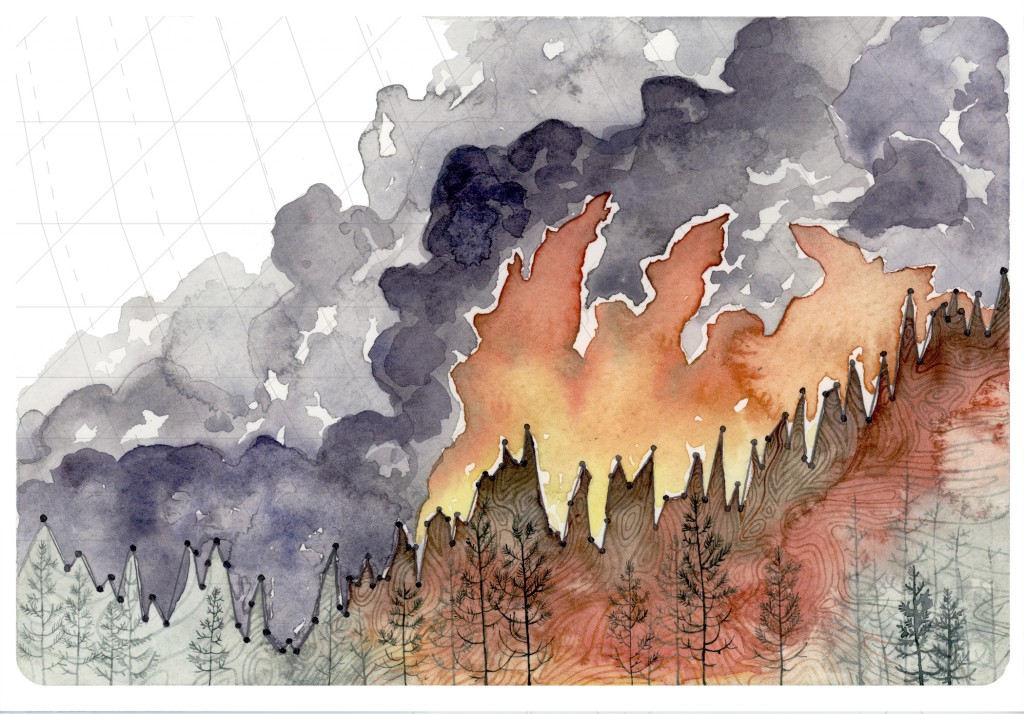 “Increasing Forest Fire Activity” uses global temperature rise information from Climate Central. Fortunately, I was not near any of the massive forest fires that raged before, during, and after my two weeks in Washington this summer, but I was greeted with many smoke-filled days. On some days, when the winds blew from the fire toward us, the smell and taste of the smoke overpowered my senses, even though the fire was about 100 miles away. As temperatures increase, and drought or even drier than average conditions persist, forest fires become a huge threat to the forest, plants, animals — and, of course, to people and structures. Art and caption by Jill Pelto

When creating a piece, Pelto looks for “something that is happening that is important but isn’t well-publicized, maybe something that people aren’t paying much attention to,” she said. Most of her data comes from the National Oceanic and Atmospheric Administration, Climate Central and other researchers whose work she has studied.

Pelto is working on a piece now about a caribou herd in Canada whose population is in decline. “My hope is that by creating this piece, it’ll get more people to stop and learn and think and become more informed,” she said. “My main audience are those people that know climate change is going on and know these are important issues, but either don’t realize how drastic it is or don’t stay informed.”

See more of Pelto’s work below. 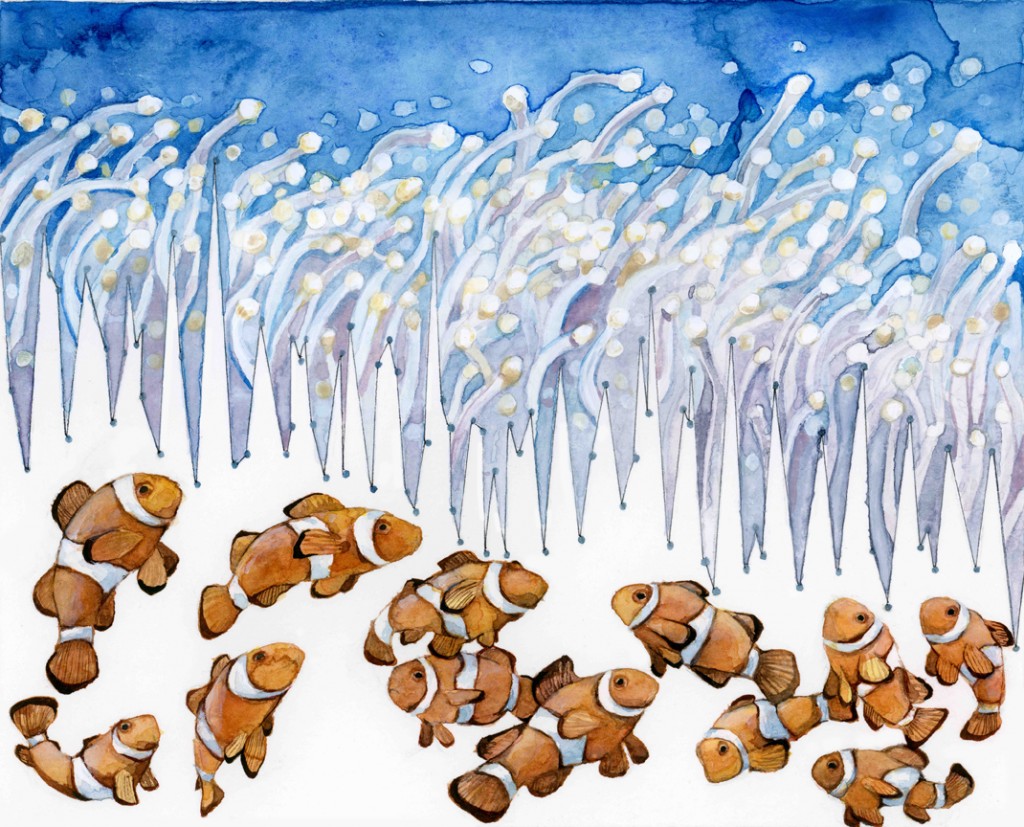 “Habitat Degradation: Ocean Acidification” contains ocean pH data from 1998 to 2012. The decreasing pH is due to atmospheric carbon dissolving into the ocean, and creating carbonic acid, which means a more acidic ocean. Studies on clownfish show that more acidic water alters how their brains’ process information. This affects their ability to avoid predators by detecting noises and find their way home. Art and caption by Jill Pelto 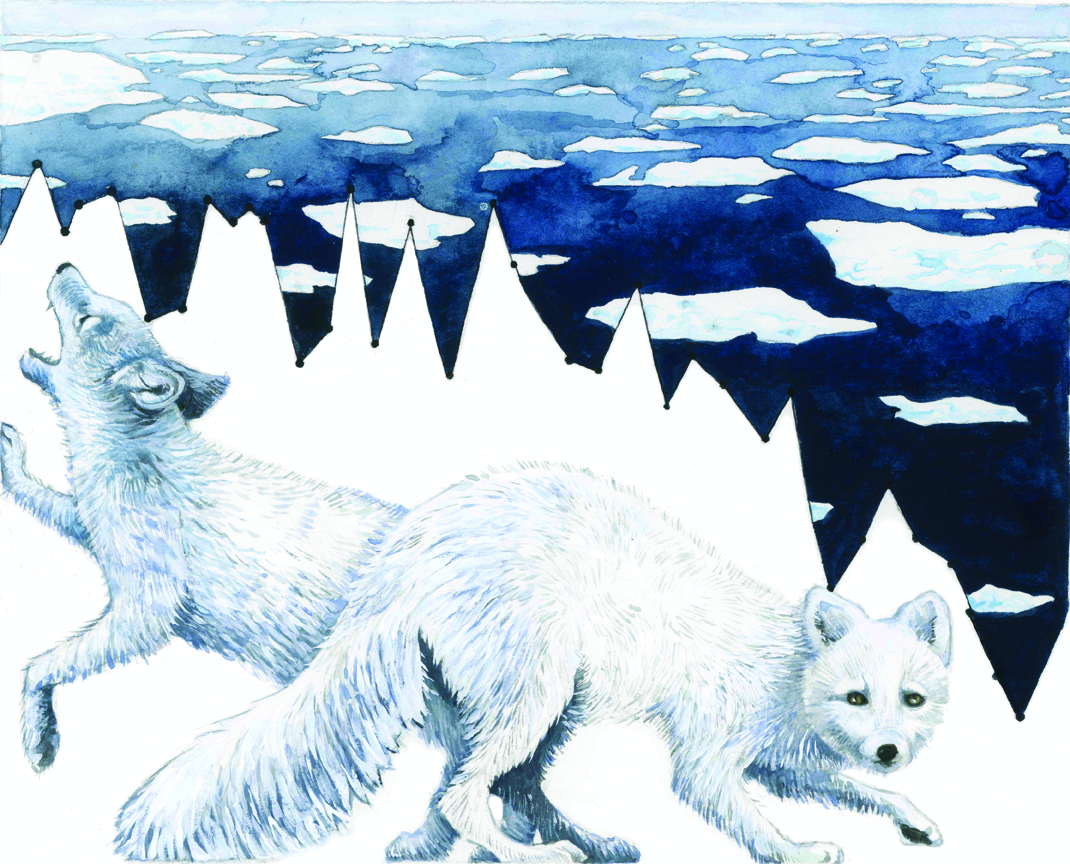 “Habitat Degradation: Arctic Melt” shows Arctic sea ice data from 1980 to present. Rapid warming in the Arctic has caused the sea ice area to decline so quickly that species cannot adjust. The Arctic fox is small and extraordinarily resilient to the most severe cold. They can withstand the frigid north and thus have this corner of the world in which to hunt. But when the temperatures mellow, competition from larger species could overcome them, as other species move further north to escape their own warming environment. Photo and caption by Jill Pelto 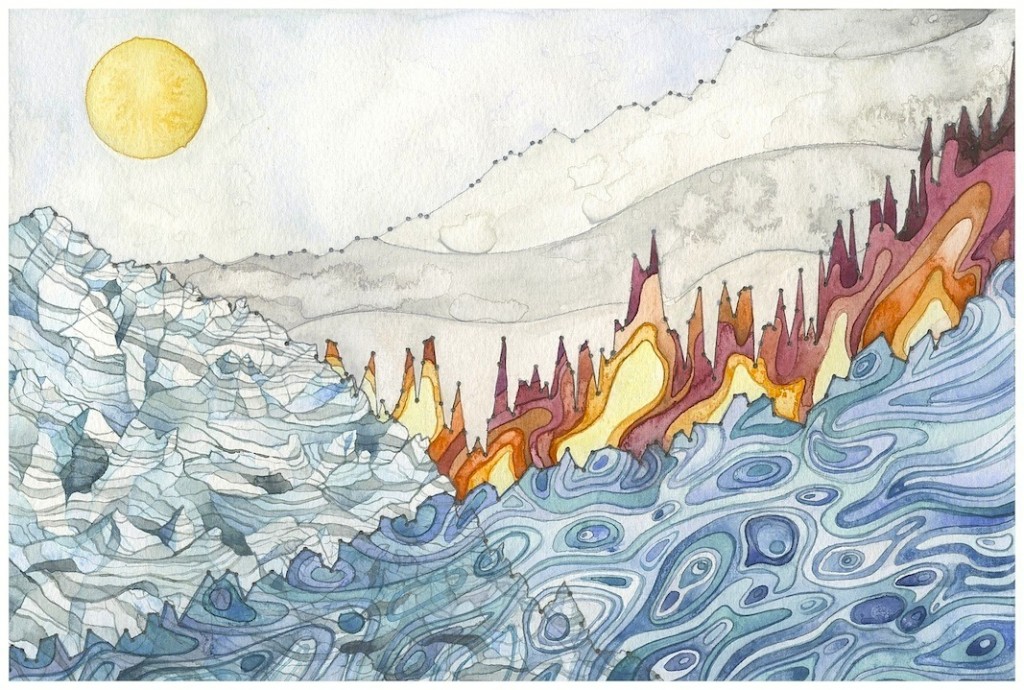 “Landscape of Change” uses data about sea level rise, glacier volume decline, increasing global temperatures, and the increasing use of fossil fuels. These data lines compose a landscape shaped by the changing climate, a world in which we are now living. Photo and caption by Jill Pelto

Left: This piece, "Climate Change Data," uses multiple quantities: the annual decrease in global glacier mass balance, global sea level rise, and global temperature increase. I wanted to convey in an image how all of this data must be compared and linked together to figure out the fluctuations in Earth’s natural history. Art and caption by Jill Pelto