Christine Sun Kim is a sound artist. She sends vibrations of her voice along piano wires strung across rooms, and invites people to feel the strings. She conducts “silent choirs” consisting of facial expressions and glances. And she writes musical scores, which on its own wouldn’t be surprising. Except for one thing: Kim is deaf.

Last June, Art Beat visited Kim at Artisphere, a cultural venue in Arlington, Virginia, where she was an artist-in-residence. Abstract sketches of musical tones lined the walls, visitors interacted with a large visual projection, and a thick metal cable spanned the length of the room. 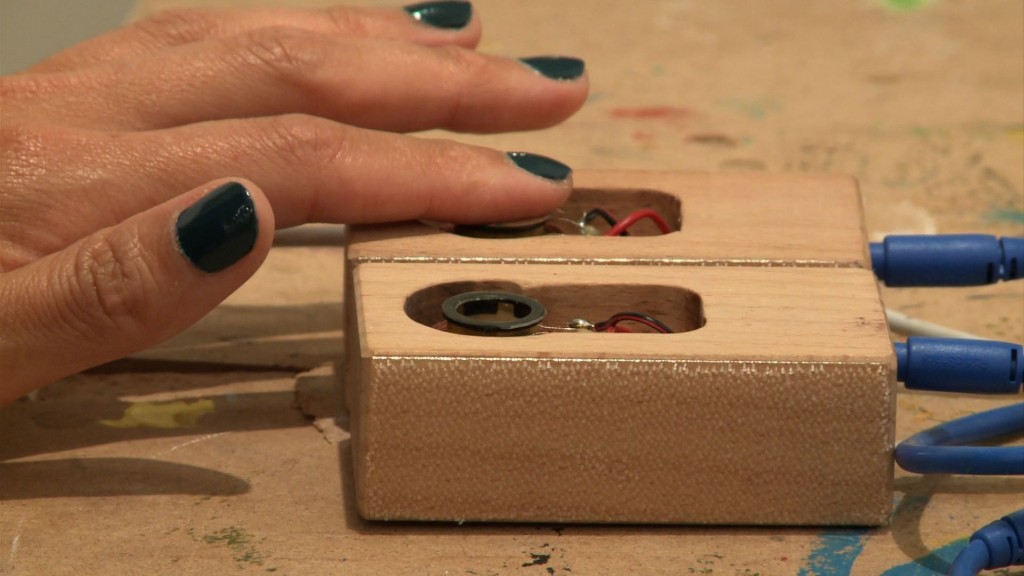 Placing her fingertips on a miniature transducer, a device that converts her touch into sound, Kim edits audio tracks for her performances.

Kim has been deaf since birth, but from an early age, was acutely aware of the social norms governing sound. She was scolded for being too loud. She learned to stay quiet while people were sleeping, and to avoid making noises that others considered “not appropriate.”

But as she grew older, she began to question these “rules”. On a visit to Berlin in 2008, she discovered artists who were experimenting with sound — and realized that it could be a vehicle for her voice and ideas. So Kim began exploring sound art and, in so doing, her relationship to her missing sense began to shift.

Kim has participants interact with sound in Oslo last year. Video by Siri and Sive.

“Now I am freeing myself from what I’ve been taught my whole life,” Kim told Art Beat through her sign language interpreter, Mia Pennywell. “I look at sound from a new perspective that is my own, and discover what sounds I like and why I like them.”

She calls it “unlearning sound etiquette.” That has become a theme of her artistic mission.

Participants reflect on on Kim’s “A Choir of Glances.” Video by UIC Free Art School.

On Dec 17, she was named a senior TED fellow for 2015. Earlier this month, she delivered an audiovisual performance in Stockholm, Sweden. She also has an upcoming a residency at the University of Texas at Austin, where she will create two new sound installations.

Left: Christine Sun Kim is a sound artist who has been deaf since birth. Art Beat met up with her at Artisphere in Virginia to learn more about her installations and her explorations of the social rules governing sound.