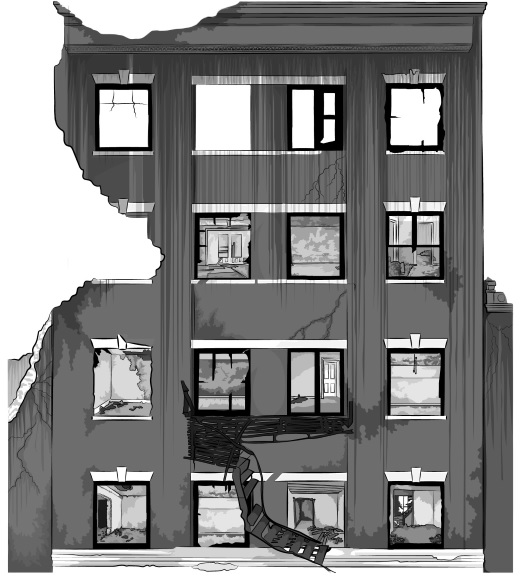 Graphic novelist Kristen Radtke says she didn’t realize she was constantly thinking, writing and talking about ruined places and abandoned cities until someone else pointed it out to her.

As with many fascinations and obsessions, it had taken awhile to sink in.  But once it did, Radtke decided to turn her fixation into a larger project, which ultimately became the new graphic novel-memoir “Imagine Wanting Only This.” 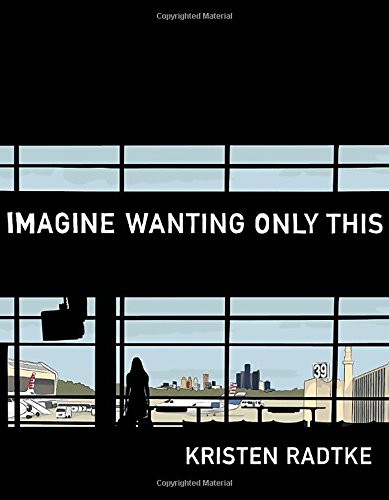 Many people today, it seems, are drawn to scenes of abandonment — from urban explorers like “Abandoned NYC” to photographers who capture places in decay. In part, Radtke thinks this is because America is a relatively young country, so “we’re being confronted with ruins” for the first time. It’s “alternately interesting and frightening because they’re very recognizable. They resemble the way that we live now.”

While the ruins of ancient Greece seem of a bygone era, for example, the haunting images of America’s abandoned theme parks look very familiar.

In “Imagine Wanting Only This,” Radtke weaves together an examination of decaying places — including a church in Gary, Indiana, an island in the Philippines and a forest fire in Peshtigo, Wisconsin — with an exploration of the frailty of the human heart. In the end, she imagines a future New York City, underwater, and what that would feel like.

Below, see some of Radtke’s images of these decaying places, and her commentary on them. In her words: 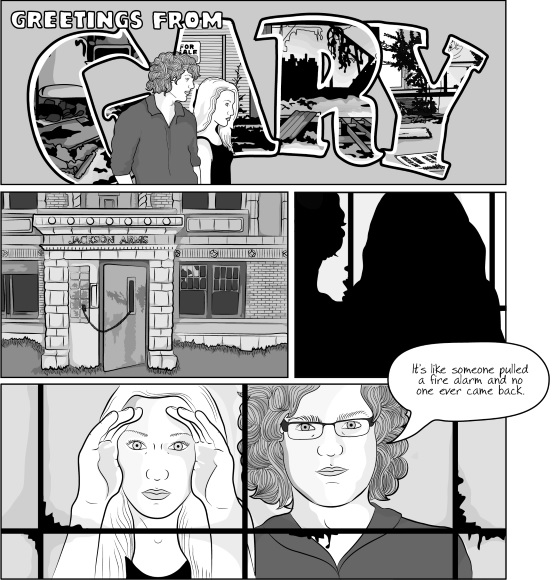 One of the first places in the book is Gary, Indiana. I stumbled into town with a boyfriend. We were young wannabe artists, looking for something new to see. That was a not mindful way to approach these ruins.

I think we sort of have to look at place like a traveler and not like a tourist. We have to remember that there is no such thing as entering a place without context. If we are ogling it, then it is all about the place, not about the people who were affected. 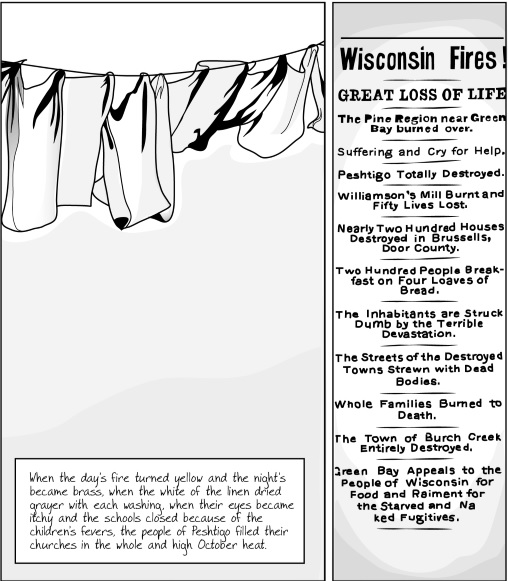 We learned a little about the Peshtigo Fire of 1871 in school. Later, my mother became really fascinated with genealogy and started tracing its roots, and we realized there was a woman in the fire who was our ancestor. According to the Catholic Church, there was a miracle, and our ancestor saved people in a fire. This made me reconsider that fire.

Once I started researching the fire more, I realized it was one of the most bizarre and terrifying moments in natural history in America. It was this perfect storm of everything that collided in this way that made it so deadly. And there was also the fact that scientists studied it later to make firebombs.

I found these historical documents and thought they were so extraordinary, so I layered them with drawings over photos. 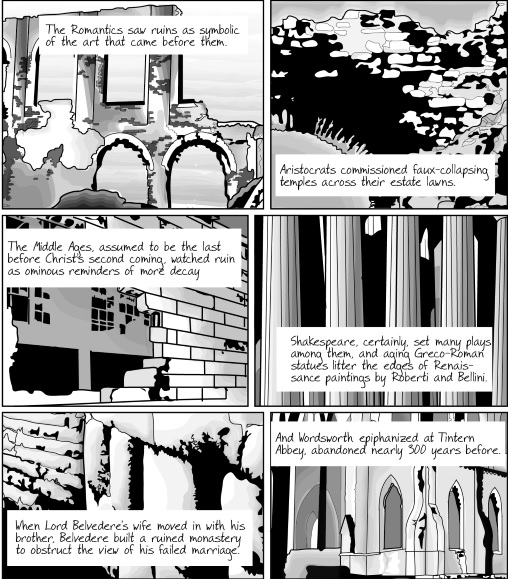 Whether it was in the Philippines, or Gary, Indiana, or elsewhere, I started noticing something — that it was hard to notice what caused a structure to decay. Whether it was bombed out or just decayed on its own, ruins become so similar in their appearance. To me, that was the most alarming thing. Because if you’re just dropped into a place, if you’re not told why something became ruined, you wouldn’t know.

There are so many ways to reach the same end. That’s what I saw in so many places. So many possibilities for how something can become abandoned and useless. 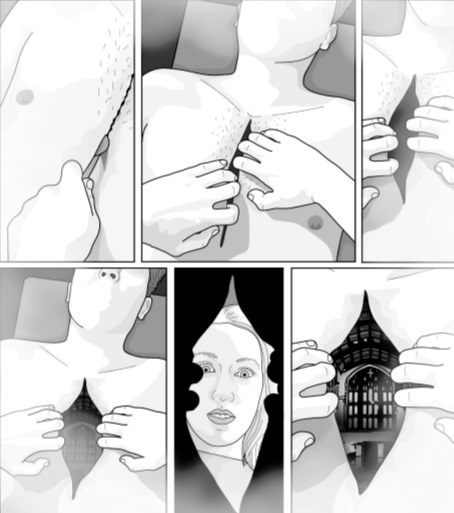 I’ve always been a restless person, anxious about time passing. When I watched a number of my family members die of this rare heart disease that is in my family, I became attuned to how little time we potentially have. And I saw that reflected in our surroundings — and I think I was attracted to those surroundings. 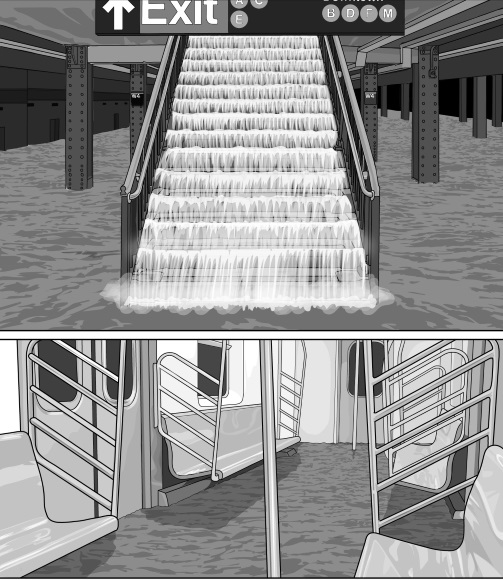 I drew the section of New York underwater just a year before I finished the book. There was the environmental piece, the fever pitch of climate change, which felt to me more present the longer I worked on the book. With every year we understand the damage we’ve done a little bit more. As I was working on the book I became a little more attuned to that, to how these things impact the physical decay.

But I was also thinking so much about the apocalypse. Apocalypse literature and media is so present now. How many movies are about the end of the world? I wonder: Why is that? Why are we so fascinated with these things? 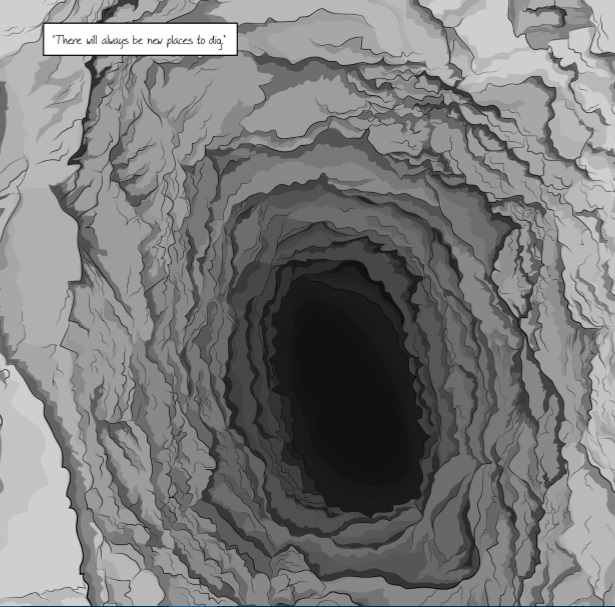 Earlier Tuesday, Radtke drew from her new graphic novel project, about “difficult men,” with us live on Facebook. Watch that video below.