Imagine a smoke-filled library in the year 1873. British gentlemen and scholars of the finest pedigrees sit and discuss the most pressing archaeological discoveries of the day. The group ogles an ancient pennant of war. A Mr. E. Roberts reveals a rare roman coin he’s brought to share: show and tell for the monocle-set.

Then, Mr. H. Syer Cuming stands to read a paper he’s just finished on a decidedly less musty (more lusty) topic: the origin of the Valentine.

Who wrote the first valentine? Cuming wonders. Could it be Charles, Duke of Orleans, who became an accomplished poet during 25 years of British captivity? No, Cuming doesn’t think his famous love poem meets the strict definition of a valentine. Was the first valentine a particular 17th century love poem which was written out in the blood of its composer? Cuming thinks that’s just fancy doggerel. 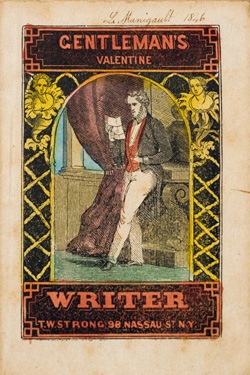 “I have striven hard to find some indubitable and tangible proof that the custom is of long standing,” says Cuming. But the earliest valentines that pass his test are from the late 18th century, and they already resemble the modern valentine: frilly verses punctuated with cute pet names like “Turtle Dove,” written on folded paper and decorated with pink and red hearts.

With such high standards, it’s no wonder that a Valentine’s Day industry sprang up to meet demand. In Cuming’s time, most cards were handwritten and decorated, but that doesn’t mean there weren’t still a few resourceful entrepreneurs who found a way to capitalize on the woes of the romantically disinclined. If an amorous author found himself short of verse, he needn’t look further than the local bookseller. Around the turn of the 19th century, six-penny pamphlets that contained popular collections of pre-written love messages were sold as “Valentine Writers.” Sometimes serious, sometimes comical, they even included standard responses for ladies to send to compliment their courter’s verse.

Many even included verses appropriate for wooing a mate in a specific trade, such as this teasing valentine taken from an 1850’s-era pamphlet, which was suggested as suitable for a bookbinder:

That ever yet handled a bookbinder’s tools;

Of all the big boobies that ere met my view–

Oh well may the maidens all giggle and laugh.

To see such a carcase well bound up in calf,

Oh! Believe me, for ever and ever you’ll whine,

Ere you press to pour chops a gay young Valentine.