Behind the castle doors, a crew of Renaissance fair workers find family amid the fantasy

For nine weekends across August, September and October, the festival opens its castle doors to a mass of visitors dressed in anything from a simple cardboard Burger King crown to hundreds of dollars worth of corsets and capes, providing an escape into another time.

Michael Valentine, on the other hand, lives a more permanent and costume-less life on the fairgrounds year-round, and has for 21 years. Valentine’s home is a little red house straight out of a fairy tale, called Rosie’s Posies Cottage, not far from the festival gates.

The fair is “a wonderful thing 19 days a year. I’m glad it’s not 119 days a year,” said Valentine, the festival’s unofficial groundskeeper and guard.

A seasoned carpenter originally from Florida, Valentine, 66, first arrived at the fair 32 years ago after working at several others, and stayed on year-round beginning in 1996, keeping up the stores and other buildings on the property during the off-season. During festival days, Valentine escapes the crowds to his bedroom to nap, read or watch television, while outside guests to are free to get their Renaissance “freak on.”

“I won the prize,” Valentine said. “This was my wish. I just said, I want to live in a place where I can commute in a wheelbarrow and not have the hassles of the 21st century. I found a way out of that system.” 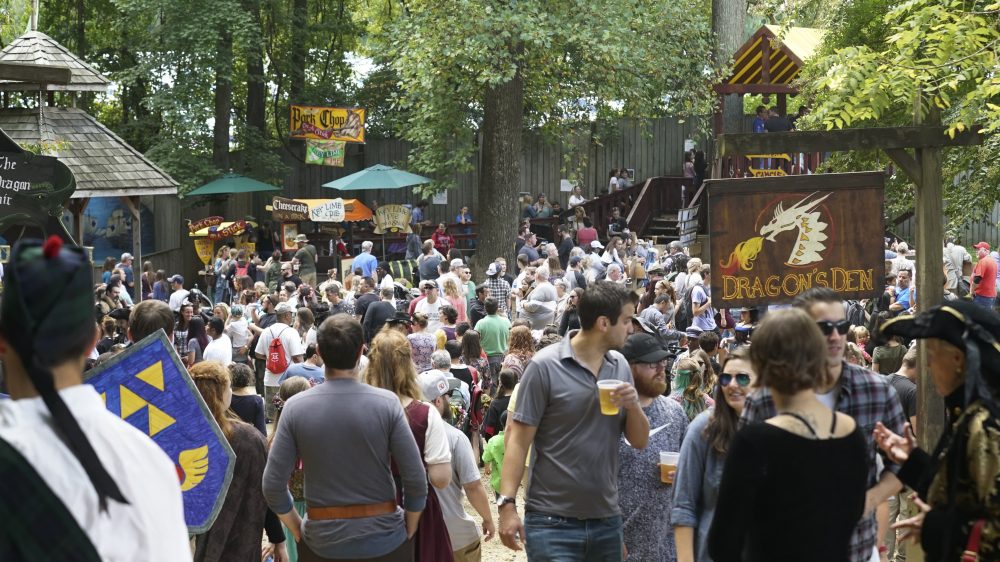 Jules Smith Sr. established the Maryland Renaissance Festival 41 years ago in Columbia, Maryland, later moving it to an area of farmland-turned-forest outside Annapolis. The grounds have expanded over time to allow for more vendors, events, performances and food — tons of it.

“We do what we’re calling high-touch entertainment — it’s very sensory deep: you smell, you taste, you feel, you hear, you get caught up in it,” said Jules Smith Jr., 59. After Smith Jr. asked Valentine to occupy the festival in 1996 during the off-season, he said, “he just kind of stayed.”

On a recent September weekend, a corseted woman stood in line at the curly fry stand, a bespectacled man in leather armor laughed at a baby and little fairy princesses ran around in Instagram-worthy flower crowns. It was a consortium of “Harry Potter,” “Game of Thrones” and “World of Warcraft” fans, and of those simply looking for escape from the modern world. 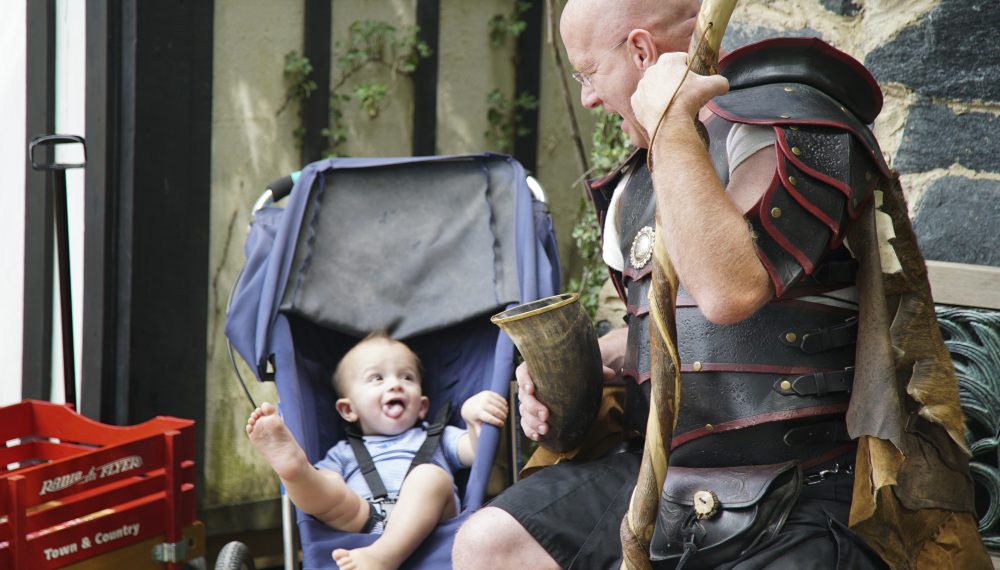 Though the world of the festival is set during Henry VIII’s reign, with actors parading in period garb, festival visitors interpret their costumes more liberally and vendors have followed suit, offering masks, nymph ears, armor and capes. On their outing into the past, guests can stop at the Globe Theatre for Shakespeare readings or watch rounds of jousting, officially the Maryland state sport since 1962.

But behind the scenes of this fleeting fantasy world is a tight-knit community of artisans, entrepreneurs and free spirits who reunite at the Maryland festival every year, and have for decades. 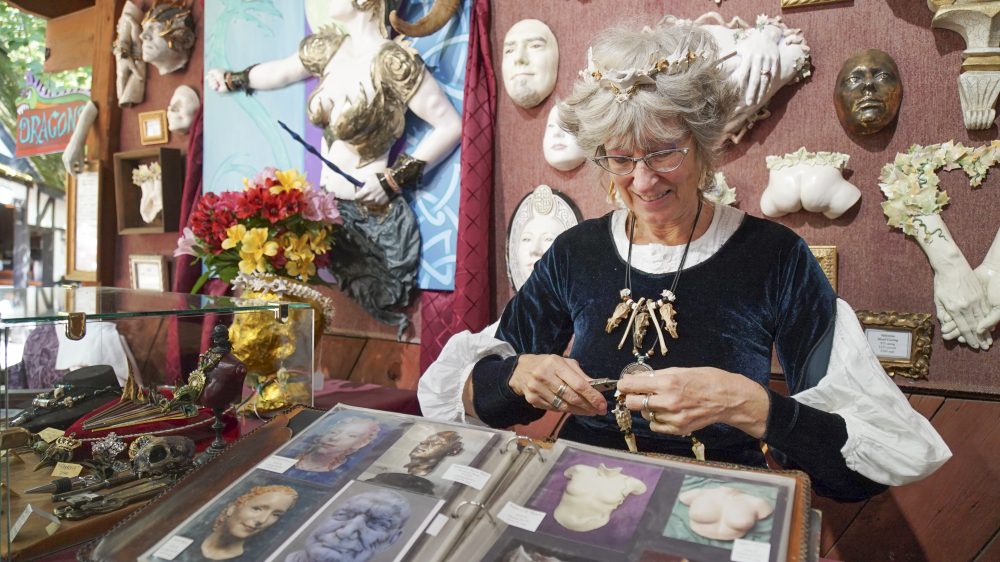 Ann Curtis at her booth at the Maryland Renaissance Festival. Photo by Abbey Oldham/PBS NewsHour

“It’s our cabin in the woods, it’s a fantasy village,” Curtis said.

The two met at a Texas festival in 1986 and have traveled from their home in Texas to the fair for three months every year for the past 24 years.

They act as the social glue of a group of longtimers at the fair, according to Valentine, a close friend of the couple. Weaver used to create a magazine and newsletter called “The Rogue’s Alternative Gazette” for the festival community, while Curtis threw resplendent parties, complete with 1940s tablecloths, silverware and expensive dishes, Valentine said. Now she flits through the village, meeting friends for dinner, painting signs for other vendors, meeting newcomers and keeping tabs on the goings on of the festival.

“The community is really important,” Curtis said. “The family that is here will support me as a human being in the same way that a blood family would.”

Curtis told the story of a sword-swallowing magician named Johnny Fox who was diagnosed with cancer in April of this year. “Everybody chipped in, everybody helped out,” said said. Fox still performs for fans at the Royal Fox Theatre, which was renamed after him this year.

Michael Higgs, 72, a local vendor who has been with the festival since it opened, said the atmosphere has become more professional over time because of the surge in people and vendors, and that “there was a lot of wildness” in the beginning. 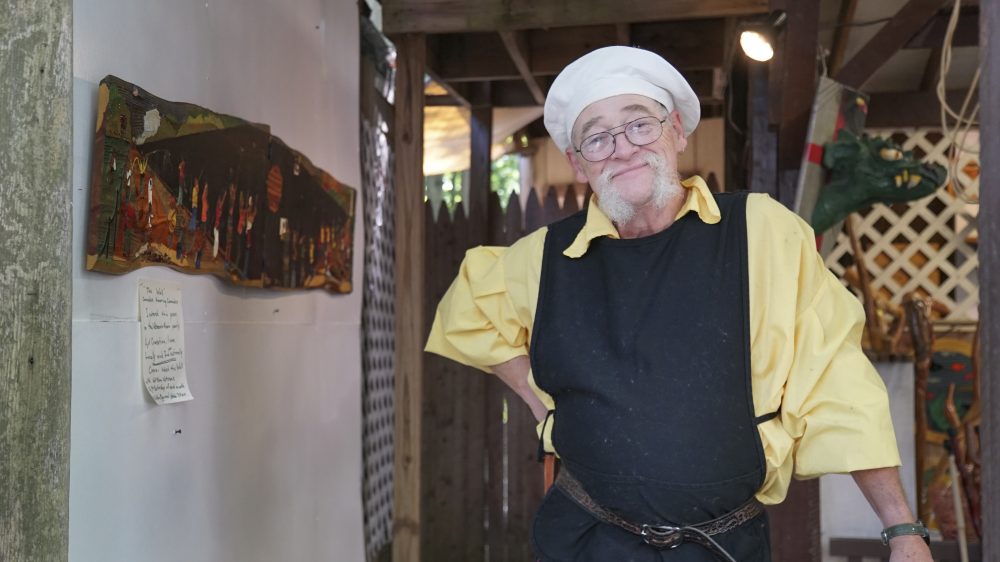 Michael Higgs, also known as the “King of Swords,” at the Maryland Renaissance Festival. Photo by Abbey Oldham/PBS NewsHour

Higgs whittled wood as a child, and grew up to be a combat photographer in Vietnam. Now, sporting a tunic and a pair of mutton chops, he’s the King of Swords, at least when he’s not teaching at a local school. He sells thousands of swords at the fair each year.

Higgs started the business with his parents, who famously showed up in costume with a vat of chili the first day of the festival. Now his daughter Molly, 33, works with him every year, having grown up around his merry vendor friends, and the famed chili recipe that she still gets requests for. “If you count in utero, this is my 34th year,” she said.

“We’re now on the second generation of vendors and they’ve inherited their parents businesses,” said Smith Jr., the eldest son of the festival’s founder. “It is a real community, I’ve known most of these people over 30 years.”

Vendors own their buildings, their investment in the festival and its future. According to the vendors, the Smiths run the festival both as purveyors of escapism and ethical businessmen.

“A lot of festivals are little fiefdoms, the owners are the rulers and they make everyone do everything,” Smith Jr. said. “Our philosophy is we’re all in this together.” 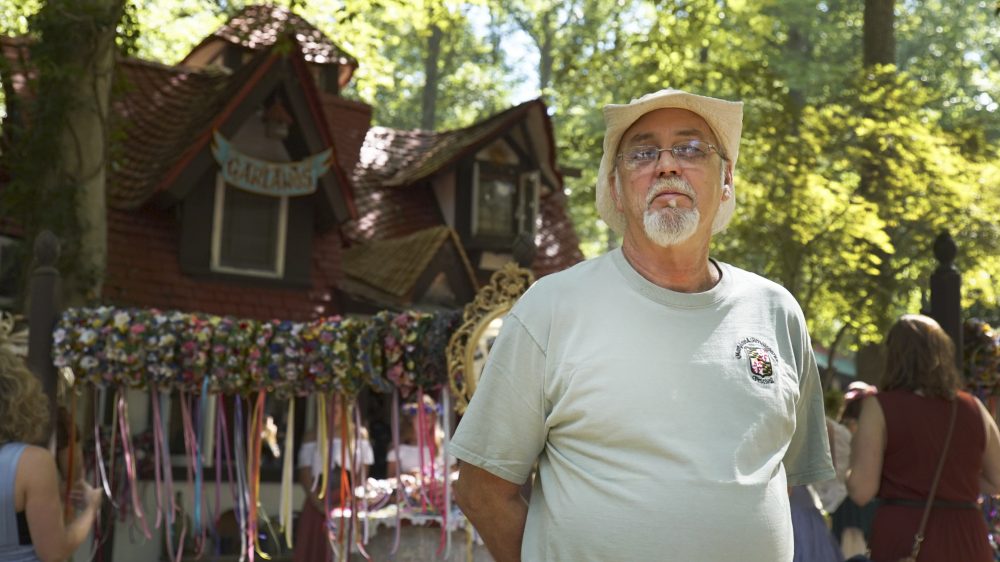 This is what makes the vendors stay, according to Curtis and Weaver. That, and the other vendors at the fair. “These people become very dear friends for three months,” said Higgs, who hosts a cookout every year on Labor Day weekend. And on Mondays there’s the community Bizarre Bazaar, where the community gets together for a potluck breakfast to rehash the weekend and show new crafts or skills.

“I know everybody here. I know the flower vendors, I know the people that run the food booths, and the entertainers are all friends,” Curtis said. “Everybody out here wants to do things to make the festival a better environment and it’s why we stay here.”

The festival is structured to continue for generations of future vendors, performers and attendees. For the current festival workers, “this is their home,” Smith Jr. said.

And it remains home for Valentine, who says he wants to be buried on the grounds: “I’ve already got a verbal agreement with Jules to drill a hole and drop my carcass in it and plant a tree on top with a little brass plaque: ‘Michael Valentine. Have a piece of fruit.’”