Burn this story about Yoko Ono after you’ve read it

The instructions were simple, but take years to complete.

One night in London more than 50 years ago, Yoko Ono broke a vase on stage before her audience. She then asked them to pick up a piece, one by one, to carry home.

As retold in her subversive book of instructions “Grapefruit,” which came out in 1964, anyone who took a fragment of the vase would promise to meet again in 10 years to reassemble the smashed object.

At a one-night-only tribute Sunday at the Hirshhorn Museum and Sculpture Garden in Washington, D.C., Ono’s “Promise Piece” was once again orchestrated, this time by experimental artist and musician Kim Gordon.

At the end of the night, a white-and-blue vase that stood as high as Gordon’s thighs was hoisted on stage next to her. Gordon explained that she and Lizzi Bougatsos and Camar Ayewa — the other artists who performed in the museum’s central courtyard — had planned to shatter the vase in front of the hundreds of people who gathered for the Ono tribute. But due to “conservationists,” “it had to be broken in a very special way,” Gordon told the crowd. 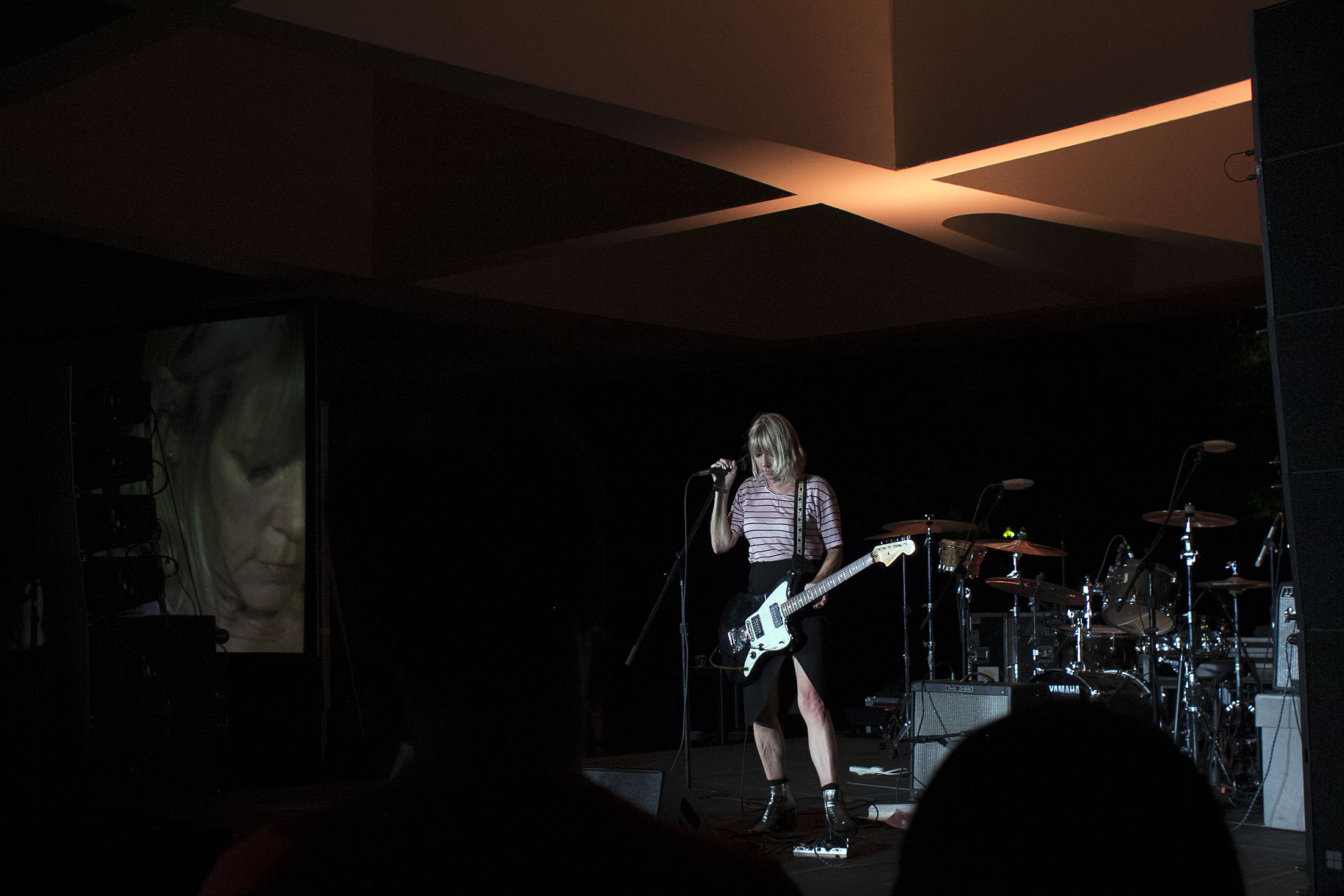 Musician Kim Gordon performs at a one-night tribute concert in honor of Yoko Ono at the Hirshhorn Museum in Washington, D.C. this past weekend. Photo by Joshua Barajas/PBS NewsHour

“So, it’s been pre-broken,” Gordon said to laughs in the audience. Black-clad handlers had unfurled a cloth that held hundreds of white and blue fragments and placed them next to the unbroken vase.

“This is what the vase looked like,” Gordon said.

Gordon, who headlined the performances that night, didn’t specify a 10-year deadline, opting instead to say that everyone would meet again “at a certain time.” Online, there are people asking whether Ono would let them know when the time comes.

@yokoono I have the pieces of the vase that we smashed and shared in Dallas 10 years ago. Is it time to reassemble? pic.twitter.com/KI8K3xxLNI

Sunday’s concert was the culmination of the Hirshhorn’s “Summer of Yoko,” an exhibition that celebrated, and in some cases recreated, four of Ono’s works, two in the participatory style of art that became the focus of “Grapefruit.”

As soon as you walk through the doors of the museum, you’re greeted with Ono’s “My Mommy Is Beautiful” participation piece. It’s a white canvas blanketed with layers and layers of personal messages to mothers. I leave a message about Amanda, mentioning all the times she sheltered me and my siblings during tornado warnings in Texas. From there, I decide to revisit my own copy of “Grapefruit,” which was bookmarked to the “Water Piece” page. It has a one-word instruction: Water.

Recognition didn’t come easily to Ono. She often described herself as a “misfit” despite being known in the art world at the time. “Grapefruit,” as a conceptual art book, itself received a lukewarm response upon its introduction to the public and critics in 1964. Ono tried selling her earliest copies on the streets of Tokyo, lugging them around in an orange box, but the interest was minimal.

Ono, who witnessed the horrors of the second world war in Japan, often speaks of the heart’s role in dealing with atrocities in life. Her activism has long focused on recognizing the ability to repair in the wake of destruction. The broken piece of vase is a license for anyone to take part in that rebuilding — a promise to engage.

Before any performers took the stage Sunday, Ono’s recorded voice boomed through the darkened courtyard of the Hirshhorn, telling people to “Imagine peace.” It was repeated enough times that I lost count. Then Ono’s 1994 song “Rising” was heard with the lyrics: “Listen to your heart. Respect your intuition,” repeated. During the song, a clip of fire and charred, silicone bodies played. The woman next to me cried. The video made me think of the fact that Ono was in Tokyo when hundreds of American B-29s firebombed the city in 1945. And to drive the point about the heart’s power home, a new Ono mural was painted last week on the side of the Union Market in D.C., three miles away: “Relax. Your Heart Is Stronger Than What You Think!”

“[Ono] is the meeting point of the popular and the avant-garde,” said Mark Beasley, curator of media and performance at the Hirshhorn. The Japanese-American artist’s experimental installations and music predated the kinds of performative art pop artists regularly produce these days. Beasley cited the German electronic band Kraftwerk mixing art with music at the Museum of Modern Art and Kanye West’s performance art turning up, well, wherever.

“[Ono] was doing this and presenting those ideas when it was more difficult,” he said. “Now, it’s standardized.” 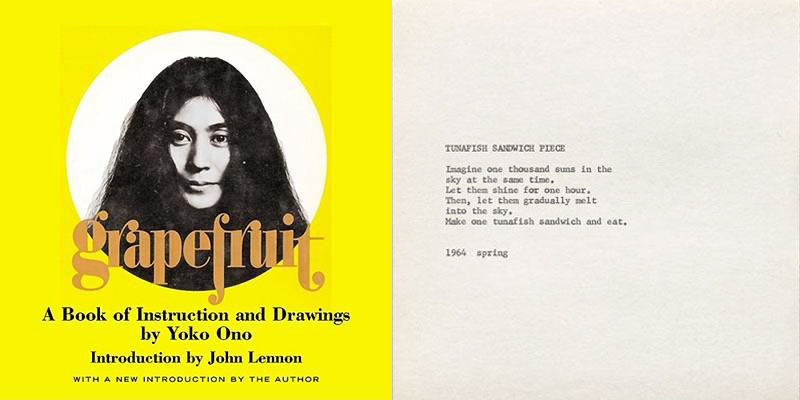 Ono published “Grapefruit” on July 4, partly as a declaration of her own independence, according to Beasley. The title may reflect Ono’s divided time in both Japan and America, a hybrid identity just as a grapefruit is a hybrid fruit.

Ono, as a divisive figure, also had a way of infiltrating the mainstream. According to a newspaper clipping I found from 1985, the artist was once courted to star in a television series styled after the soap “Dynasty.” “Ono reportedly has been offered — and is acting very receptive to — the role of the Japanese wife of a rich and powerful Englishman.” (The show didn’t happen.)

“Grapefruit” is a quick read, but the delight comes from Ono’s short, imaginative instructions. Some are straightforward: “Laugh Piece” tells the reader to “Keep laughing a week.” It gets weirder from there. “City Piece” instructs someone to “Walk all over the city with an empty baby carriage.” Or funny: “Dance Piece” says to “Have a dance party. Let people dance with chairs.” 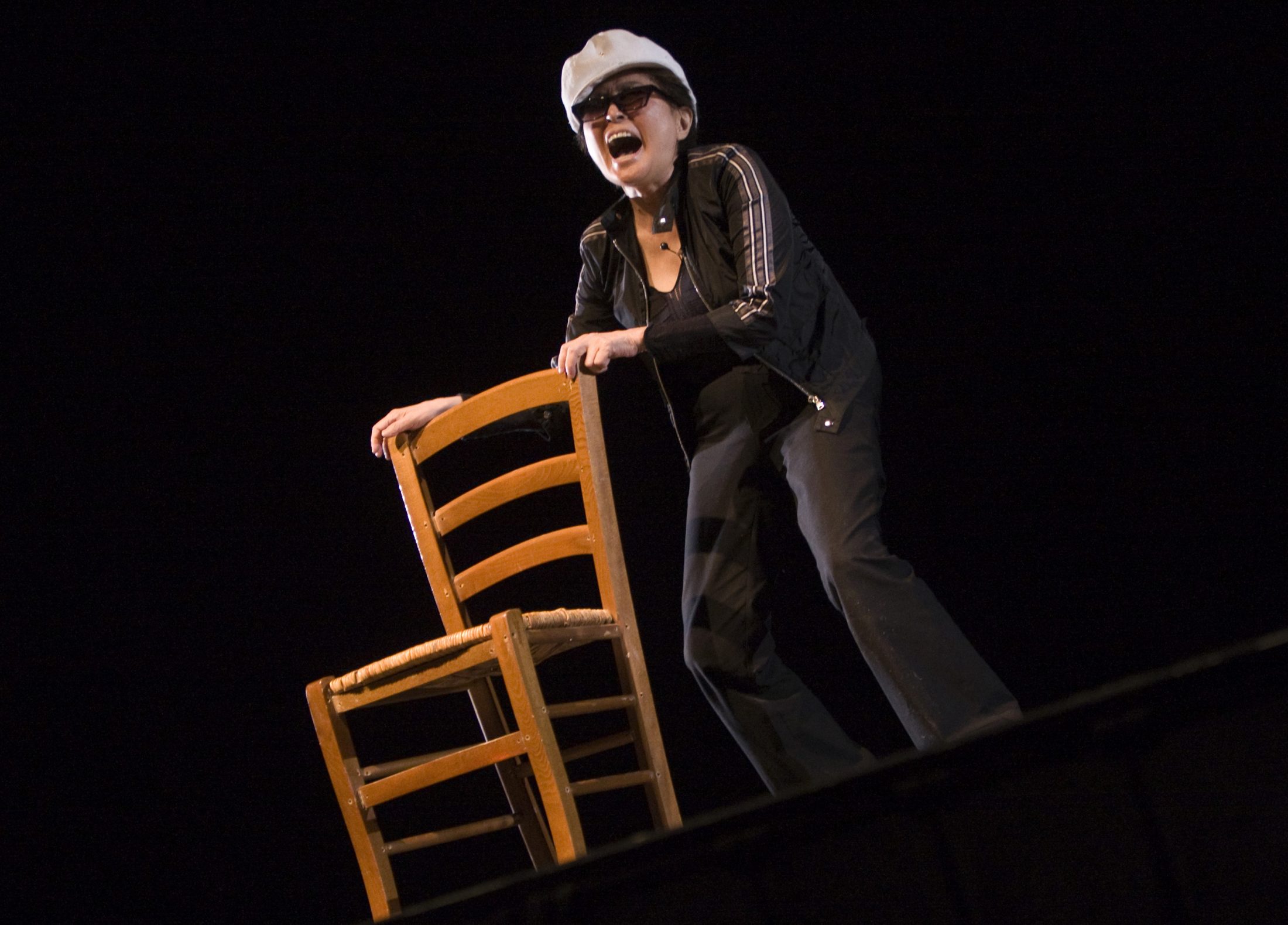 Artist Yoko Ono performs during her installation entitled “Anton’s Memory” at the Arsenale during the 53rd Biennale Internazional Art Exhibition in Venice in 2009. Photo by Alessandro Bianchi/Reuters

The artist Ayewa, also known as Moor Mother, performed “Beat Piece,” and with her electronic thumps, played with the pace of an erratic heartbeat.

I’m still trying to figure out how to best do “Cloud Piece,” which says to “Imagine the clouds dripping. Dig a hole in your garden to put them in.” I don’t have a garden yet.

Beasley said the idea that we’re all inherently creative and can make art is something that the public understands a little more now. And when the artist Lizzi Bougatsos of Gang Gang Dance did her best to mimic and build upon Ono’s trademark groans and throaty yelps at the tribute concert, it seemed to me that Ono was finally getting her due.

But if “Grapefruit” was a tough sell all those decades ago, it did at least have a fan in her husband John Lennon. The Beatles member told Rolling Stone in 1971 that he first met Ono at one of her shows in London, where he came across an apple on display.

“There was an apple on sale there for 200 quid, I thought it was fantastic – I got the humor in her work immediately. I didn’t have to sort of have much knowledge about avant garde or underground art, but the humor got me straight away,” Lennon said.

Artist Yoko Ono interacts with the artwork “Apple” at the 2015 Museum of Modern Art exhibition dedicated exclusively to her work, titled “Yoko Ono: One Woman Show, 1960-1971”, in New York. Photo by Lucas Jackson/Reuters

At an Ono respective at the MoMA in 2015, a Granny Smith apple greeted museum-goers. A plaque below read: “APPLE.” Or, as Ono herself has said about the artwork: “There is the excitement of watching the apple decay, and the decision as to whether to replace it, or just thinking of the beauty of the apple after it’s gone.” The MoMA retrospective also included many of Ono’s own interpretations of her instructions in “Grapefruit.”

“I think now more than ever, humor is a way to talk about things difficult to talk about,” Beasley said of Ono’s work. “Yoko’s humor is smart. It’s not slapstick, it’s a refined form of humor.” It’s as if she’s inviting people to “turn the world upside down and stare in the crack on the side of it,” he said.

Lennon himself was directly inspired by “Grapefruit.” The book’s instructions often used “Imagine” as a directive and, according to the late Beatles member, was the foundation for the 1971 song of the same name. But Ono wasn’t officially recognized as a co-songwriter until 46 years later.

When the couple sat down for an interview with the BBC in 1980, Lennon explained why, citing his own sexism prevented Ono from being properly credited for the song’s lyrics and concept:

“Those days I was a bit more selfish, a bit more macho, and I sort of omitted to mention her contribution. But it was right out of “Grapefruit,” her book … But when we did [“Imagine”] I just put “Lennon” because, you know, she’s just the wife and you don’t put her name on, right?”

When “Grapefruit” was redistributed almost 30 years later, the book jacket added an instruction from Ono: “Burn this book after you’ve read it.” Right below is Lennon’s ringing endorsement: “This is the greatest book I’ve ever burned.”

I haven’t burnt my copy of “Grapefruit” yet. And I’ve placed my broken vase fragment in a shadow box frame, ready to open in about 10 years.

Left: Yoko Ono pauses at one of the entry points to her art work "Entrance" at the Teatro Nacional in Brasilia, Brazil. Photo taken in 1998. Photo by Reuters