Can’t decide what to be this Halloween? How about a Banksy 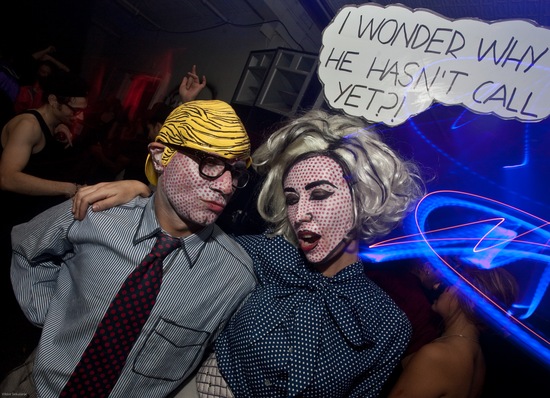 You will need plenty of face paint and a little patience to pull off these Halloween costumes inspired by Roy Lichtenstein’s pop art. Photo by Flickr user Viktor Sekularac

The pumpkins are out, the haunted houses are revving up their scare tactics. Halloween is just around the corner and celebrants are prepping their costumes. Do you have yours picked out or do you need a little inspiration?

We got our inspiration from some creative Flickr users. We crawled the site looking for Halloween observers who channeled their inner makers and built costumes based on well-known works of art. Check out their innovative ideas and read about the stories behind them. And if you get the urge to create an ensemble yourself, read below for instructions on how you can share your Halloween pics with us.
If street art is your style, try your hand at recreating an original Banksy: 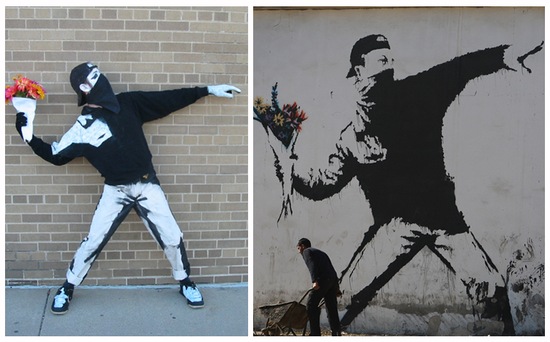 Milwaukee resident Jason McDowell dressed as a famous piece of street art by the anonymous artist known as Banksy. The original work is on a wall in West Bank’s biblical city of Bethlehem. Photo by David Silverman/Getty Images

Jason McDowell: Banksy was the first street artist to make me recognize that there can often be more to graffiti than a simple scribble or a defacing of property. There can be repeating themes and deeper social analysis, from small observations to grand ideas. I don’t know if it’s “real art” or if it’s worth zero or $1,000,000 but Banksy does have a knack for getting people to think about their surroundings.

Want to experience the world through a Surrealist eye? Use Magritte as inspiration: 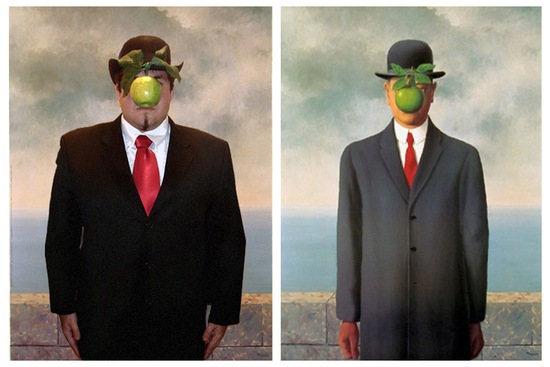 Pittsburgh resident Tim Notari dressed up as Magritte’s “Son of Man” for Halloween recently. Photo of Notari courtesy of Flickr user Jennifer Murawski and the original “Son of Man” from wikicommons

Tom Notari: I could see quite well actually even though my face was mostly obscured, which I think might be a brilliant meta commentary on Magritte’s original piece. I had all my peripheral vision and could see through the fake leaves.

If your heart is more with the impressionists, why not “Scream” this Halloween. Try recreating this original Edvard Munch: 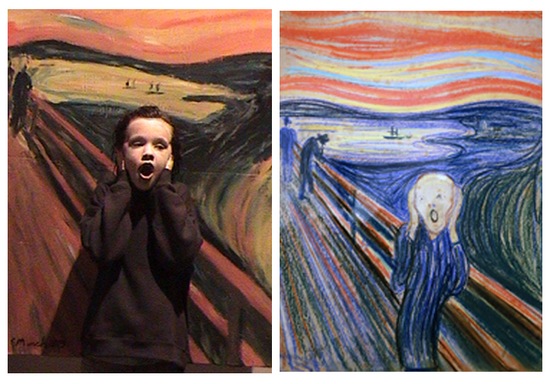 Owen Flaherty was only 7 when he posed as Edvard Munch’s famous “Scream.” Photo courtesy of Flickr user Tim Flaherty and original by Robin Marchant/Getty Images

Tim Flaherty, Owen’s father: Owen won a costume contest at the North Carolina Museum of Natural Science with it and just about everyone recognized the painting, especially when he put his hands on his cheeks and made the “Scream Face.” Also, I remember that it was kind of breezy and he had issues walking straight.

If you just can’t decide on one artist, no worries. Grab a group of friends and go as a traveling modern art exhibit: 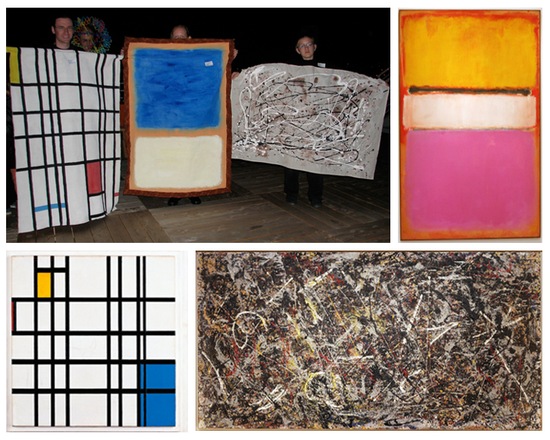 Windell Oskay: We painted them ourselves. The Rothko-style painting took quite a while to get something approaching dense color, and the Mondrian took a lot of planning and care. The Pollack was probably the most fun and fastest.

We’re asking: Planning on going as famous art this Halloween? Show us. Tweet @newshourartbeat or tag @NewsHour on Instagram using #costumecanvas. We’ll round up some of the best and share them with our readers.