Capturing blues in black and white

There was Neal Pattman, who sang gospel songs while waiting for airplanes to take off. John Lee Cole, who lived in an old shack with one light bulb. And Dr. G.B. Burt, who called Duffy from his deathbed looking for a gig.

As founder and executive director of the Music Maker Relief Foundation, a North Carolina-based nonprofit, Duffy snapped photos while helping musicians make ends meet. The photos and captions in his new book of his black-and-white photography tell a rich and vivid history of the life and music of these artists. 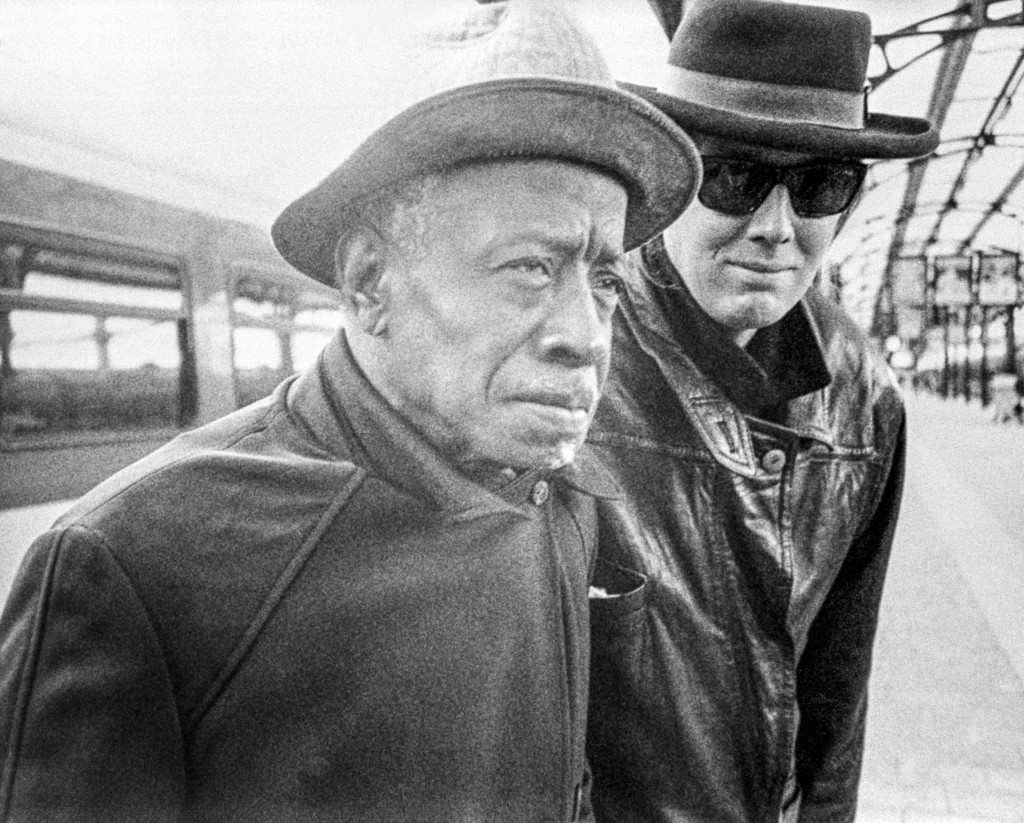 Tim Duffy and Guitar Gabriel in Utrecht, Holland, 1991. “When I knocked on Guitar Gabriel’s door, he hobbled out, hugged me and said, ‘Boy, I know where you want to go. I’ve been there before. I will take you there, but my time ain’t long. I want you to promise me that when I die, you’ll bury me with my guitar.'” Photo courtesy Tim and Denise Duffy

At least in the beginning, Duffy says he spent hours behind a viewfinder and in the darkroom in hopes of landing great shots to use for an album cover, or to promote his musicians. What he lacked in formal training, he says he made up for with time and dedication. 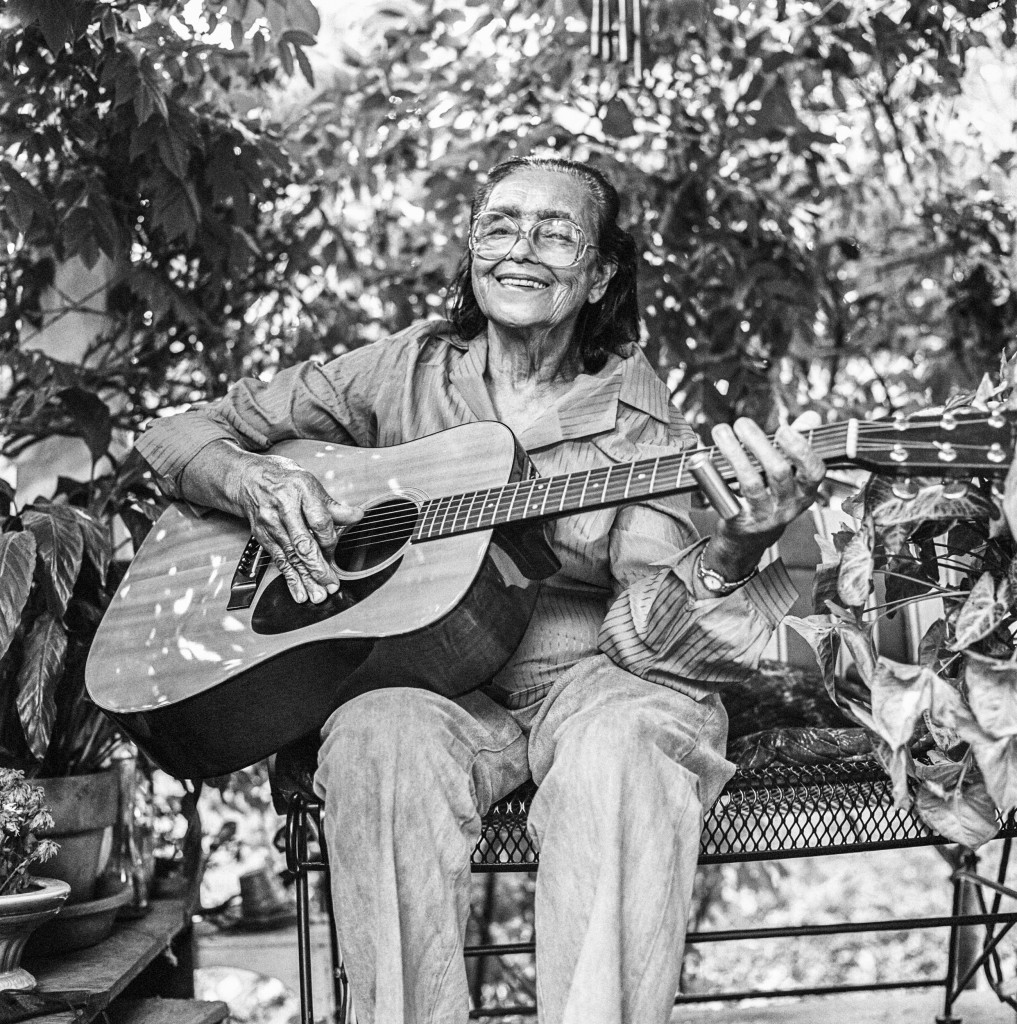 Etta Baker, Morganton, North Carolina, 1996. “Etta Baker was a modern master of Piedmont Blues. Her versions of ‘One Dime Blues’ and ‘Railroad Bill’ became standards during the Folk Revival in the 1960s after folk singer Paul Clayton produced the hugely successful ‘Instrumental Music of Southern Appalachians.’ This record has been in print since 1959.” Photo courtesy Tim and Denise Duffy

“You have to really get lost in the milieu of hanging out with these artists, and spending time, inordinate amounts of time,” Duffy says. “Then there’s that moment — that moment of you together, sitting on a park bench in Lugano[, Switzerland] — you did the festival, and you’re about to go home, and you’re proud … click. That’s how I take pictures.”

“We Are the Music Makers!” a collection of 20 years of photographs, written by Duffy and his wife Denise, was published this month.

Listen to some of the songs Music Maker artists have produced over the years. Below is a playlist of a handful of musicians we heard perform near Durham, North Carolina recently.

The photographs are currently on view at the ArtsCenter in Carrboro, North Carolina until Oct. 31, and will be at the B.B. King Museum in Indianola, Mississippi, from Oct. 23 until Nov. 20. 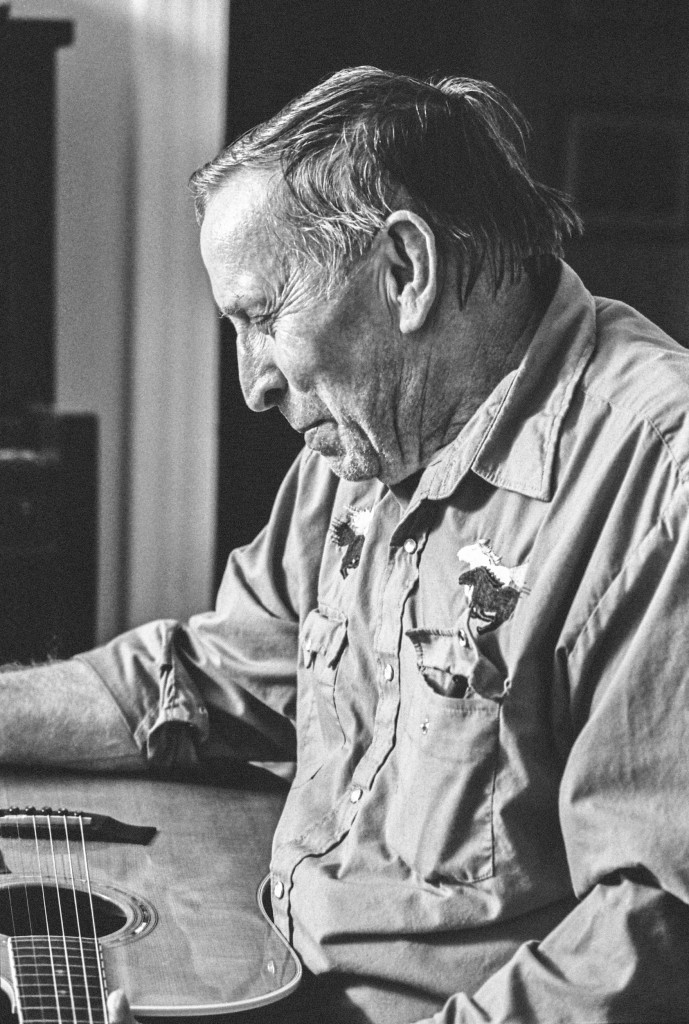 Check out more of Tim Duffy’s photos below and stay tuned in the coming days for the PBS NewsHour’s full report on the Music Maker Relief Foundation. 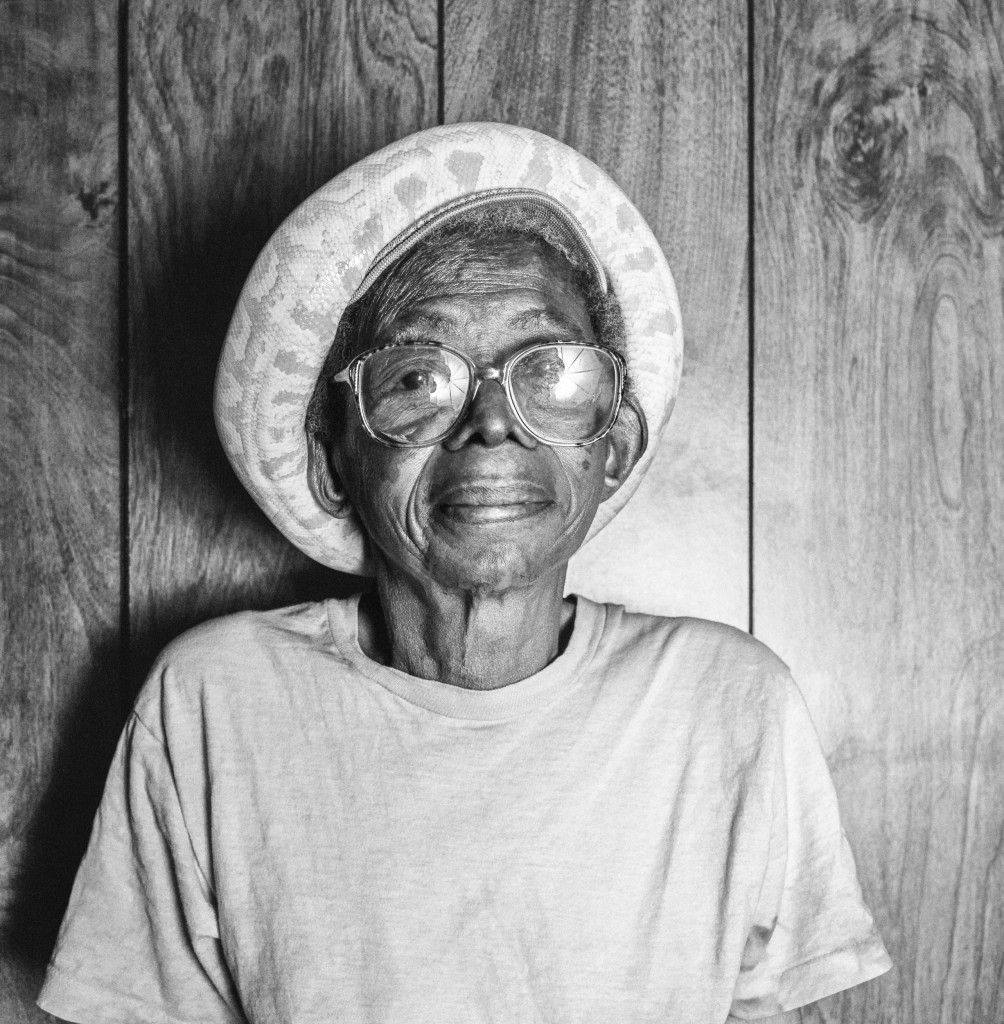 Willie Mae Buckner and Siam, Winston-Salem, North Carolina, 1994. “One day when I visited her, she called me into her bedroom to see something special. She lifted up her pillow and there were 10 baby pythons coiled around her Smith & Wesson. She cackled, ‘Do you think anyone is going to mess with me?’ Willa was one of our first artists, and we made her lifelong dream come true when she performed her hilarious, risque songs in a Circus Blues show at Carnegie Hall in 1993.” Photo courtesy Tim and Denise Duffy 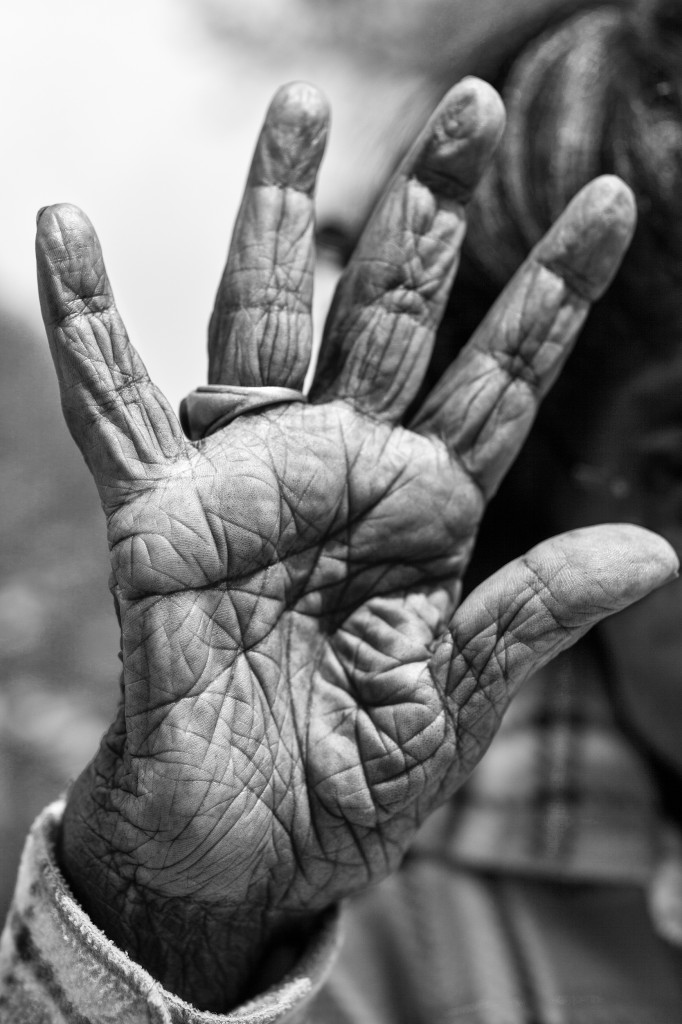 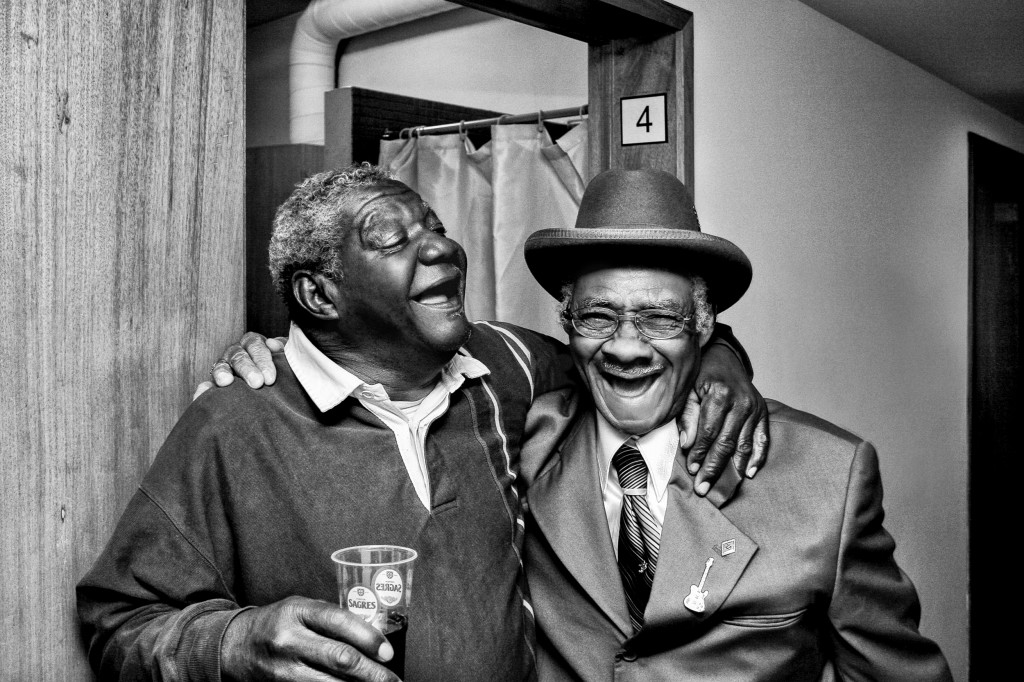 Macavine Hayes & Little Freddie King, Porto, Portugal, 2006. “When these artists spend time together performing on the road, they are inspired to play their best, to pull out old material and write new songs.” Photo courtesy Tim and Denise Duffy 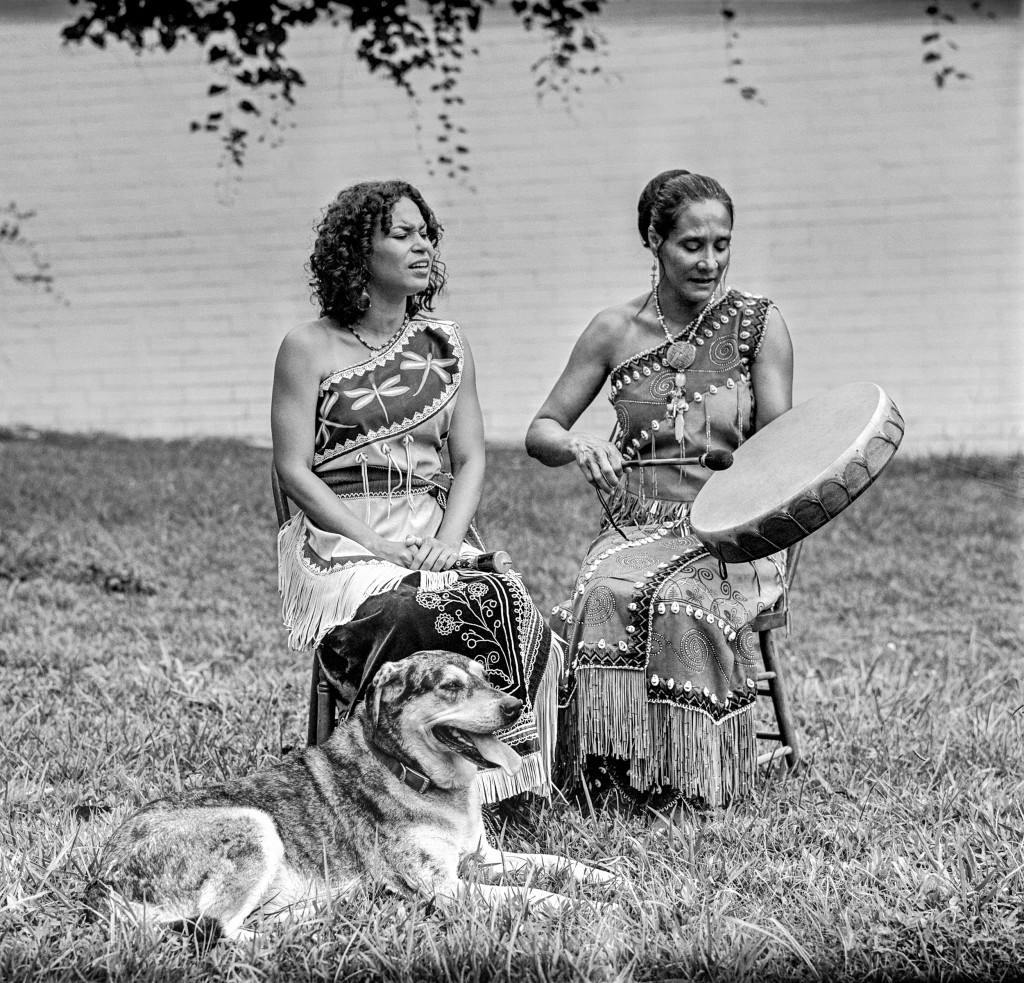 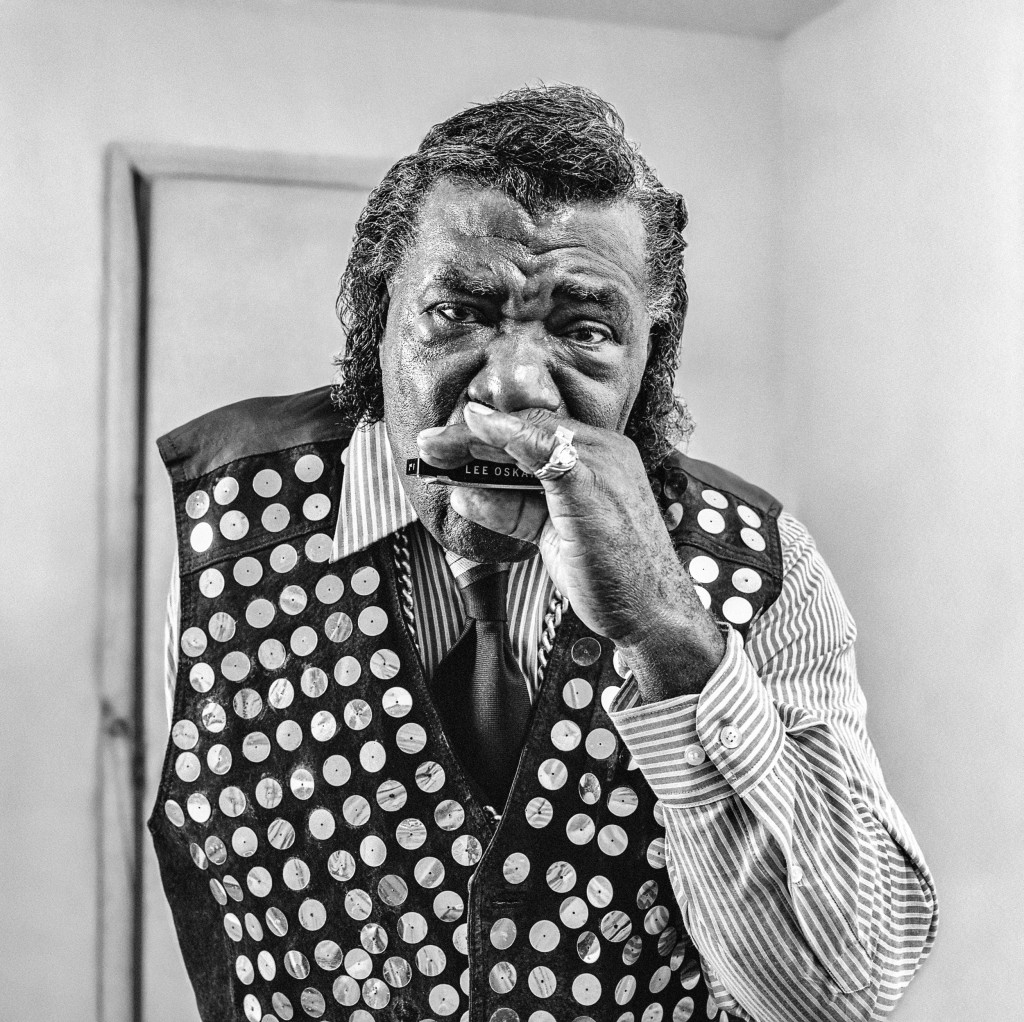 Neal Pattman, Athens, Georgia, 1995. “Neal loved his blues and would sing and play his harp anywhere. I always got a kick when he broke into a gospel song every time we were about to take off on a plane.” Photo courtesy Tim and Denise Duffy 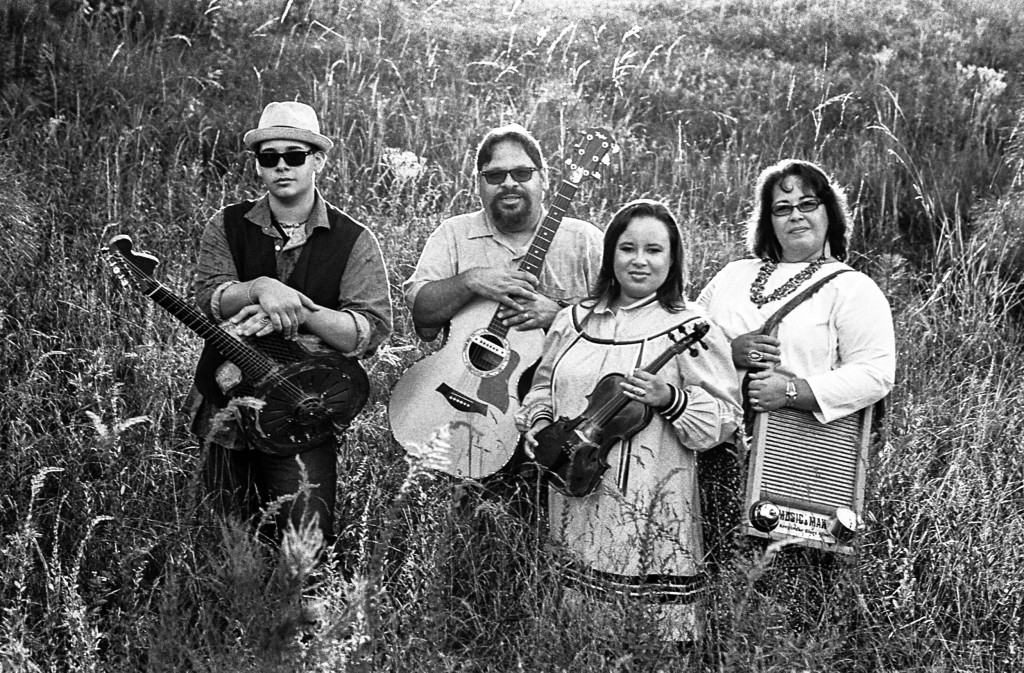 Lakota John, Layla, Papa John & Tonya Locklear, Lumberton, North Carolina, 2013. “John Lakota Locklear, born in 1997, grew up listening to his dad’s music collection. At 7 years old, he picked up the harmonica and at 9, his first guitar. Intrigued by the sound of the slide guitar, by 10 he had bought himself a glass slide, placed it on his pinky finger and has been sliding ever since.” Photo courtesy Tim and Denise Duffy 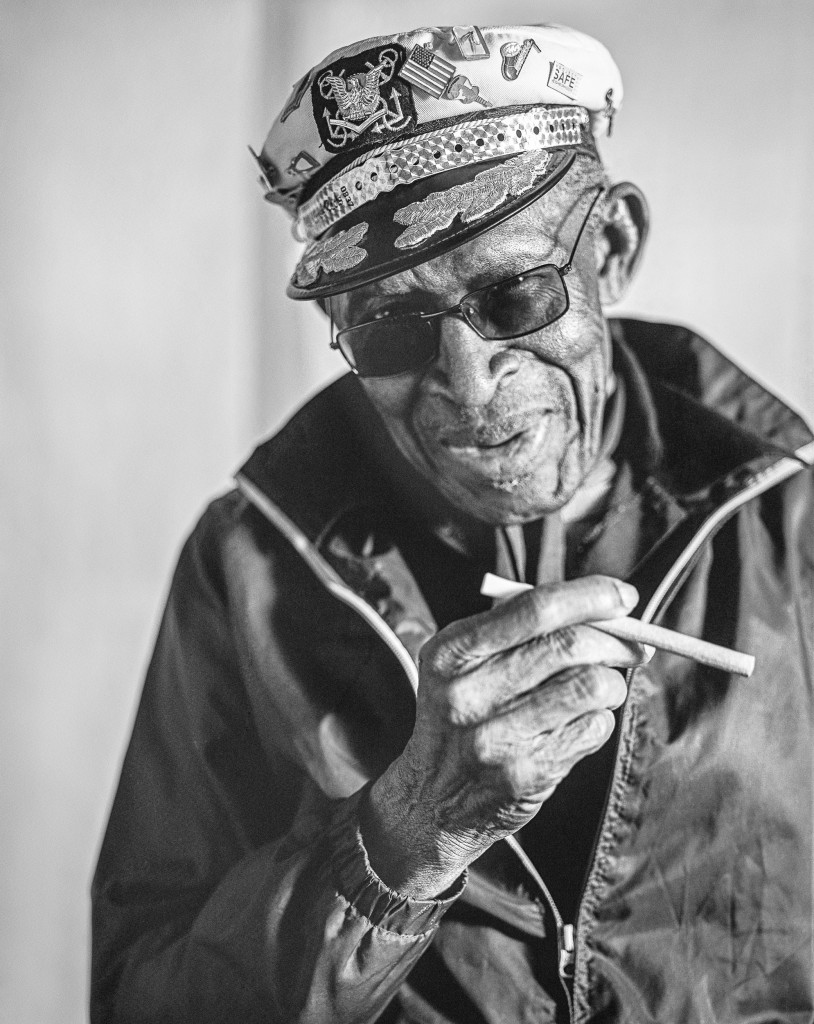 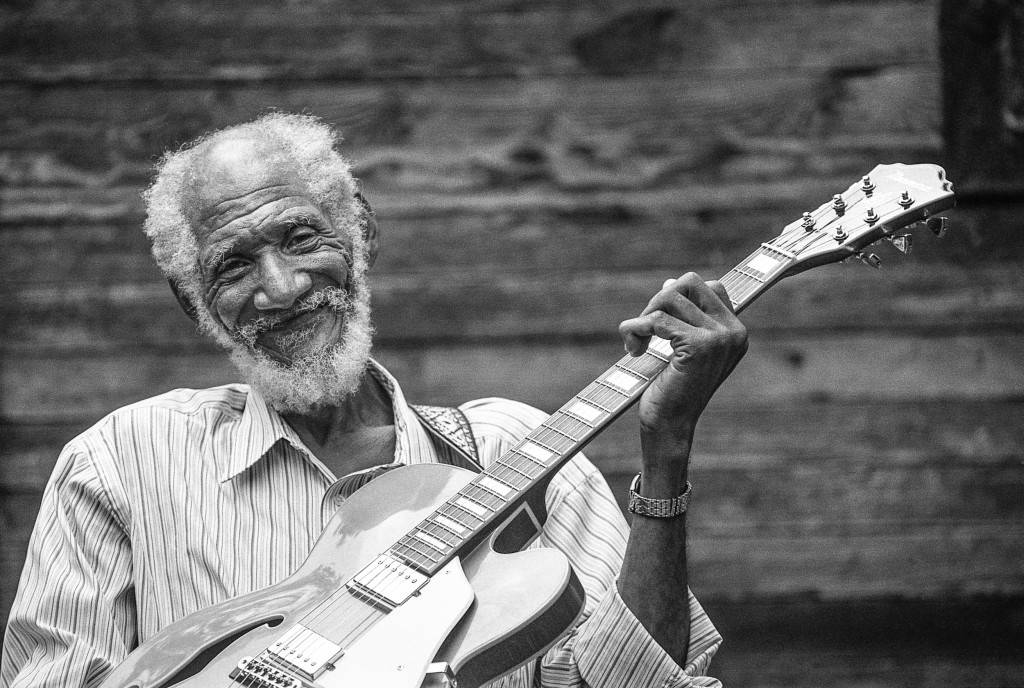 Dr. G.B. Burt (Grover Burt), Birmingham, Alabama, 2009. “Dr. Burt loved being with people and never stopped spreading joy. He even called us from his deathbed in Detroit, hoping we could find him a gig nearby.” Photo courtesy Tim and Denise Duffy 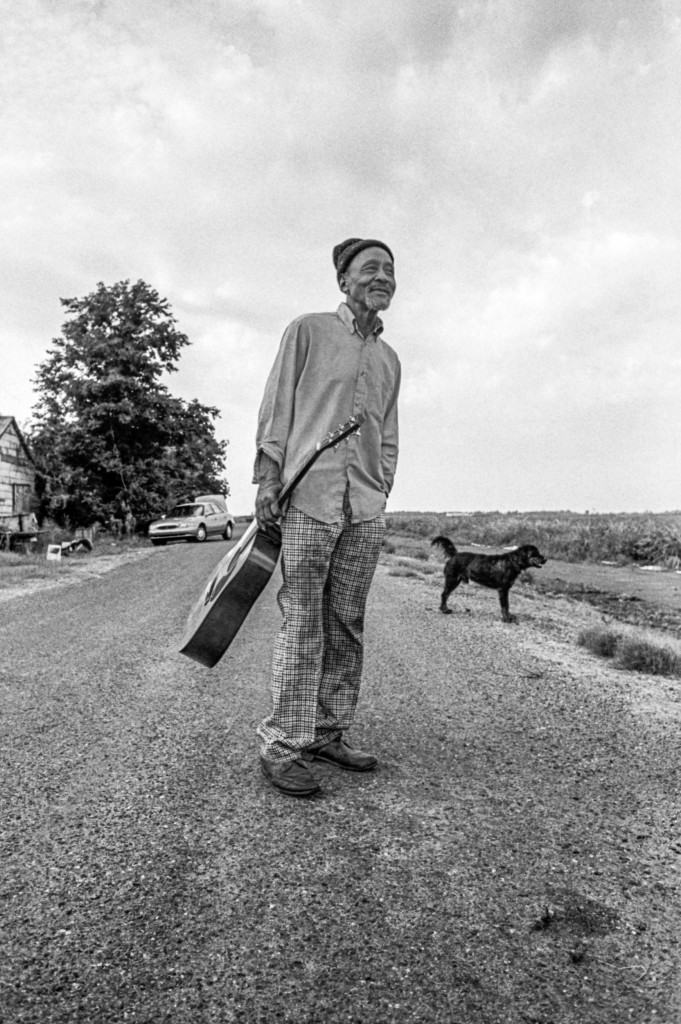 John Lee Cole, Bobo, Mississippi, 2001. “Joe lived outside of Clarksdale, Mississippi, in a tiny town called Bobo. His home was an old shack with one light bulb. To me, Joe Lee represents the thousands of unknown Southern artists whose work is only known to their families and communities, and I was lucky to get a glimpse of this man.” Photo courtesy Tim and Denise Duffy 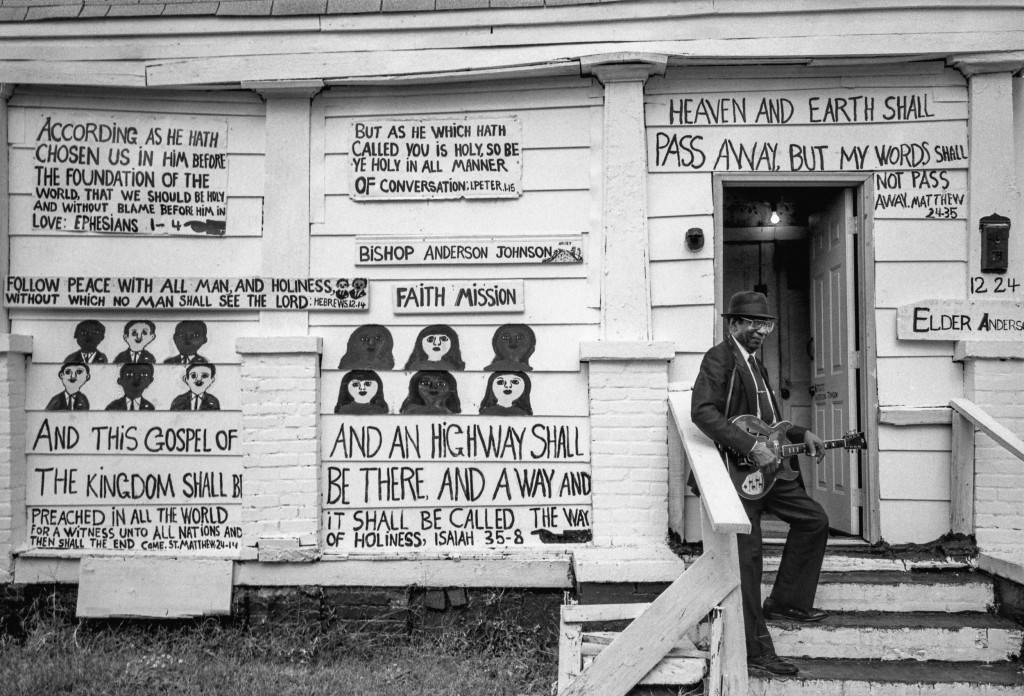 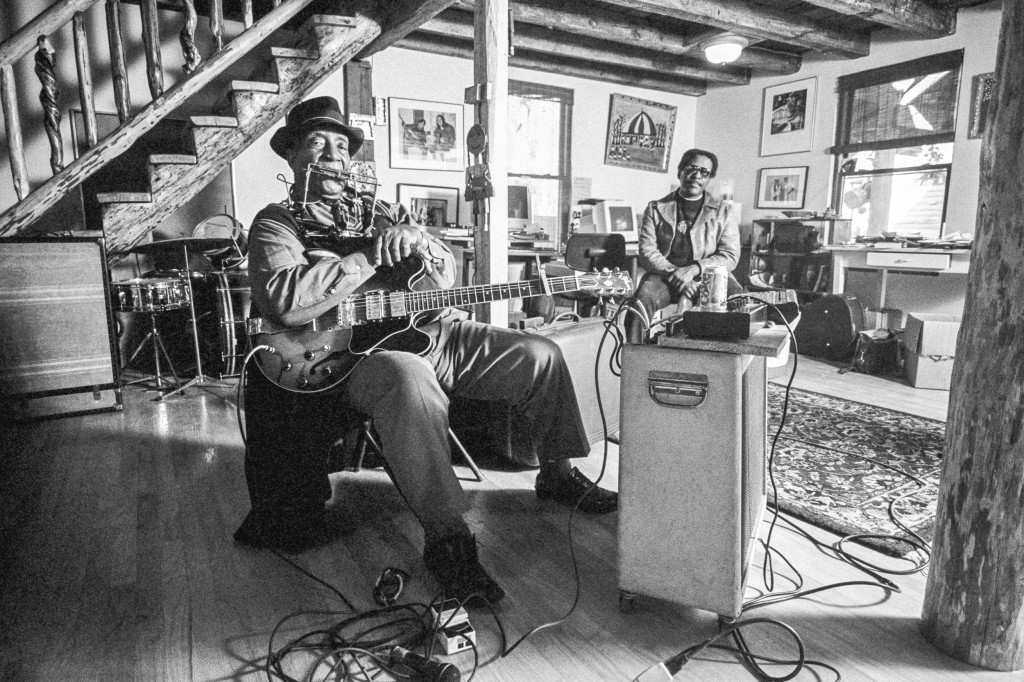 Mr. Frank Edwards & Cool John Ferguson, Hillsborough, North Carolina, 2002. “Mr. Frank Edwards bought his first guitar at age 12. His father was a ‘Terrible Christian’ and forbade him to play and smashed his instrument. Frank left home that day; he was 14 years old, moved to St. Augustine, Florida and never saw his old man again…This photo was taken after he recorded his last song; three hours later he died at 93 years of age of a heart attack near Greenville, South Carolina, en route to his home in Atlanta, Georgia.” Photo courtesy Tim and Denise Duffy 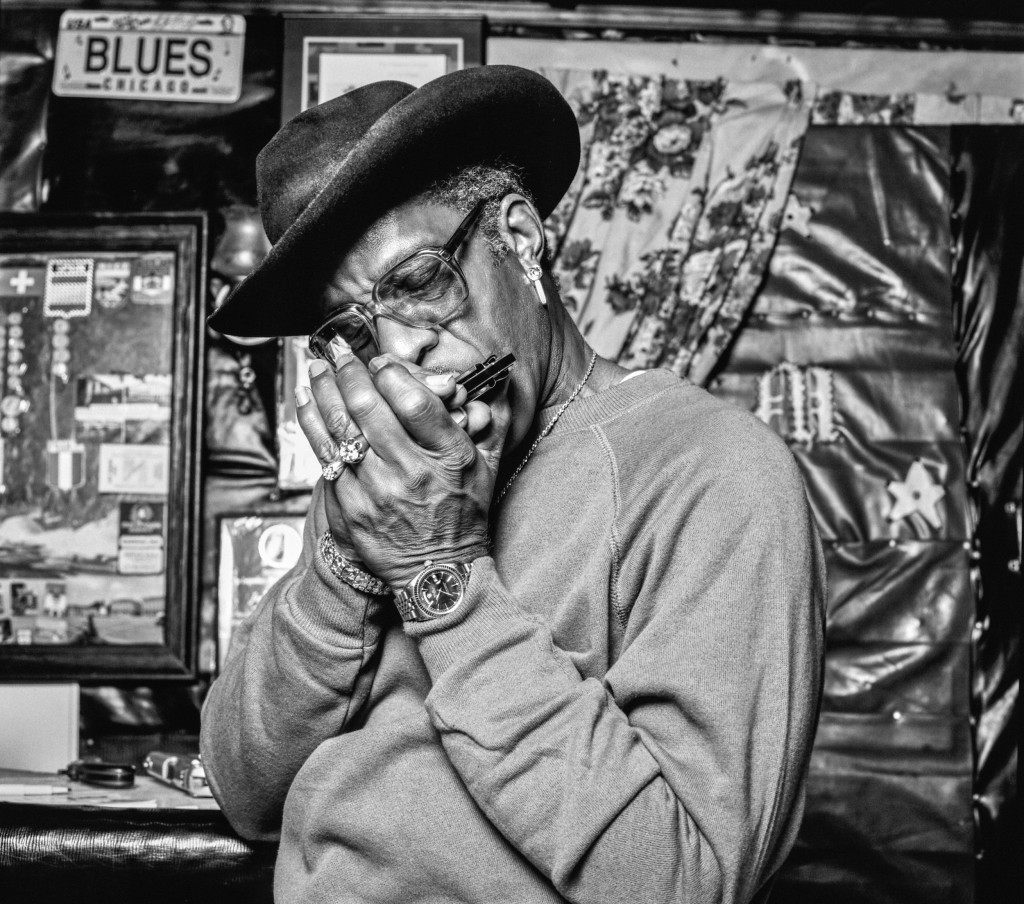 Jerry “Boogie” McCain, Gadsden, Alabama, 1994. “Denise and I met ‘Boogie’ in 1995 and we made an acoustic record in a nearby hotel room. When we finished the session, I asked Jerry, ‘After so many decades of bad record deals, what would make you happy?’ He replied, “I want a $10,000 advance and I will make a GREAT electric blues record.’ I shelved our humble recording and in 1999, I arranged a deal with Cello Recordings. Jerry got his advance…and he created the greatest album of his career, “This Stuff Just Kills Me.'” Photo courtesy Tim and Denise Duffy

Editor’s note: This piece was updated on October 17.

Left: Tim Duffy has spent decades photographing blues musicians who work with his nonprofit, the Music Maker Relief Foundation. His photos and stories, along with those of his wife Denise, are collected in the new book "We Are the Music Makers: Preserving the Soul of American Music." The photographs are currently on view at the ArtsCenter in Carrboro, North Carolina, until Oct. 31, and will be at the B.B. King Museum in Indianola, Mississippi, from Oct. 23 until Nov. 20th. Photo courtesy Tim and Denise Duffy