Beaton, the creator of the massively popular webcomic “Hark! A Vagrant,” has a new collection out this week — “Step Aside, Pops” — where a clingy Superman and an annoyed Lois Lane rub shoulders with some of history’s unsung heroes, such as Dr. Sara Josephine Baker and her contributions to public health care. While some of her comics have tackled feminist commentary, she’ll still take the time to draw a version of Batman galavanting in a cowboy hat and chaps. “Is that low hanging fruit? Don’t mind if I do,” one caption reads elsewhere in the book.

The NewsHour talked with the Canadian cartoonist about her first children’s book, how she selects her subjects and why there’s humor to be found in some of history’s saddest tales.

How have your comics evolved since you started publishing them on the Web years ago?

They started out being this six-panel gag, six-to-eight panel. And then they started to get longer than that, and they started to become less traditional comic strip forms sometimes. I started some long form ones in “Step Aside, Pops” because I was just sort of breaking loose from the rigid structure that I had before. I got tired of it and wanted to try something new. But then, when I tackle a historical or literary topic I used to just make one comic and now I tend to make, like, six, because I think it adds a bit more depth to the comics that I’m making.

In terms of how you drew your figures, is there any particular evolution there? 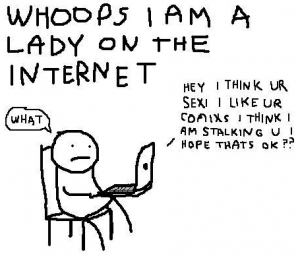 I’ve just become a better artist over time. I look at my older stuff and I’m like, “yuck.” But then, everyone thinks that way about their older stuff.

How do you balance the humor with historical figures that are not as well known? In “Step Aside Pops,” I think of Archduke Ferdinand Maximilian and Benito Juárez, which I thought was awesome because I didn’t expect the book to have Mexican history.

There’s a bit of a formula there to it. If I do something I know not a lot of people know that much about, you’re going to see more strips initially that have to deal with their exposition. They still have a joke in it. I have to let the audience know who I’m talking about and when it is and a little bit of a background. And then, over the course of a few strips, they kind of get to know the characters a bit and you can put in more nuanced ones at the end. You only got, like, six strips to do it, so it’s a bit of a math equation sometimes. 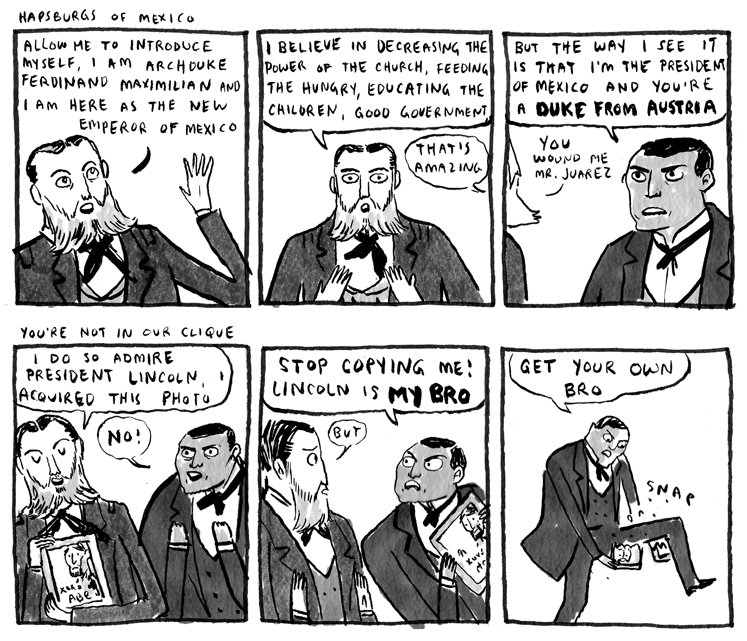 I try to understand my audience comprises of people who don’t know anything about it. It’s not like I can phone it in. I have to know what I’m talking about, but I also have to respect that everybody’s going to know exactly what I’m talking about. And also because I work on the Internet largely and because it is the Internet’s stage, even if people don’t know, it’s so easy to find the information really quickly. And I think that’s part of the fun in my comics for a lot of people. It’s like, “I didn’t know about this person, and I looked it up, and I read about it, and I read the comics again and they made more sense.”

I didn’t know the history of [Frédéric] Chopin and [Franz] Liszt themselves, and while the punch line still landed, after going back and researching myself, there was still other humor I hadn’t realized that was there.

That’s a lot of fun, to be able to do that. I mean, if I wasn’t making comics I’d probably still be working in museums. That’s all about public education, so not too far away. 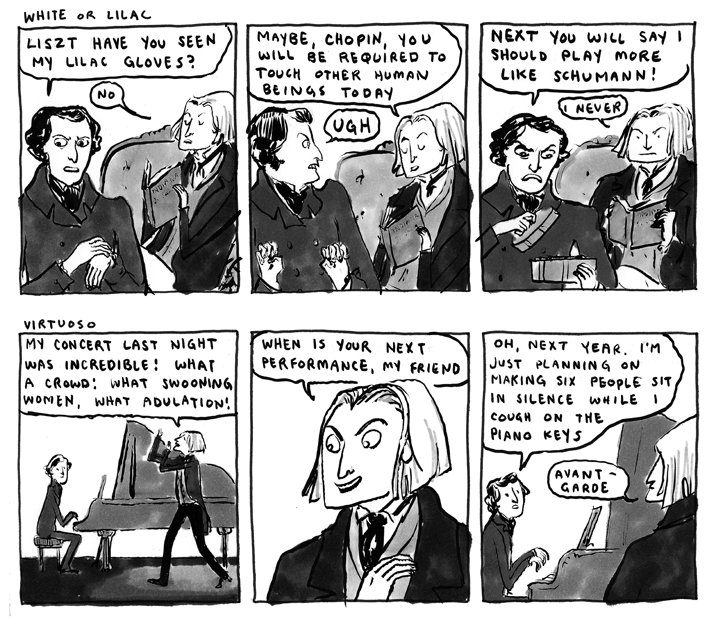 How’d you make that jump then? What prompted you to do comics and make history funny?

It all started when I was in university. I was studying history and making comics for the school paper and there was just kind of a reflection of what I was reading every day. The comics online, “Hark! A Vagrant,” really started when I was working at the Maritime Museum in British Columbia. And when you are an avid history or literature nerd, I think there’s a lot of joy in getting to know the things that you’re studying and finding humor in it. You always find people who are big fans of Lord Byron, or something. That’s not just because of his writing, it’s because of his personality. There’s always a sort of personal connection there. And it’s really not hard to get there when you approach it from that kind of personal perspective.

Was it difficult to find the humor in Ida B. Wells, who had to weather so many trials and tribulations?

The big powerful white guys, they’re easy to take down and nobody really cares if you take them down a notch with, like, a jab, because they’re powerful white dudes with a lot of money, and it’s not really gonna hurt their reputation. But for someone like Ida B. Wells, it’s so hard, there’s kind of really nothing funny about it. You don’t want to make a comic that makes fun of her, that’s horrible. I can make a comic about [Thomas] Jefferson and make fun of him, and that’s okay. But he was the president, he’s fine. Ida struggled a lot and is a real hero of mine. So in the comics about her, it’s a different kind of humor that you employ. 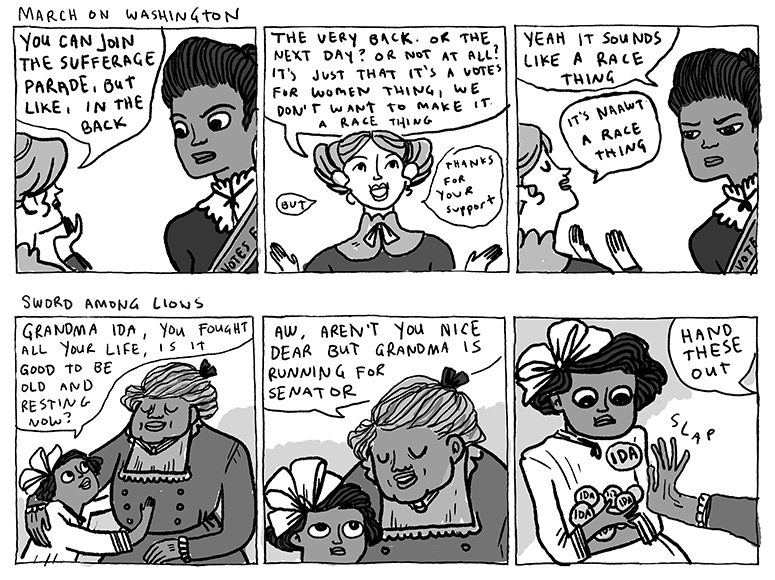 I love that your comics punch up. They don’t punch down. Has there been any subject that was difficult to write for other reasons? I’m thinking “Sexy Batman” or some of the other sillier stuff.

“Sexy Batman,” that was just a lark. We were playing a drawing game with a couple other friends and we kept drawing sexy Batman. He’s just in that pose, where you can see your chest and your butt at the same time, the pose they’re always putting ladies in in superhero comics. I like having a mix, I wouldn’t want it all to be serious.

Oh yeah, because children are just a different audience. They’re very smart and equally smart as adults, but they just don’t have the same points of reference. They’re experiencing the world for the first time, their humor doesn’t rely on wit and nostalgia and reference and things like that the way that we employ as adults. But if you talk down to them, they know it. You’re trying to reach them on their level, which is very serious, very smart, very aware of everything on the page. They soak it all in, all the detail. And I just wanted to make something that would make them laugh.

Another book with Scholastic. I finished two books this year, and two are being published, so it’s been a really busy year. That’s probably the hardest thing to navigate for me right now, is taking on other projects while maintaining my online presence because I don’t like it when too long goes by and there’s no update, and I don’t think readers do either. But then at the same time, it takes up to a week to make a comic sometimes, especially if it’s one of the research-heavy ones. They don’t look like much, I feel like people often describe them as — they look like scribbles, but then they’re good! But they take a long time. And if you’re working on something else, you’re like, well, I don’t have a week to make a comic. I have to keep doing the things I’m doing.

I feel like even throughout this year, you tried to maintain that communication with your audience.

Yeah, I don’t want to disappear. I’ve seen people do that. It’s not that people forget about you, but I just can’t step away from the thing that created me.

That’s true with webcomics, about people just dropping off.

Yeah, it happens. and with webcomics, it’s not like someone hands you a check every week and says good job. It’s all at the whim of whoever’s reading. And you can build a business as a webcomic, but then sometimes people get married, they have kids, they got lives and bills to pay, and you can understand why the comic sometimes drop off like that. It’s a difficult thing to maintain.

Kate Beaton will be a special guest at the Small Press Expo in North Bethesda, Md. this weekend.