Celebrations across the globe honor Shakespeare 400 years after his death

Four hundred years after his death, which occurred on this day in 1616, fans of William Shakespeare are finding myriad ways to be or not to be celebrating his life.

In Shakespeare’s hometown, Stratford-upon-Avon, in Warwickshire, approximately 100 miles northeast of London, thousands wearing Shakespeare face masks and Elizabethan costumes paraded and toured the 16th century house where he was born in 1564.

It was in this house where he started a family, but left to London for stardom. It was also this market town to which he returned for retirement.

In London, President Barack Obama topped off his final day in London at the Globe Theater, a replica of the circular, open-air playhouse Shakespeare designed in 1599 before it burned in 1613 just yards away.

Obama watched the theater’s Globe to Globe troupe present a 10-minute portion of Hamlet, amid the group’s two-year tour, performing across 200 countries including in Kabul, Afghanistan and a Syrian refugee camp in Jordan.

Play your part! Mark the 400th anniversary of the Bard of Avon's death with a soliloquy in Tweets. #Shakespeare400 https://t.co/21pTpYZCv4

Online, NPR’s blog “the salt” compiled a series of articles examining the link between food and the ubiquitous storyteller. One reveals what archaeologists found when they excavated his original theaters: evidence of grapes, figs, chickens and oysters. Another breaks down how he used food as racy code.

In Shakespeare’s 37 plays, more than 1,200 characters speak more than 880,000 words to each other. Here at PBS NewsHour we compiled a data scientist’s visual representation of how complex some of his plays are based on how often characters interact. 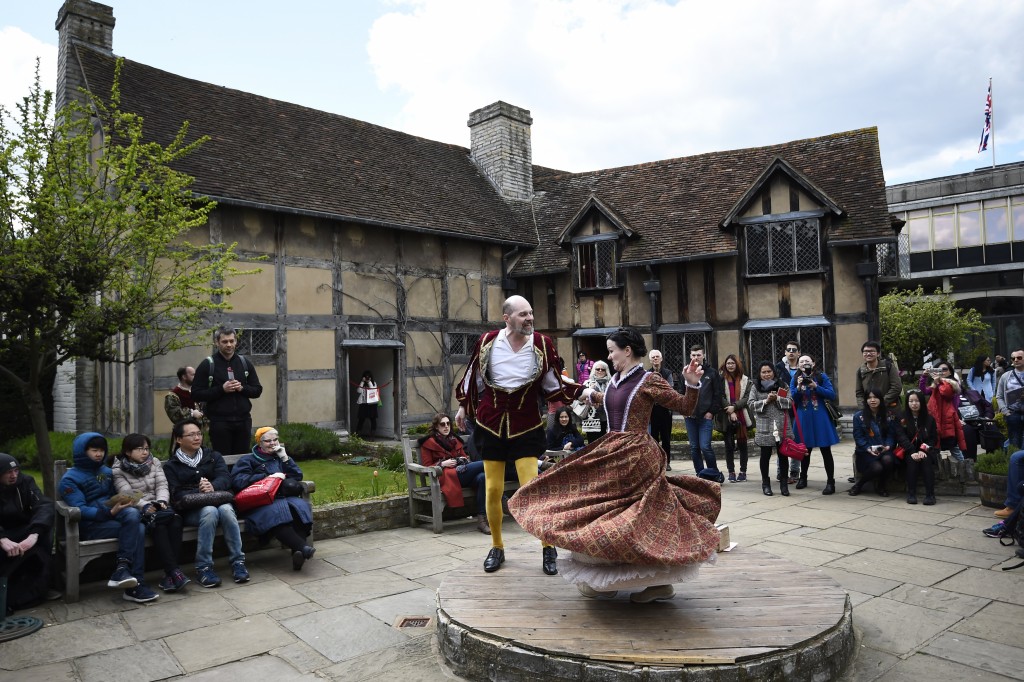 Tourists watch actors perform at the house where William Shakespeare was born during celebrations to mark the 400th anniversary of the playwright’s death in Stratford-Upon-Avon, Britain, April 23, 2016. Photo by Dylan Martinez/Reuters

Nature’s arts blog speculates how celestial dramas that coincided with his lifetime may have influenced his plays. Smithsonian resurfaced an old posting that differentiates between current English accents and Shakespearean ones. There’s also this short list of cliches with roots from Shakespeare’s plays including break the ice and kill with kindness.

And the New York Times has an irresistible long read and interactive full of anecdotes such as how his name was sometimes spelled “Shakspeare, or Shagspere, or Shaxpere, or Shaxberd,” because Elizabethan spelling was notoriously variable.

What’s your favorite Shakespeare play? Share your views in the comments below.

Left: People hold up face masks with William Shakespeare's portrait during celebrations to mark the 400th anniversary of the playwright's death in the city of his birth, Stratford-Upon-Avon, Britain, April 23, 2016. Dylan Martinez/Reuters