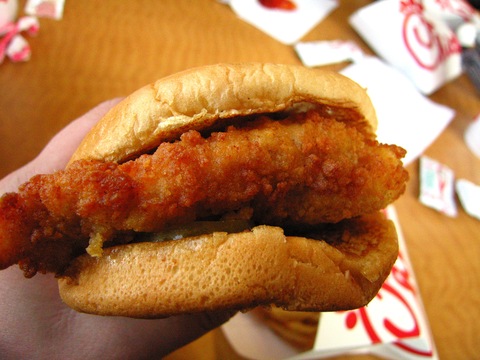 Chick-fil-A President Don Cathy’s July 16 comments on gay marriage to a Christian news service, the Baptist Press, have turned up the heat on the Georgia-based fast-food chain.

Chick-fil-A has since been at the center of an ideological tug-of-war, with various company heads and civic leaders weighing in. This week the two sides are staging opposing events at Chick-fil-A restaurants across the country.

For more on how the chicken sandwich came to be seen as a political symbol, Hari Sreenivasan spoke with Rene Lynch of the Los Angeles Times. Listen:

Had dinner at Chick-fil-A, then I married a man. There was something about that sandwich….Steve Martin
show your support for Chick-Fil-A and free speech. Visit Chick-Fil-A today. http://tinyurl.com/dy3rsz7Gov. Mike Huckabee
National Same Sex Kiss Day at Chick Fil A | FacebookSign Up Facebook helps you connect and share with the people in your life.
Stopped by Chick-fil-A in The Woodlands to support a great business.Sarah Palin
Good news for Gonzo: The Jim Henson Company rejects Chick-Fil-A’s opposition to marriage equality – 2012-Jul-23The love between a Weirdo and a chicken is a beautiful thing. And no less significant than the love that comes between two humans of the …
Support Chick fil-A today! Sound off below if …Facebook
Bought #chickfila for the office this afternoon. Never tasted so good. http://pic.twitter.com/26LhOknCRep. Jeff Duncan