Today marks the day in 1821 when John Keats, the Romantic poet who waxed on Grecian urns and nightingales, succumbed to tuberculosis. He was only 25. John was thought to have contracted the infection while taking care of his critically ill brother Tom, who died in 1819.

Born in 1795, John was the oldest of four boys (one who died as an infant) and one girl. His father, Thomas, ran a successful horse stable, which was owned by the father of his wife, Frances. On April 16, 1804, when John was only 9 years old, Thomas was thrown from a horse and killed. Frances left her children to marry again — a union that resulted in a legal separation only a few years later.

As a young boy, John was educated at the Enfield School, an institution known for providing a solid education in mathematics, science, literature, history, Greek, Latin and other sundry topics. Unlike the more prestigious Eton School, however, Enfield was did not prepare its students for going on to university. John was a voracious reader of the classics, history, mythology and even travel books, but in the classroom he was an indifferent student.

John was a voracious reader of the classics, history, mythology and even travel books, but in the classroom he was an indifferent student.

John’s legal guardian, a tea merchant named Richard Abbey, convinced him to pursue a career in medicine. At age 15, he was apprenticed to work for Thomas Hammond, an apothecary-surgeon, for a period of five years at the cost of £210 (about $17,600 in 2016 U.S. dollars) for his room and board. Under Hammond’s tutelage, John learned how to compound medicines, set fractured bones, deliver babies, pull teeth and, because the four body humors still reigned as the principal underpinning of disease causation, how to open veins, apply leeches and “blood-let.”

At the time, the British medical field had a tripartite hierarchy of power.

At the top of the pyramid were physicians who held medical degrees from Oxford, Cambridge or Edinburgh. They were considered to be the most learned, typically took care of well-heeled patients and, as a result, charged higher fees.

For the so-called “lower classes,” both in the large cities and in the countryside, surgeons and apothecaries were consulted for health care. Surgeons were formally examined and held licenses to practice, but the snooty physicians considered them mere craftsmen. To this day, British surgeons are addressed with the title of “Mister” rather than “Doctor.” These professionals were initially members of the Guild of Barbers and Surgeons but separated from the barbers in 1745 after forming the Corporation of Surgeons. In 1800, they established the Royal College of Surgeons. 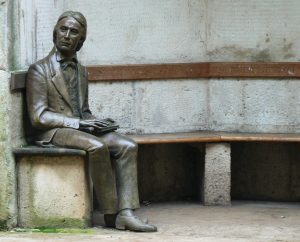 A statue of John Keats outside Guy’s Hospital in London. Photo by Flickr user under_volcano, via Creative Commons.

Apothecaries, on the other hand, typically compounded and dispensed medications for physicians, surgeons and patients. After the passage of an Act of Parliament in 1815, however, apothecaries were licensed to diagnose and treat patients as a “general practitioner,” upon completion of a compulsory apprenticeship and passing a set of formal examinations administered by the Society of Apothecaries.

An important part of Keats’ medical training, aside from his apprenticeship with Hammond, was his work as a “house pupil” at the famed Guy’s Hospital in London. There, he saw patients suffering from the worst maladies and assisted on horrific surgical operations, performed as quickly as possible not only to prevent massive bleeding, shock, and death, but also because ether anesthesia would not be introduced until 1846.

Keats’ first surgical instructor was the famed Sir Astley Paston Cooper, one of Britain’s leading surgeons. Sadly for Keats’ education, he was soon yanked from Cooper’s operating theatre and assigned to work under William Lucas Jr., a hack widely known as the worst surgeon in the hospital, if not all of London.

In 1816, Keats passed his apothecary’s examinations and was licensed to practice. Before long, however, Keats told his guardian that he was abandoning medicine to pursue his poetic muse in earnest. Happily for English literature, he would never see a single patient as a doctor. 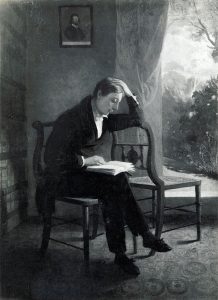 A portrait of John Keats. Photo by Getty/Bettmann/Contributor.

Struggling to survive as a poet, Keats competed with such marquee names as Percy Bysshe Shelley and Lord Byron (who once likened Keats’ poems as a form of intellectual “Onanism,” a Biblically polite way of referring to the poems as a form of mental masturbation). Keats also endured a slew of bad literary reviews in several high profile publications. Despite such sniping, Keats’ poetry improved with each passing month. Unfortunately by 1820, Keats began to experience shortness of breath and lung hemorrhages, a result of his tuberculosis. His doctors advised him to take an ocean voyage (a common prescription doctors made for sickly, young men in the 19th century) and escape the dank, cold British winter.

On September 20, 1820, Keats and his close friend Joseph Severn sailed for Rome. It was a voyage plagued by rough waters and reports of a cholera outbreak in England. After spending 10 days in quarantine, he was placed under the care of a well-intentioned but incompetent physician named James Clark. Poor Dr. Clark has often been blamed for John Keats’s early demise but given the state of medicine in this era, it mattered little who John consulted. That said, the therapy Keats endured remains shocking: starvation by means of a diet consisting of one anchovy and a piece of toast per day, multiple bleedings and too much laudanum (tincture of opium).

Some have claimed that John Keats died of disappointment over the poor literary reception his poems received. Indeed, upon learning of Keats’ demise, the snobbish Lord Byron wrote his publisher John Murray in April of 1821:

Is it true, what Shelley writes me, that poor John Keats died at Rome of the Quarterly Review? [a dismissive 1818 review, written by John Wilson Croker, of Keats’ Endymion] I am very sorry for it, though I think he took the wrong line as a poet, and was spoilt by Cockneyfying, and Suburbing, and versifying Tooke’s Pantheon and Lempriere’s Dictionary.–I know by experience that a savage review is Hemlock to a sucking author—and the one on me (which produced the English bards &c.) knocked me down—but I got up again.—instead of bursting a blood-vessel—I drank three bottles of claret—and began an answer …

Poor reviews aside, Keats’ consumption did what untreated, galloping tuberculosis often does: it consumed and destroyed his lungs. With respect to the bright red bleeding from his lungs, Keats observed, “I know the color of that blood. I cannot be deceived in that color. That drop of blood is my death warrant. I must die.” As the young man hemorrhaged more and more arterial blood into his lungs, he basically suffocated and shuffled off this mortal coil on February 23, 1821. Although his corporeal life ended that day, his immortality as one of England’s leading poets is extended every time a student reads and recites one of his beautiful odes.

Tragic though his premature death was, there can be no doubt that his choice to abandon clinical practice for poetry did not harm or hold back medical progress in the slightest degree. Any sawbones could open a vein or prescribe a powerful emetic. But only one man contained the literary power to compose a line like this:

Beauty is truth, truth beauty—that is all
Ye know on earth, and all you need to know

Left: A memorial stone to poet John Keats, (1795-1821) is seen in Rome's "Non Catholic Cemetery." John Keats, one of England's most famous poets, died early in 1820 of tuberculosis at the age of 25, after travelling to Italy in search of a better climate to help cure him of the disease. Photo by Dan Kitwood/Getty Images.