What the Confederate flag’s design says about its legacy

As the Confederate flag was lowered from outside South Carolina’s statehouse Friday morning, a crowd burst out in cheers, song and chants of “USA! USA!”

The emotional reactions surrounding the flag are a marker of the its often-controversial legacy and its importance as a symbol of the South — one with roots in design, military history and psychology.

The flag’s design is no coincidence, according to Ted Kaye, a vexillologist with the Portland Flag Association and member of the design committee for the new flag of Fiji. The Confederacy literally wrote the book on flag design, Kaye said.

In 1861, the National Flag Committee of the Confederate States of America wrote its official guidelines for flag design:

A flag should be simple, readily made, and capable of being made up in bunting; it should be different from the flag of any other country, place or people; it should be significant; it should be readily distinguishable at a distance; the colors should be well contrasted and durable; and lastly, and not the least important point, it should be effective and handsome.

“It encapsulates in one splendid sentence nearly all the basic principles of flag design,” Kaye said. 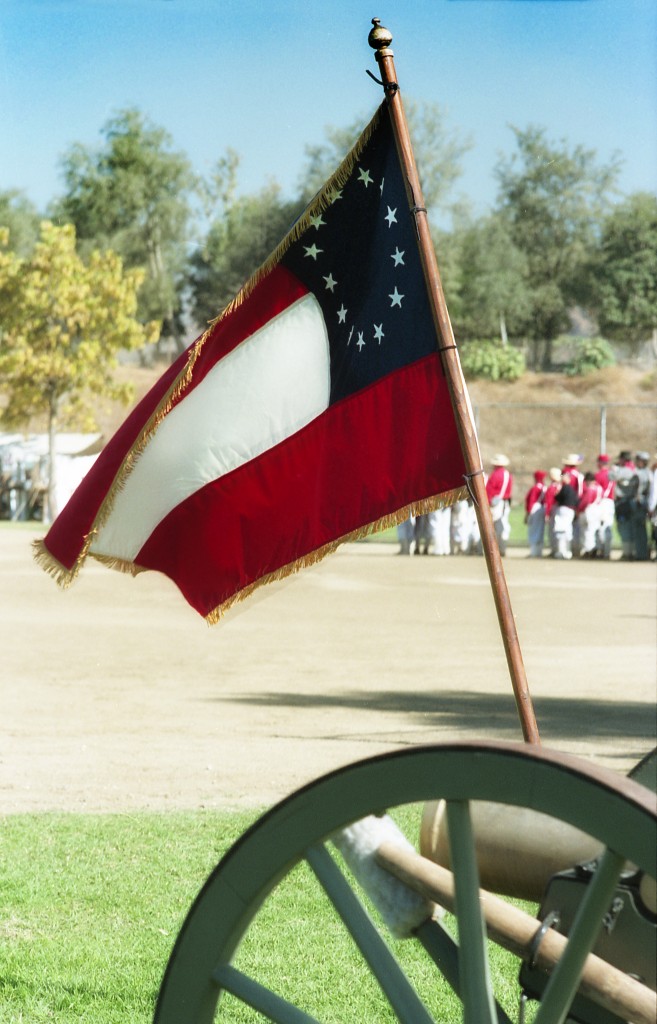 A re-creation of the first Confederate flag, called the “Stars and Bars,” appears at a battle re-enactment in Los Angeles. Photo by Getty Images

In 1861, a contest called on designers to create the Confederacy’s national flag. The winning design, dubbed the “Stars and Bars,” had three horizontal stripes, two red and one white, and a blue box containing white stars in the upper lefthand corner. That flag caused confusion on the battlefield for its close resemblance to the Union flag, Kaye said.

The runner-up in the contest was a square flag known as the Confederacy battle flag, which showed a blue cross and white stars against a red background, and was entirely bordered in white. The Confederacy placed this design in the upper lefthand corner of a white flag and adopted it as the new official flag in 1863; it draped the casket of Confederate general Stonewall Jackson. But it looked too much like a flag of surrender, so the Confederacy added a vertical red bar on the righthand side, adopting a third national flag in 1865.

Meanwhile, the longest-lasting symbol of the Confederacy originated in the docked ships of a limited Confederate navy, Kaye said. Confederate ships at port frequently hung a naval jack that consisted of the battle flag without the white border.

“Now it has become the symbol of racism. Since America cannot deal with the underlying sources of continued racism, it has chosen to deal with the symbol.” — scholar David Levi Strauss

Surprisingly, this is the one that stuck, Kaye said.

“It’s amusing to flag folks to see people [fly] a rectangular version of the Confederate battle flag without a white outline and say, ‘This is the Confederate flag, I honor my heritage, this is the one that I fly,’ when really, it’s an obscure, second-tier flag associated with the Confederacy,” he said.

The flag employs many of Kaye’s elements for good flag design: it’s simple, uses 2-3 colors, contains no letter or seals, is meaningful — employing images or colors that relate to what it symbolizes — and is distinctive from other flags.

Flag design can speak powerfully to a nation’s relationship to another nation, Kaye said. The flag of Liberia, adopted in 1847 after ex-U.S. slaves founded the nation, closely resembles the American flag, showing the link between the two countries. “The connection between the Liberian flag and the U.S. flag is a purposeful one,” he said. 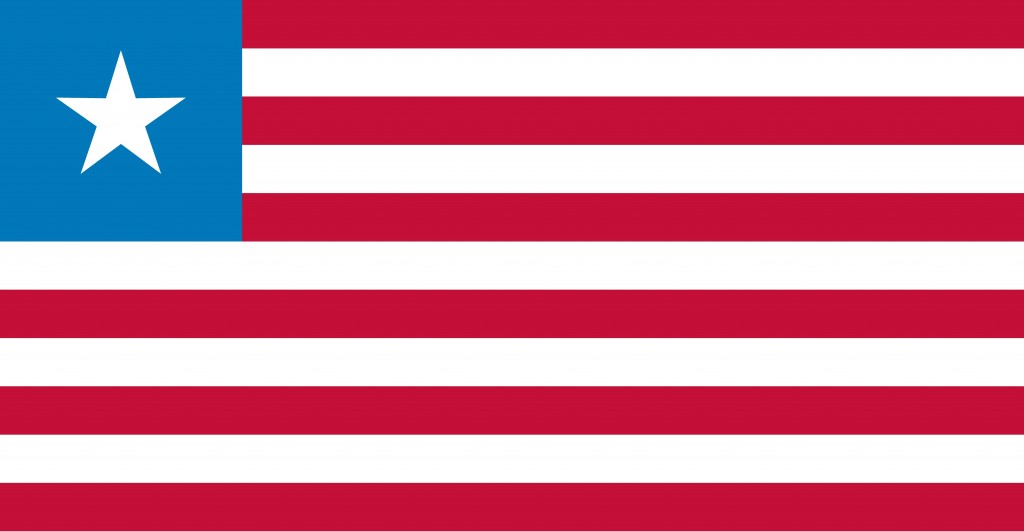 By design, the flag of Liberia, which declared independence in 1847, closely resembles elements from the U.S. flag. Photo by Getty Images

This manipulation of the design elements that form the American flag is part of what makes the Confederate flag so powerful, according to Claire Potter, co-director of The Humanities Action Lab at The New School. “It takes all the symbolism of the American national flag and reconfigures it,” she said. “Those who choose to hang the Confederate flag don’t actually have to give up their identity as Americans. They’re reconfiguring their identity as Americans.”

Modern use of the flag began with a shift in the Democratic Party, when the States’ Rights Democratic Party, commonly called the Dixiecrats, separated from the former in protest of its support for the civil rights movement, Kaye said. It was also used by several hate groups such as the Ku Klux Klan, forming a close association between the flag and opposition to desegregation, Kaye said. In 1961, South Carolina raised the flag on the grounds of its state Capitol to commemorate 100 years since the beginning of the Civil War.

The flag has appeared widely throughout popular Southern culture, offending many who say the link between the Confederate flag and a legacy of racial hatred is inextricable. Georgetown University law professor Paul Butler said the flag cannot be dissociated from racism.

“The only reason that we debate here whether Confederate iconography should be displayed is that racism has warped our sense of reality,” he said. “Some symbols are too strong to extrapolate.”

In spite of its history, affinity and familiarity cause many people to describe their attachment to the flag in terms of their heritage, Kaye said. “The problem is, when you fly a flag, no one knows which meaning you’re attributing to it,” he said.

David Levi Strauss, chair of the MFA program in art criticism and writing at the School of Visual Arts, said via email that the flag’s meaning has shifted throughout the years, but the causes of racial strife remain.

“In the case of the Confederate Flag, it became the symbol of the Old South for many who saluted it ‘with affection, reverence, and undying remembrance,’” he wrote. “Now it has become the symbol of racism. Since America cannot deal with the underlying sources of continued racism, it has chosen to deal with the symbol.”

Left: There were a handful of iterations of the Confederate battle flag, but this version is the most widely used today. Photo by Getty Images