Q&A: In Zadie Smith’s ‘NW,’ Some Harsh Truths About Friendship 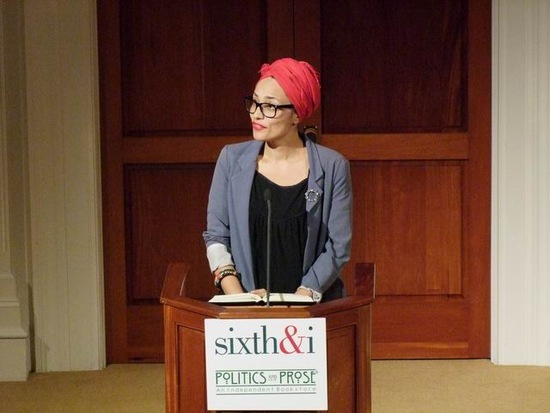 Zadie Smith reads from her new novel at the Sixth & I Synagogue in Washington, D.C., earlier this month. Photo by Bruce Guthrie.

British author Zadie Smith’s first novel “White Teeth” was a contemporary ode to the British family. In other works such as “The Autograph Man” and “On Beauty,” Smith examined fame and academia, respectively, with her same perceptive insight and wry humor. In her latest novel, “NW,” Smith explores the joys and problems of a modern friendship between two women in North London. Decidedly less radiant than some of her earlier works, “NW” delivers the reader some harsh truths about city living and growing older.

We recently spoke to Smith while she was in Washington, D.C., on her book tour:

ZADIE SMITH: You know, it just comes to the point where you’re going to write a new novel. I just kind of let things percolate. I had this idea about a girl coming to the door. That’s where it began, something that had been happening in my neighborhood. And it grew from there. I just wanted to write a book about contemporary life.

ART BEAT: As far as having a less traditional narrative, compared to “White Teeth” and some of your other works, it’s a lot more similar to a stream-of-consciousness style. Why did you make that choice? Was it something to do with the themes?

ZADIE SMITH: I really didn’t think of it as a stream of consciousness. When people use that, it’s kind of just a term they use for anything that looks slightly different on the page. Stream of consciousness is something like Virginia Woolf, for example, which is quite different from what I was trying to do. I just wanted each character to have their story told in a form that was appropriate to them, basically. So I knew it was going to be different for each character, and I knew the book was going to be a lot about time and how time passes. I wanted to try and find a way that expressed how it actually feels to be in time, rather than the way we’re used to seeing it parceled out in novels and films. So it was always a conscious decision to make it feel more real.

ART BEAT: A lot of people compare some of your work to British authors of the past. “White Teeth” was compared to Dickens, and I’ve read in some places a comparison of “NW” to writing from Virginia Woolf. How do feel your work fits into that British canon, and in what ways are you responding to the canon? Or is it not something you’re thinking about?

ZADIE SMITH: You know, part of it’s not conscious. I was just educated very traditionally. I have a lot of the British canon in my mind and in my ear and in my mouth because that’s the way we were taught. An English degree when I was at college began at “Beowulf” and ended at about 1960. You’re quite deeply embedded in the language of your country, which I like. I guess some mix of that influence plus your own sensibility, whatever that is, makes up your own voice one way or another.

ART BEAT: How are you thinking about place in this work? It’s named “NW” after a place, but how did that function for the characters?

ART BEAT: Did you feel like the characters were not really ever able to escape where they came from?

ZADIE SMITH: The thing is, it’s not a place that I would want to escape from. It’s not escape, it’s just that, it’s a really nice area. It’s just about the idea that people aren’t given an equality of opportunity. It’s not that the neighborhood is some cursed place. All over the world at the moment, if you’re born in a certain situation and with a certain amount of money, the odds are stacked against you, and that’s interesting wherever you live.

ART BEAT: Can you talk a bit about the friendship of Leah and Natalie/Keisha?

ZADIE SMITH: I guess I’m just interested in women’s friendships generally. It always seems to me, and this is just my pet theory, that women are kind of at the sharp end of capitalism one way or another. Mainly because they buy everything. In a practical sense, women buy most things. They buy most things for the house. The amount of money a man spends on his hair compared to the amount a woman spends on her hair. Something about the logic of that comparison, constantly shopping for the best thing, I think it’s also in women’s lives. They’re always comparing — to friends, to famous people, to other people. An obsessive act of comparison. I wanted to write about that.

ART BEAT: By the end of the novel I wasn’t quite sure they were friends. After Natalie’s narrative in particular, she struck me as shallow.

ZADIE SMITH: Yeah, that’s partly true. A lot of women, when they’re young, feel they have very good friends, and find later on that friendship is complicated. It’s easy to be friends when everyone’s 18. It gets harder the older you get, as you make different life choices, as people say in America. A lot of women’s friendships begin to founder. I was interested in why that was, why it’s not possible for a woman to see her friend living differently and just think, “Oh, she lives differently.”

ART BEAT: Well, why do you think that happens?

ZADIE SMITH: The arena of women’s lives is somewhat more intimate. There’s something about — the most obvious example is, it always interested me. Say a man goes out with a very fabulous, famous woman, splits up with her. Afterward, that man is attractive to other women. Now that’s an example of the way women’s minds work. If a woman goes out with an incredibly attractive man and they break up, that woman is not more attractive to men. It’s completely irrelevant to them. They don’t work that way, whereas women’s desire operates through people. It’s important to them that they are dating the man who once was married to Madonna or whatever. That matters to women. And that’s interesting. It’s just a different way, it’s a very socialized kind of desire. It’s not actually directed at the person it’s meant to be directed at. It’s directed at the other woman.

ART BEAT: Another issue that’s complicated for both of these women is pregnancy. Can you talk a little bit more about that, what you were thinking about?

ZADIE SMITH: It was really just from 10 years of sitting around listening to women. In every country I went to, living in America, living in England, they’re incredibly anxious about that topic, in a way that I didn’t think they had been 50 years ago….This thing that was about to happen to them was so utterly alien and shocking. And when it did happen, it seemed to them like it was a miracle above all other miracles. And yet people have been doing it for [a long] time and more.

ART BEAT: So were you thinking about feminism in relation to that?

ZADIE SMITH: Yes, it’s interesting to me. I was brought up with the sense that I was absolutely no different from my brothers. I went to college thinking I was absolutely no different from the men in college. But that’s not true. I’m fundamentally different. The problem was not being able to understand difference and equality at the same time. It’s something that we can’t seem to comprehend. You can’t state difference and also state equality. We have to state sameness to understand equality. It’s a mistake.

Listen to the question and answer portion of the reading for more of Smith’s thoughts on writing: