COVID is back for an encore in New Orleans, and musicians face an uncertain future

NEW ORLEANS — There’s a big question in the Big Easy: How do you let the good times roll when the coronavirus is back for an encore with the delta variant?

New Orleans is part of a state with the dubious distinction of having one of the highest case counts per capita and the lowest vaccination rates in the country. It is also known for surviving catastrophes like Hurricane Katrina with the help of its legendary music and musicians.

Music is finally pouring out of windows and doors in the French Quarter again, even with the recent surge. On a recent Saturday night, enthusiastic tourists stand in line outside Preservation Hall with their plastic “go-cups.” Now, however, they must also carry proof of vaccination or a negative COVID test result, along with their tickets and face masks.

Musicians like 94-year-old Lawrence Cotton, the oldest working musician in New Orleans, hasn’t tickled the ivories for the masses at Preservation Hall, a New Orleans landmark, in over a year.

“It’s been a long time. I miss playing at the Hall,” Cotton told the PBS NewsHour. “Everyone wants to play with me. We have a lot of fun. It’s a legendary experience. ”

The renowned Preservation Hall has been belting out traditional New Orleans jazz since 1961. Like most venues, the music hall was dark for more than a year. There was a deafening silence in the French Quarter. Those in the city’s music industry are determined it won’t happen again, even with a surge.

“We don’t feel that live music has to suddenly stop or that we should retreat into lockdown,” said Greg Lucas, executive director of the Preservation Hall Foundation. “All of the musicians that play at Preservation Hall are now vaccinated. The vaccine is the answer, and we have extended that requirement to any attendee at the Hall.”

After being walloped by the first three waves of coronavirus, the hall was one of the first music venues to reopen with self-imposed stricter guidelines and smaller crowds. Preservation Hall usually entertains 170,000 people annually.

Even with the new vaccine mandates, at his age, Cotton is understandably uneasy. The piano legend has gone from regularly playing for packed audiences on stages and at churches to playing for a handful of neighbors on his front porch. He recently played at the Satchmo Fest outdoors in late July but didn’t like what he saw. The World War II veteran knows how to survive.

“Very few people had their masks on. We were in and out of the public, up close to somebody and then not close at all. We kept our masks on. People were letting loose and acting like nothing was happening, ” he said. “A lot of people are not serious about the situation. They think it’s a game, I guess. It’s not. It’s very serious.”

In late July, DJ Soul Sister, whose real name is Melissa Weber, is credited for being the first to implement a vaccine mandate at her popular New Orleans dance parties, where she spins classic funk. “My parties are about joy. I don’t want any cloud of death over my parties anymore,” she said.

Days later, Tipitina’s, the Maple Leaf Bar, and d.b.a. — three iconic New Orleans venues — announced that they would require proof of vaccination, too.

With the new guidelines and rising numbers, Arsène DeLay nervously returned to the stage at the Maple Leaf on July 30th. Due to the pandemic, she lost 32 gigs and a European tour. The performer, songwriter, and community activist admittedly had the jitters, even with a 10-foot barrier separating her from the crowd. The music club is known for its tin roof and rowdy dance floor. Nevertheless, she was comforted by the new protocols and vaccine mandate.

DeLay’s musical heritage runs deep — she’s the niece of well-known siblings John and Lillian Boutté. Her family has been in New Orleans for 13 generations. But, even if the bands play on, the scars from the pandemic will remain.

Many cultural elders like Ellis Marsalis, the patriarch of New Orleans’ most famous musical family, died from COVID along with many other musicians in 2020. Marsalis is credited with teaching half of the city’s musicians. There may be new mitigation efforts, but DeLay, like many New Orleanians, is still focused on surviving.

“I’m literally in the midst of watching my culture die in real time. It’s pretty heavy. Our community took a hard hit. I wasn’t concerned about whether I was going to come back,” DeLay said. “I was more concerned about surviving it.” 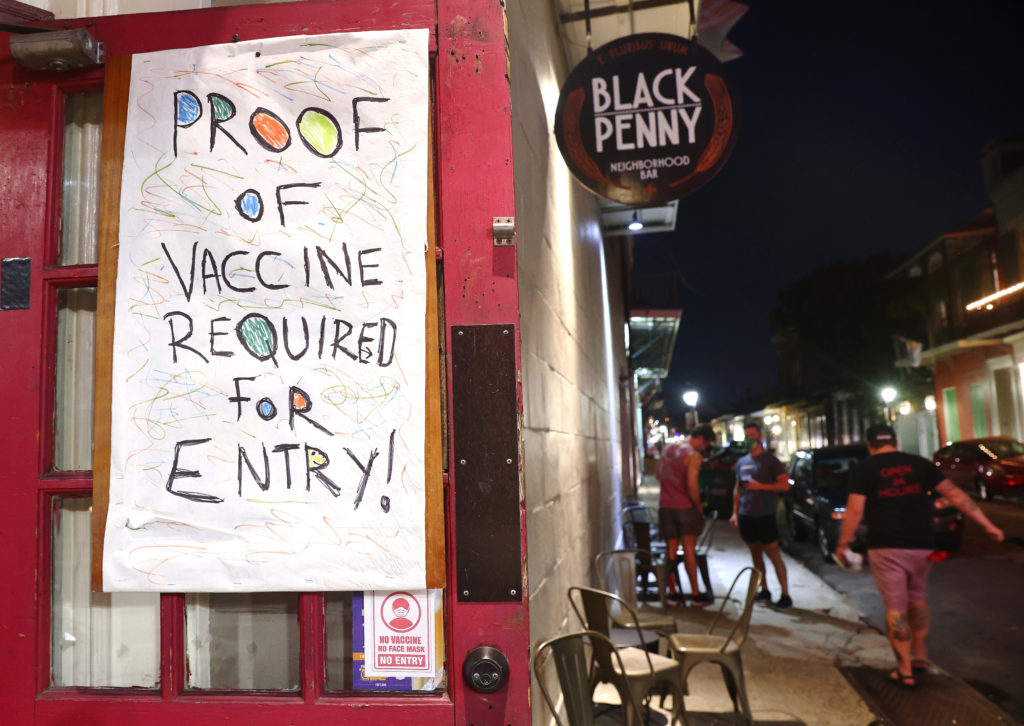 A sign reads “Proof Of Vaccine Required For Entry” at a bar in New Orleans, Louisiana. Starting Aug. 16, people are required to have proof of vaccination or a negative COVID-19 test to enter restaurants, bars, stadiums and certain other indoor locations in the city. Photo by Mario Tama/Getty Images

Even with the vaccine mandates, there are still cancellations of major shows. It has put New Orleans’ festival season, an engine of its economy, in peril. The latest blow comes as organizers pulled the plug for both the French Quarter Fest and the New Orleans Jazz & Heritage Festival for the second year in a row. The two music and food festivals have a combined estimated impact of more than $500 million annually.

It’s not just a blow for acts like The Rolling Stones, Stevie Nicks, and the Foo Fighters, but the many New Orleans artists who power Jazz Fest like Jon Batiste, Big Freedia, and Irma Thomas will feel it most.

Known as “The Soul Queen of New Orleans,” Thomas has played at Jazz Fest since 1975. She worries for the culture bearers of the city but feels restrictions are necessary. Thomas wonders how are they going to survive after losing their biggest gigs of the year. “A lot of the musicians don’t even qualify for unemployment because they’re self-employed. Sure, it’s going to hurt the pocketbooks, but by the same token, I rather have an empty pocketbook than be buried,” Thomas lamented during a recent interview with WWL-TV.

Craig Klein is also a fixture in New Orleans’ music community, playing Jazz Fest and Preservation Hall. However, the 60-year-old, known for his blaring trombone with the group Bonerama, won’t be playing at Jazz Fest either. During a recent interview, he was back on tour in Colorado and got a taste of what’s possible. With the delta variant, however, he said the cancellations are starting all over again.

“It felt good,” Klein said of the Colorado outdoor concert. “You can’t deny the feeling and the emotion of that ‘going back to normal’ feeling. In that moment, it felt great. The audience was into the music, and we, as musicians, were into the audience.”

Klein also noted, a bit remorsefully, “Of course I’m taking it day by day like everybody else. We can imagine what we think it might be, but I’m imagining that this tour will be a last hurrah for a bit.”

The latest surge doesn’t mean he’ll put down his horn. Klein has spent four decades in the local music scene, adapting and keeping a positive vibe during the city’s many ups and downs. In March during the pandemic, he was forced to accept his first-ever Grammy — for Best Regional Roots Music Album — as a member of The Nightcrawlers, virtually. While the music shutdown may have stifled his ability to capitalize on his newfound Grammy success, Klein used the time to take care of himself and work in the studio. He released a new jazz album, “Talkative Horns,” in honor of his fellow trombonist and friend Lucien Barbarin, who died in 2020 from cancer.

Amid all this new work, the trombonist described how losing 30 gigs a month was a hardship.

“With this pandemic, it totally shut the music down, and anybody making money playing music got shut down completely,” Klein said. “Our source of income dried up overnight,” adding that he had to file for unemployment, for the first time ever, to keep paying the bills.

The median musician earns only $21,300 annually from music-related sources, according to a 2018 survey conducted by the Music Industry Research Association (MIRA). In partnership with the Princeton University Survey Research Center and MusiCares, the organization surveyed about 1,230 musicians nationwide and found that their music incomes couldn’t meet their living costs.

New Orleanians love their music and their musicians and know how important it is to support them as guardians of their city’s rich heritage. During the pandemic, community organizations such as the Preservation Hall Legacy Emergency Relief Fund, Jazz and Heritage Music Relief Fund, Meals for Musicians, and the New Orleans Musicians’ Clinic, among others, offered relief funds and grants to musicians. The support helped many musicians make ends meet.

For some, though, the impact of the pandemic lingers. Musician Steve Witschel was playing again on the famed Bourbon Street until he was hospitalized with COVID in late July. The guitarist delayed getting vaccinated and was caught by the fourth wave. It’s a mistake he regrets. Before calling 911, he even made a farewell video to his family.

“The first night was scary,” Witschel said. “I was having trouble breathing, even on oxygen. I was laying there feeling like I’m not going to make it … I’m going to die here. That was lowest.”

With the delta variant surge, musicians like Witschel now know COVID is in the crowd. After 38 years in the industry, he’s just glad he survived to play again, though his lungs are badly damaged and he remains on oxygen.

“I should have taken it more seriously and done more to protect myself,” Witschel said. “I think that is what other people should be doing, too.”

Despite COVID striking a sour note in the city, Witschel hopes to keep the music going, saying he’ll play again, although it might not be on Bourbon Street or in the same capacity.

“I’m a musician till the day I die,” he said. “I’ll play somewhere, somehow.”

Left: A sign reads "You Must Show Your Vaccination Card To Enter." along with other signs posted in front of a bar in the French Quarter in New Orleans. Photo by Mario Tama/Getty Images