As polarized politics continue to rage in the Beltway, rural Virginia still has a place where Democrats, Republicans — and some Whigs — stand shoulder to shoulder.

The busts of the first 43 U.S. presidents, each standing at least 15 feet tall and weighing nearly 10 tons, are huddled on the property of Howard Hankins, a local developer who saved them from destruction.

“They all listen to me,” Hankins said of the past commanders-in-chief.

The concrete busts are the remnants of the now-defunct Presidents Park in Williamsburg, Virginia. The 10-acre, $10 million open-air museum, citing a lack of interest from visitors, closed in 2010.

When the park opened in 2004, it was apparently too hidden from passersby, partially obscured by a Days Inn hotel. It appeared the park’s designers failed to consider a vital real estate mantra: location, location, location.

Seeing value in the presidential busts, Hankins said he stepped in and paid about $50,000 to move them to his property 10 miles away.

“The eyes look like they’re staring at you, just gazing at you. It’s incredible how big they are and lifelike,” he said. 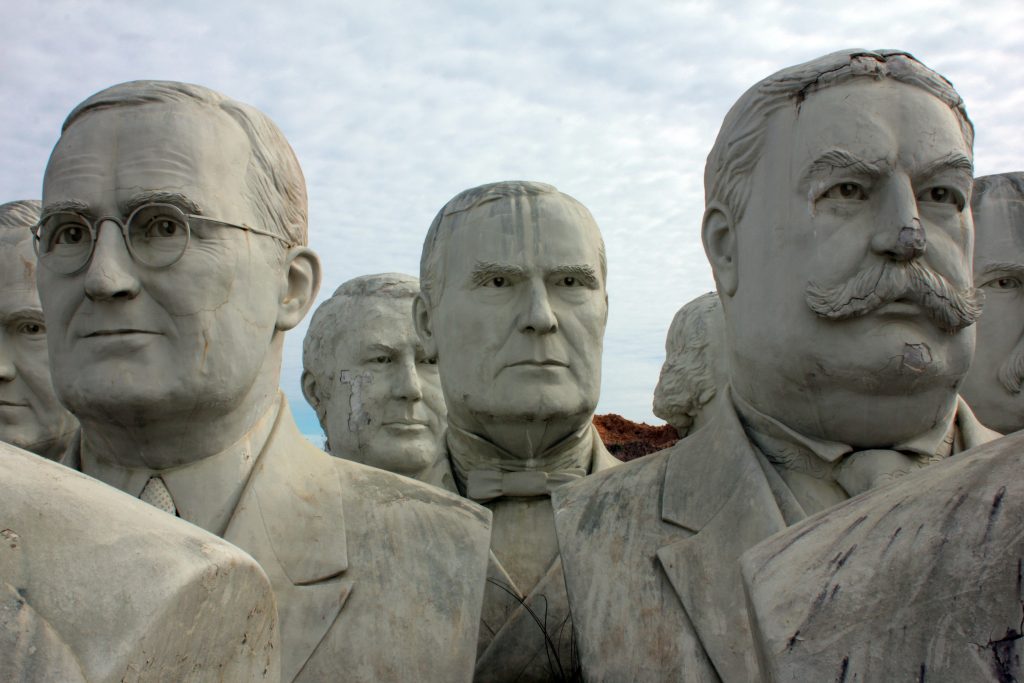 First, Hankins had to crack the back of the presidents’ hollow heads to attach a chain that linked the steel frames inside to a crane. Then, each bust was jostled loose from their spot in the park.

Originally, the busts were assembled from two pieces, welded at the middle of their necks. This meant many of the busts suffered neck breaks during the move, as the head started to separate from the shoulders.

Abraham Lincoln’s head suffered the worst damage. The chain attached to it snapped, Hankins said, and even though tires were laid out to cushion any impact, Lincoln was dropped on the back of his head.

The hole in Lincoln’s head is not meant as an allusion. 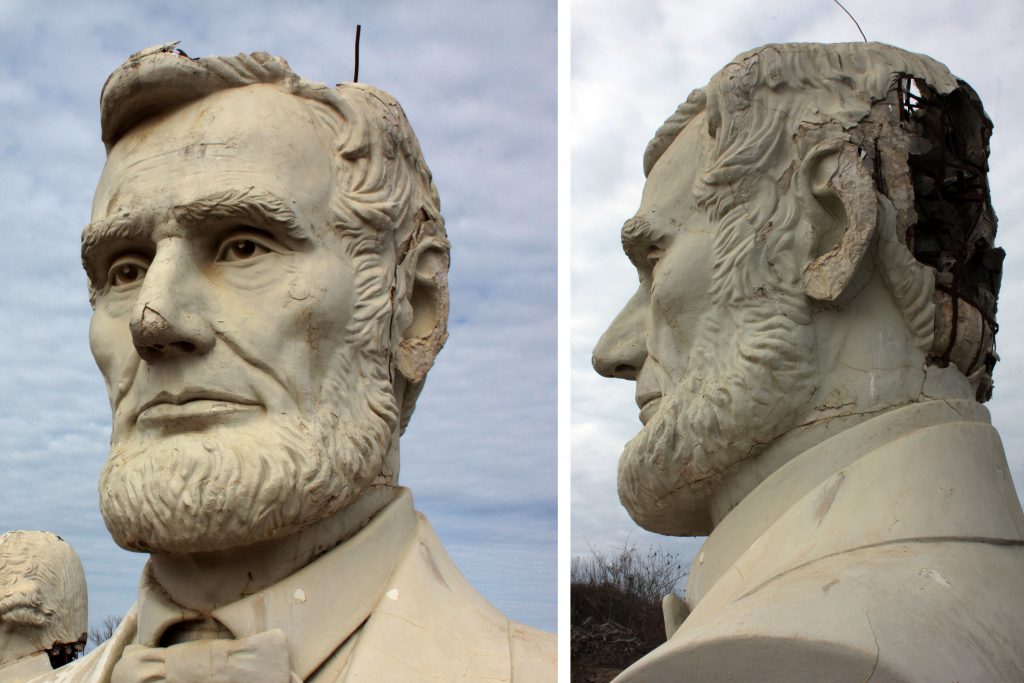 In all, Hankins said moving the busts to his 600-acre farm required several days of work.

Now, all 43 presidential busts reside on Hankin’s property in various states of ruin. The once-pristine, white paint coatings have lost out to the elements, cracked and ripped off from wind, sun exposure and rain.

The bust of George W. Bush, in particular, is pockmarked with peeled paint. John Tyler has a rotten right cheek. Theodore Roosevelt is missing his trademark pince-nez glasses. A hornet’s nest lives in one of Rutherford B. Hayes’ nostrils. 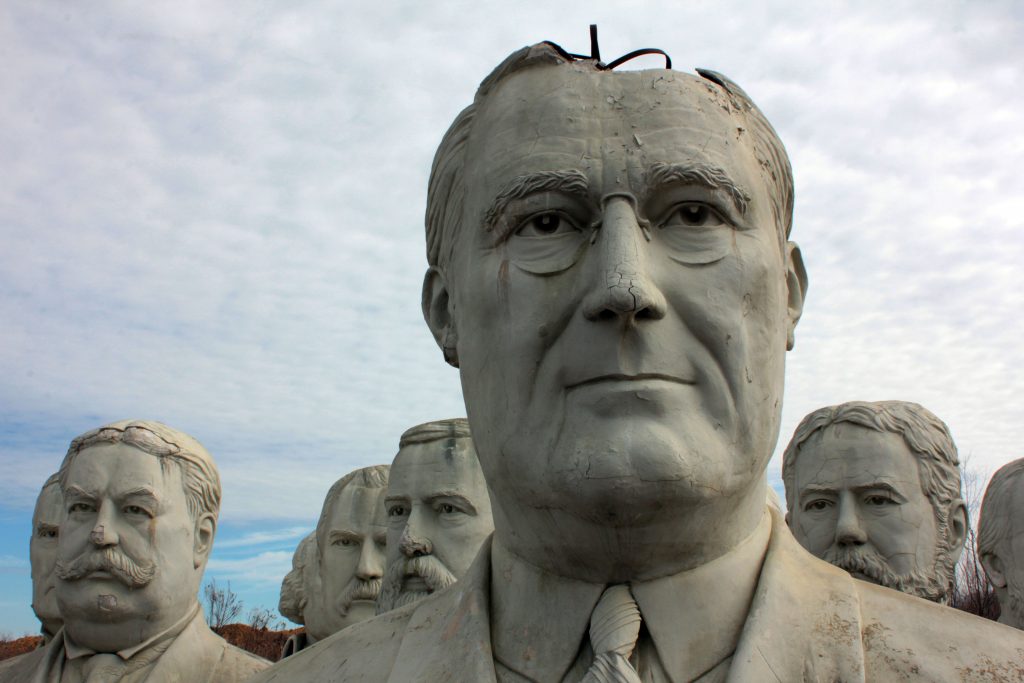 Hankins said it takes quite a bit of maintenance to keep the busts from total disrepair. With the help of a power washer, he cleans them when moss and mold start to cake the busts’ exteriors. He also touches them up now and then by replastering parts as needed. He recently repainted Andrew Jackson with a new coat of white paint.

If anything, Hankins said, the upkeep proves that the busts are repairable and could be removed to establish a different park.

A new park could “educate the kids from a young age up of the sacrifices these guys made,” he said.

Hankins is angling for a new group of investors to greenlight a new park for the busts, which would add presidents Nos. 44 and 45. A small model of a Barack Obama bust sits in a nearby shipping container that also houses old memorabilia from the old park. 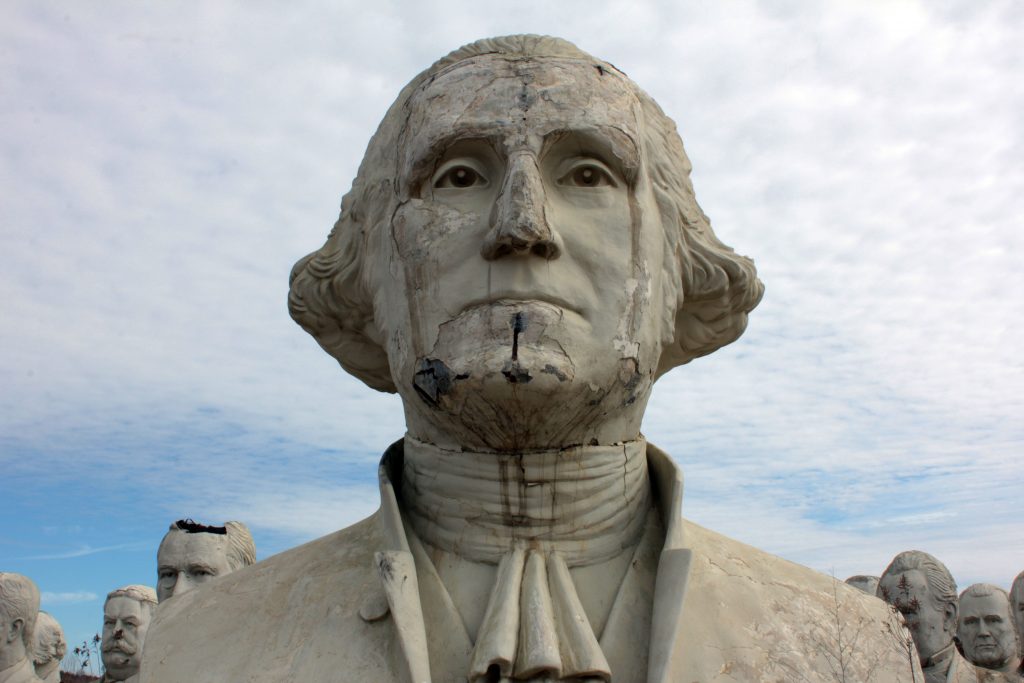 Currently, George Washington, along with Lincoln and Andrew Jackson, is prominently displayed in the field, with special deference for the country’s first president.

“I always go back to George Washington, I mean he founded everything and they came up with the ideas, and he could’ve been a monarch and he gave up that,” Hankins told the NewsHour. “Giving up that power he had was amazing and doing that fighting to free our country. What a guy,” he added.

Stuck in a field, the busts have become a makeshift destination for tourists. Hankins said up to 20 cars of people would come onto his property every weekend to take photos with the towering sculptures.

People from various parts of the country have also visited the spot, Hankins said, adding that he’s met folks as far-flung as Japan, Germany and Sweden.

Several cars drove up when the NewsHour crew was filming the busts, and all took photos. One woman had a selfie stick. Another person stood on John F. Kennedy’s shoulders for a photo.

For Hankins, every presidential bust — yes, even James Buchanan — is an entryway to understanding U.S. history.

“It’s amazing, the history of it all, I want to preserve all I can and share it,” he said.