The black silhouette of a girl’s profile appears. Her eyelash blinks up, down. A white tear escapes. Her hand brushes it away.

Huddled around an overhead projector, Julia Miller and Drew Dir are manipulating paper cutouts of eyelashes, a tear and a young girl’s hand. Miller and Dir are two of the artistic directors of Manual Cinema, which combines projections with puppets and live performance to create a surreal cinematic experience.

“Drew’s the tear and the head, and I’m the mouth and the hand,” Miller told Art Beat before a recent performance of their show “Lula del Ray” at Artisphere, an arts venue in Arlington, Virginia. “It’s this dialogue that we’re trying to accomplish together, this single action or series of actions.” 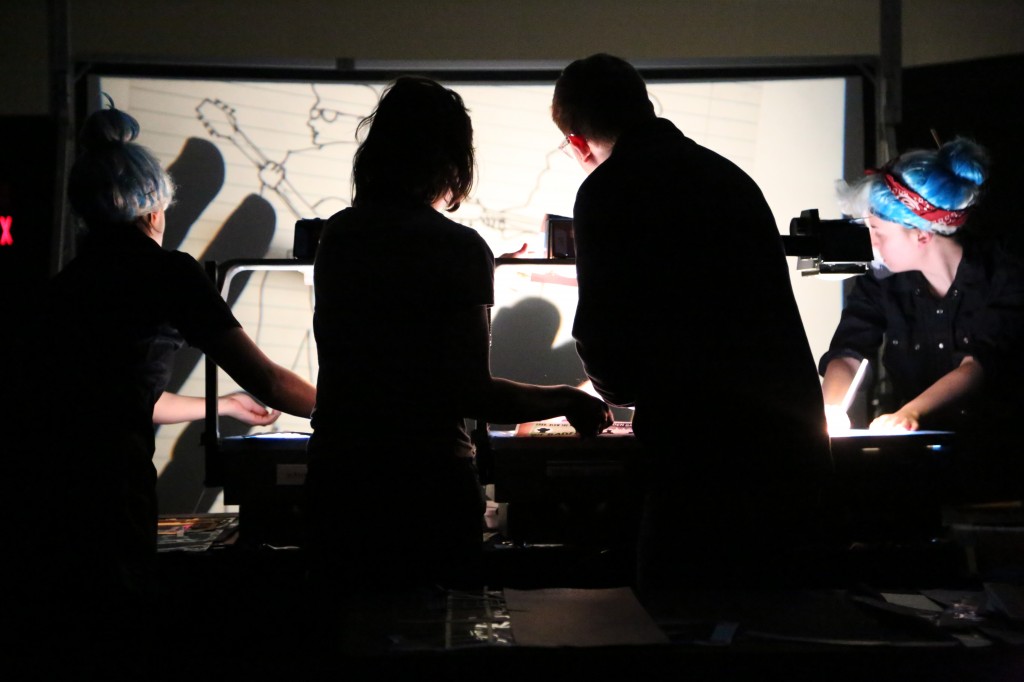 All four Manual Cinema puppeteers work together without exchanging a word to create a scene at a recent performance of their show, “Lula del Ray.” Photo by Eric Krupke/NewsHour

Calling Manual Cinema “shadow puppetry” doesn’t do it justice. The final product is projected on the largest screen, above the human and puppet action. If you never looked down, it would be like watching a film, which is exactly their intention. But the layered theatrical process of creating the film in real time is also visible on the stage below.

“Puppet by puppet, we animate every single frame to make it look like it’s a movie,” said Sarah Fornace, another co-artistic director.

The puppeteers cluster around the glow of three overhead projectors. They lift and lower black paper flaps to block the light from the bulbs, cutting between the projectors like cameras. 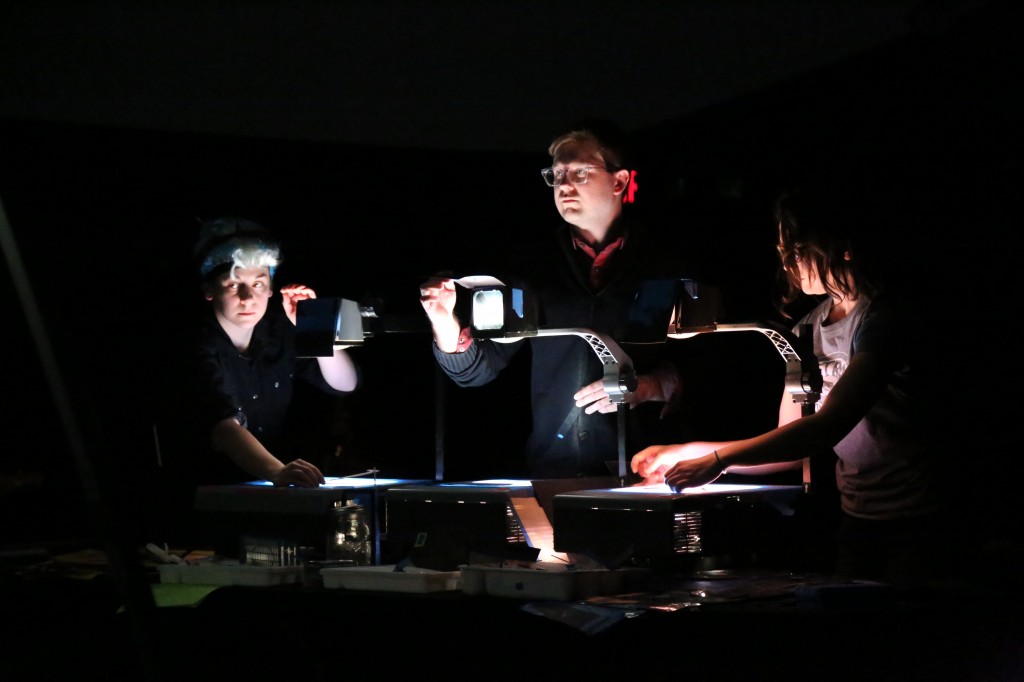 Julia Miller, left, and Drew Dir, center, manipulate the black flaps on their projectors to “cut” between scenes. Photo by Eric Krupke/NewsHour

Actors use the light cast from the projectors to create shadows on a smaller second screen. Since shadows can’t reveal facial expressions, the dip of a chin or the shrug of a shoulder convey the character’s emotions. 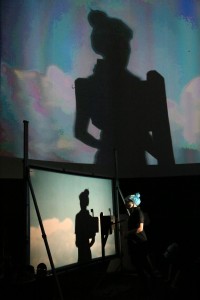 Sarah Fornace plays Lula as a live actor. She wears a wig and a cardboard extension of her profile to make her silhouette mimic the puppet’s. Photo by Eric Krupke/NewsHour

“It’s this combination of ‘Egyptian’ kind of poses,” said Miller, “where you’re trying to keep your silhouette and your profile in two dimensions parallel to the screen.”

Four musicians are seated behind the projectors, cueing sound effects and scoring the otherwise silent film.

“The sound design is done really specifically to make you feel like you’re in the world of the film,” said Kyle Vegter, co-artistic director and composer. “It’s very 3-D. There’s lots of movement in the sound design.”

Before each show, a stack of over 350 puppets sits beside the projector. Some are sheets of acetate, longer than the puppeteer’s arm-span, that slide across the projector bed to pan through a background. Others are smaller, like the two tiny hands mounted on sticks. When the protagonist Lula applauds, Dir holds a miniature hand between each of his index fingers and thumbs, rapidly tapping them together. 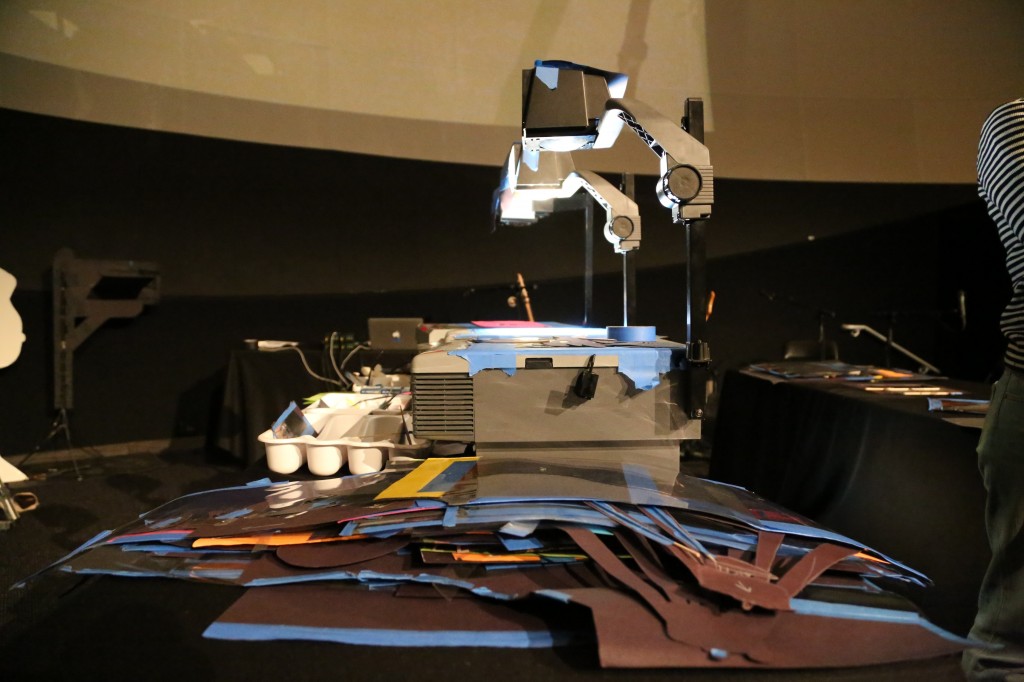 Before each show, the puppeteers stack over 350 paper puppets and sheets of acetate paper chronologically. Photo by Eric Krupke/NewsHour

“I think we were all really interested in nonverbal storytelling because it gives the audience more space to put themselves into the story,” Miller said. “And that’s just something that’s an exciting challenge for us: to try and tell, through silhouette and music, these really detailed stories.

“Lula del Ray” tells the story of Lula, a girl living with her repressive mother in a trailer, surrounded by a forest of satellite dishes. She becomes enraptured with the music of a country duo and leaves home for the city to see them play.

The original iteration of the show, “The Ballad of Lula del Ray,” was Manual Cinema’s first full-length show. In 2010, they created a 20-minute, single projector show for the Puppy Tears Festival of Experimental Puppetry.

“I really wanted to do a female protagonist journey, quest story,” Miller said. “And we were interested in these characters, these mysterious musicians the girl falls in love with.” 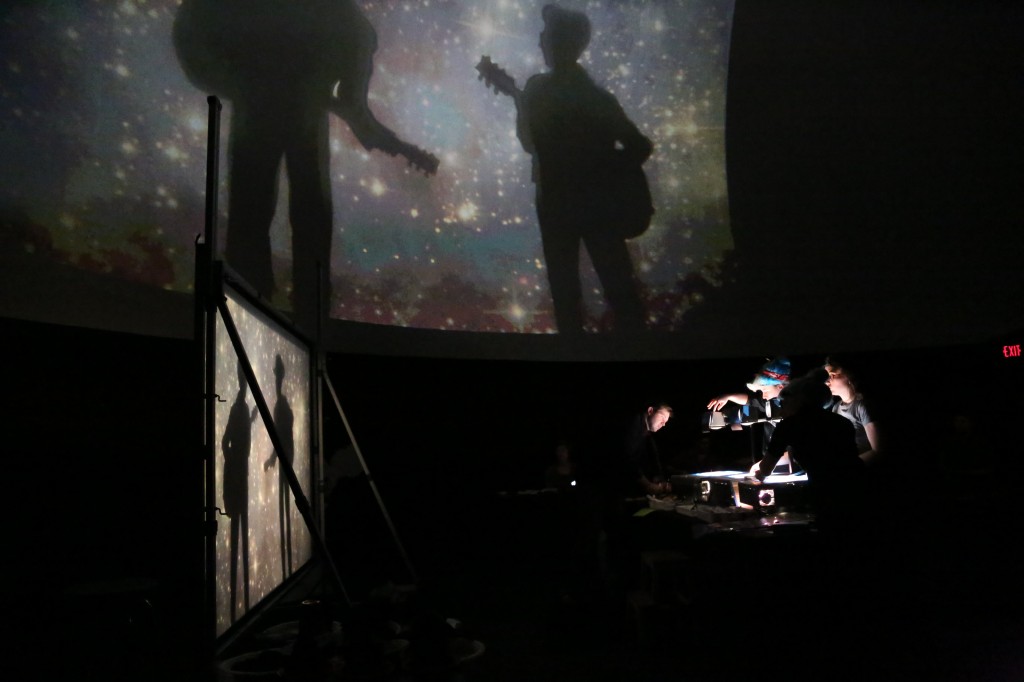 Because “Lula del Ray” has no dialogue, the music sets the emotional tone. “Lord, Blow Out The Moon Please,” the title track by the fictional “Baden Brothers” country music duo, is a recurring motif through the show. Photo by Eric Krupke/NewsHour

Over the years, they added live music and extended the scenes in the city. The character of Lula’s mother developed, and the story became about trying to go home — and home not being the same place you remembered.

Returning to “Lula del Ray” was nostalgic for the Manual Cinema crew. In the past year, they performed other shows, such as “Show and Tell,” a visualization of StoryCorps vignettes.

In September, they traveled to Iran, to perform in the Tehran Mobarak Puppet Festival. An American flag flew in Tehran for the first time since 1979 in honor of their performance and they received a standing ovation for both performances of their show “Ada/Ava.”

They are also working on collaborations with the Metropolitan Museum of Art, a British opera company and the Chicago History Museum to create video performances that will remain on display in more institutional spaces.

“It’s weird to feel all the shows in my body,” Fornace said. “It’s like I’m a library and the different shows live in my body, and even if I don’t remember them super equally, they come back.”