Creator of ‘Clifford the Big Red Dog’ dies at 86 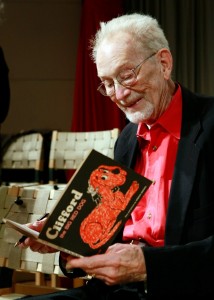 Norman Bridwell reads from a copy of the first Clifford the Big Red Dog book he wrote in 1963.

Norman Bridwell, who brought Clifford the Big Red Dog to life in a series of books and later an animated show on PBS, died in Martha’s Vineyard, Massachusetts on Friday. He was 86 years old.

The first Clifford book was published in 1963 and quickly won legions of fans. All told, there are more than 129 million Clifford books in print in over 13 languages. The series follows the runt of a litter of puppies, Clifford, and his owner Emily who showers him with love which helps him grow to enormous proportions.

Bridwell wrote and illustrated 150 titles, and all were published by Scholastic Books, helping cement their place in the publishing world. Nine other publishers had turned down Bridwell’s Clifford before Scholastic picked them up. The books were later turned into an animated series that aired on PBS Kids from 2000 to 2003.

To see more of Norman Bridwell and Clifford the dog, watch this Scholastic Books video produced for the 50th anniversary of the Clifford the Big Red Dog books in 2013.