Daredevil comic takes on a demon of a different sort: postpartum depression

When comic book writer Mark Waid took over Daredevil’s run for Marvel in 2011, he found a superhero who had battled a long list of adversaries. One in particular — depression — was personal for the writer.

It was an empowering experience, Waid said. “I’ve been pretty upfront about the fact that I’ve personally been dealing with depression issues all my life, successfully, but everyday is a struggle,” he said in a NewsHour interview in September 2014 around the time of the issue’s release. Waid completed his Daredevil run with Marvel in September 2015 and has since moved over to Archie Comics.

Like many comic writers who expand on storylines from their predecessors, Waid’s Daredevil talked about and addressed his depression head on.

Given the nature of mental health issues and the potential hereditary factors involved, Waid took the next obvious step, he said, along with co-writer Javier Rodriguez, and wrote a story (Daredevil #7, 2014) about postpartum depression. The story revealed the long-kept secret of why Daredevil’s mother, Sister Maggie, had left her young son.

In order to be able to accurately depict Sister Maggie’s experience, Waid drew on conversations he had had with his own mother who had experienced postpartum depression as well as other women alongside his own mental health struggles.

“Back then doctors didn’t really understand postpartum depression. They waved it away as the ‘baby blues,’” Sister Maggie explains to Daredevil. “But in a lot of women, it’s very real. It’s not a funk, it’s an illness.”

About one in seven women in the United States will develop some form of maternal depression, or perinatal mood disorder, during pregnancy or after childbirth, including depression, anxiety, obsessive-compulsive behavior and very rarely psychosis, according to a study in the May 2013 Journal of the American Medical Association.

Doctors appear to be talking about it now more than before with their patients, according to a recent study published in the Journal of Developmental and Behavioral Pediatrics. The study showed an increase from 33 percent to 44 percent over the last decade in the number of pediatricians who regularly ask mothers about maternal depression. But while the inquiries and screenings are increasing, further training is needed on the importance of mental health to get the number even higher, the study concluded.

“Maternal depression is often overlooked and untreated because women with mental health issues do not routinely access health care for themselves,” said Dr. Ruth E. K. Stein, co-author and professor of Pediatrics at Albert Einstein College of Medicine.

However, new mothers will make the necessary trips to a pediatrician’s office on behalf of their children, offering important opportunities for the doctor to identify mental health conditions and get mothers the help they need, Stein said in a statement.

The study comes after a federal panel’s recommendation in January that said all health care providers should screen new and expectant mothers for depression. The same panel’s previous set of recommendations in 2009 had left out postpartum women. 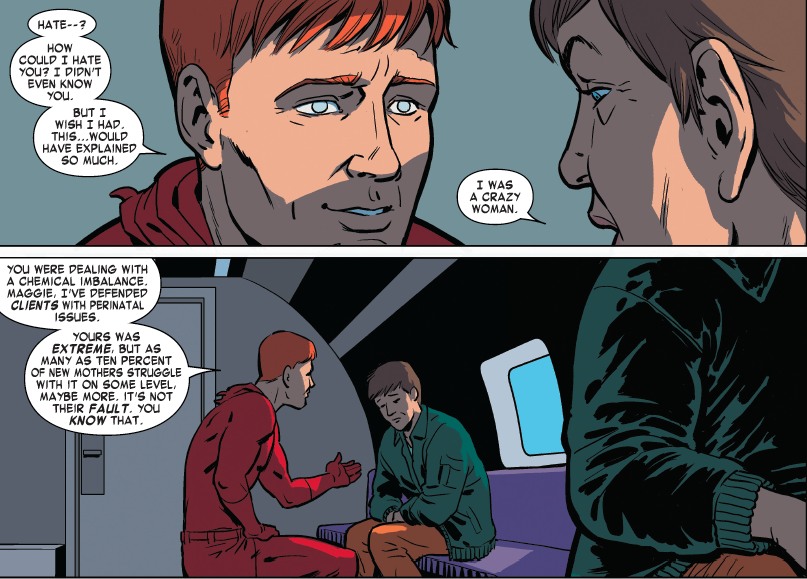 The stigma around maternal depression will shrink as the public increases its understanding, and popular media like comics can help, said Wendy N. Davis, executive director of the non-profit organization Postpartum Support International (PSI) who Marvel editors had reached out to regarding the piece. “Talk about public awareness right to families,” she said.

Jenny Gaskell of Port Washington, Wisconsin, who battled postpartum depression and anxiety during and after her second pregnancy, said the comic book directly affected her family. She said her childbirth classes made references to the “baby blues,” but no one ever talked about maternal mental health issues. “I think a lot of women struggle and suffer in silence until you get to the point when you realize something is really, really wrong.” 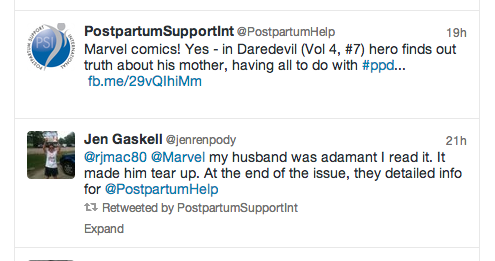 Gaskell recalled how loud noises and family gatherings were overwhelming and how she became irritable and experienced rage, a symptom not often talked about, she said. She learned about maternal depression online through websites likes PSI and PostPartum Progress. She became a blogger in order to get the word out to other mothers and their families.

As Gaskell became more involved with the postpartum community, her husband became more of an advocate, too. He was the one who handed her the Daredevil comic and told her to read it.

Gaskell said she was in awe after she saw how the edition’s letters page, which usually features fan feedback, was devoted entirely to information about perinatal mood disorders. She expressed her appreciation in a tweet.

“It gets the message out to men in a different way,” she said, “They don’t think their wife is just crazy.” 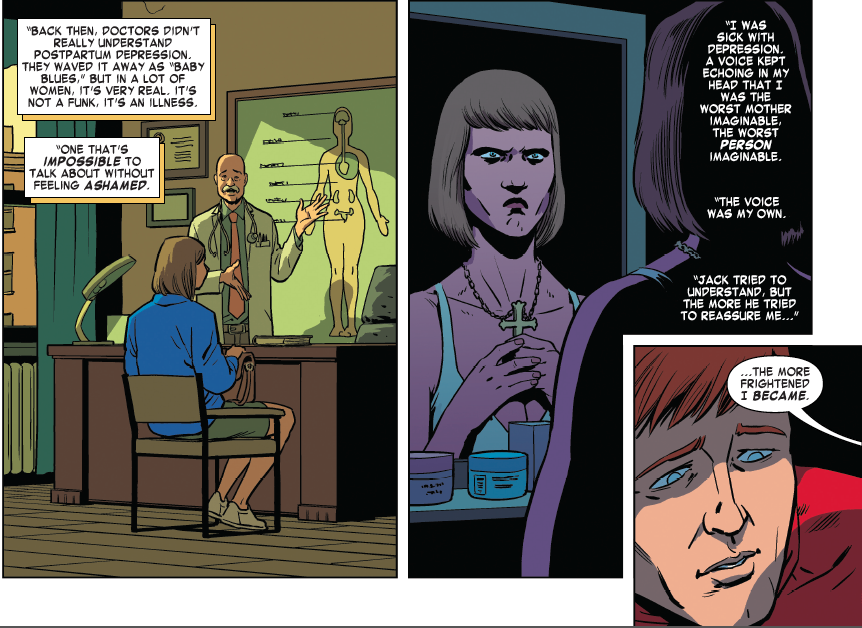 Mothers with maternal depression were often told they had the “baby blues” which left their illness untreated and their symptoms worsening. Photo courtesy of Marvel Comics

“My brain started storming with hideous thoughts,” Sister Maggie tells Daredevil. “That I was letting you down. That I was somehow failing you because a mother is supposed to be happy, and all I could do was cry.” But Maggie persevered. After she left her son, she found a home in the Church and received medical help before becoming a nun and a social justice activist.

Marvel’s team researched and provided detailed explanation of maternal depression. “We wanted to make it abundantly clear that as a consequence of dealing with her postpartum issues and her severe depression as a young mother, it drove her to become a much stronger, more active character in her world,” Waid said. 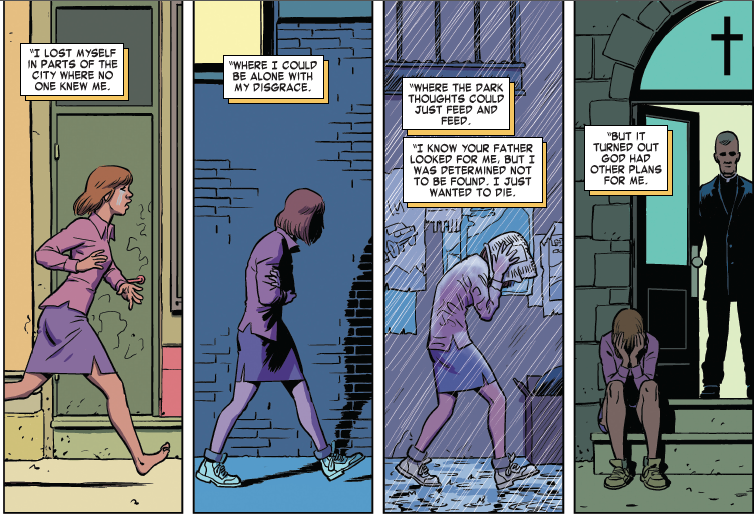 Sister Maggie explains how the severity of her maternal depression caused her to leave her family. Photo courtesy of Marvel Comics

The inclusion of more socially-minded comics gained ground once again in the early 1970s with storylines about alcohol and drug abuse, even if it meant not obtaining the seal of approval from the Comics Code Authority, a self-regulating body created in the 1950s to ensure comics stayed away from controversial issues.

“Most comics are written for adults and older teenagers at this point,” said Annie Bulloch, co-owner of 8th Dimension Comics and Games in Houston and member of the Valkyries, a 500-female strong group of comic book retail workers. “They enjoy the socially conscious approach comics have taken,” Bulloch said.

It’s one of the reasons that drew Christine Hanefalk of Stockhom, Sweden, to start her blog a decade ago. Daredevil’s appeal as a “grown person’s superhero,”someone who has a day job and whose relationships often end badly, a superhero who deals with blindness and long battled mental health issues. Hanefalk said the Sister Maggie story made sense, particularly given the genetic component of depression. 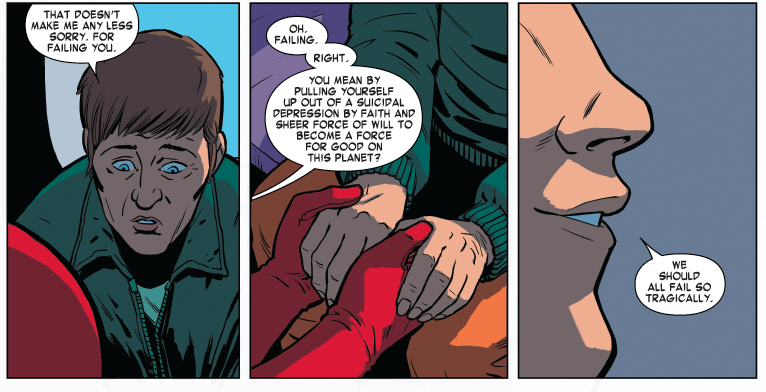 Daredevil, who struggles with his own mental health issues, comforts his mother Sister Maggie who just revealed she suffered from an extreme form of maternal depression. Photo courtesy of Marvel Comics

“It really struck something in me,” said Brett White, an editor at the comic news’ website Comic Book Resources. He wrote a review of Netflix’s Daredevil web series last spring. Season two premieres on Friday.

That’s when viewers might get the chance to meet Sister Maggie. A clue came in the trailer for season two with a closeup of a nun’s habit.

White said he’ll be watching. “Comic books can give you that feeling of I’m just not alone,” he said. 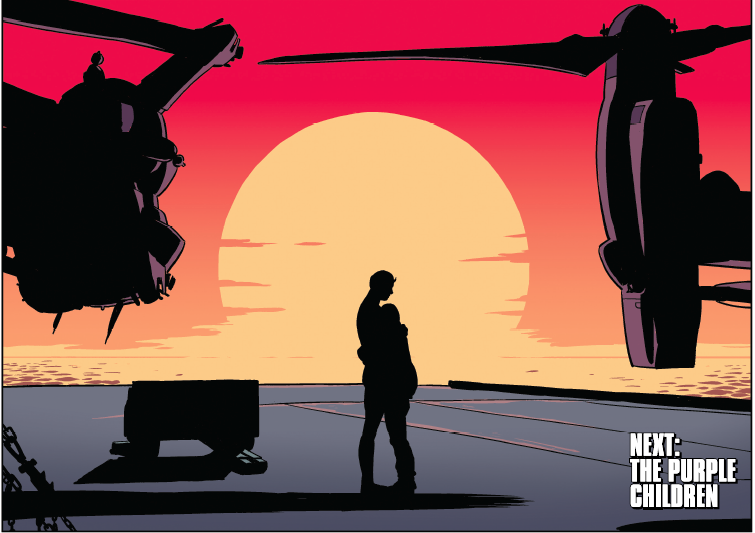 Left: Daredevil discovers the truth about why his mother Sister Maggie, who suffered from severe postpartum depression, left him as a young boy. Photo courtesy of Marvel Comics