Paul Solman answers questions from the NewsHour audience on business and economic news most days on his Making Sen$e page. Here’s Friday’s query:

Question: Given the harm that inflation does to the personal finances of almost every individual in the country, and its tendency to encourage spending and discourage saving, why do so many of our public officials and business leaders favor inflationary policies?

Paul Solman: Because they think its evil twin, deflation, is worse. If an economy isn’t growing, but shrinking, then why invest in the future? Why hire anyone new? The game of capitalism works if there are new prizes to be won. Inflation is the product of exuberance — often irrational. But it gets you up in the morning. Deflation is the product of fear — also often irrational. But it’s more likely to lure you back under the covers.

Consider the remarkable — now turned remarkably tragic — case of Japan. In the late 1980s, it was the unstoppable juggernaut of the global economy. In downtown Tokyo, handkerchief’s worth of real estate went for an inflationary $22,000. (We reprised the relevant excerpt from a 1987 Japan story in 2003 for a piece on a prospective real estate bubble in the U.S.)

Japan, you may remember, ever and ever richer, was on the verge of “No. 1.” Rockefeller Center. Pebble Beach. They were even buying America. On Dec. 29, 1989, its Dow Jones industrial average, the Nikkei 225, soared to within a few points of an inflationary 39,000. 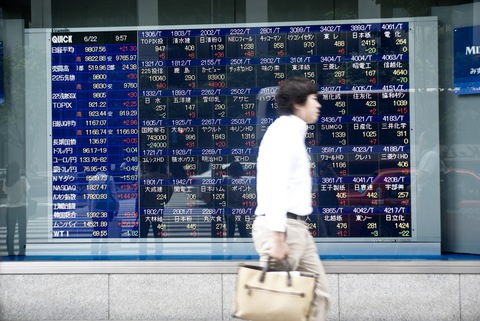 But finally, it turned out, the top had been hit. The stock market and real estate twin bubbles burst. Prices crashed. No one wanted to invest in Japan any more. So the country lowered its interest rates. Still no takers. It built infrastructure projects to nowhere. The economy barely budged. Negative interest rates. Nothing worked. That’s deflation. Today, the Nikkei hovers around 9000. That’s a drop of 77 percent over 21 years. If the U.S. stock market were to drop as much from its peak of 14,000 and change in October 2007, over the same number of years, in 2028 — when I’m in my mid-80s — the Dow would be sitting at around 3400.

The standard story about the evil twins: if your most vivid historical experience is inflation, as with Germany in the 1920s, which allegedly led to Hitler, it is inflation you will fear and guard against. If the vivid experience is deflation, as in our Great Depression, deflation is the bogeyman. I wonder about the accuracy of the standard story. But it makes the point.

As for deflation in the wake of the tsunami, so much Japanese money is now being repatriated to Japan that the country’s currency, the yen, has appreciated even further. (Inflation is a cheapened currency; deflation is the opposite.) This is bad for Japanese exports, which become more expensive with a rising yen. The Western world’s central banks have therefore conspired to lower the value of the yen by intervening in currency markets. Or, as the Wall Street Journal puts it:

The concerted action successfully pushed the Japanese currency lower, though the yen later gained back some ground. A strong yen hurts Japanese exporters, which are a mainstay of Japan’s economy and whose strength will be crucial to the country’s recovery. Yen strength also worsens Japan’s chronic deflation.