Reclaim Detroit is a nonprofit organization that dismantles vacant buildings to re-use their materials. That’s music to the ears of Michigan luthier Gary Zimnicki, who is using reclaimed floorboards and ceilings to craft ukuleles and mandolins. Filmmaker Roy Feldman from WTVS Detroit Public Television takes us inside Zimnicki’s studio.

For more than 30 years, Gary Zimnicki has been making high end guitars, mandolins and ukuleles for musicians all over the world. Becoming a luthier (a maker of stringed musical instruments) wasn’t what Zimnicki initially had in mind when he was a teenager growing up in Dearborn, Michigan. He just wanted to be a rock star. Unfortunately, he couldn’t afford a guitar. A friend lent him a book about the instrument, which had a short section on “how to build your own.” Zimnicki did just that and a career was born. 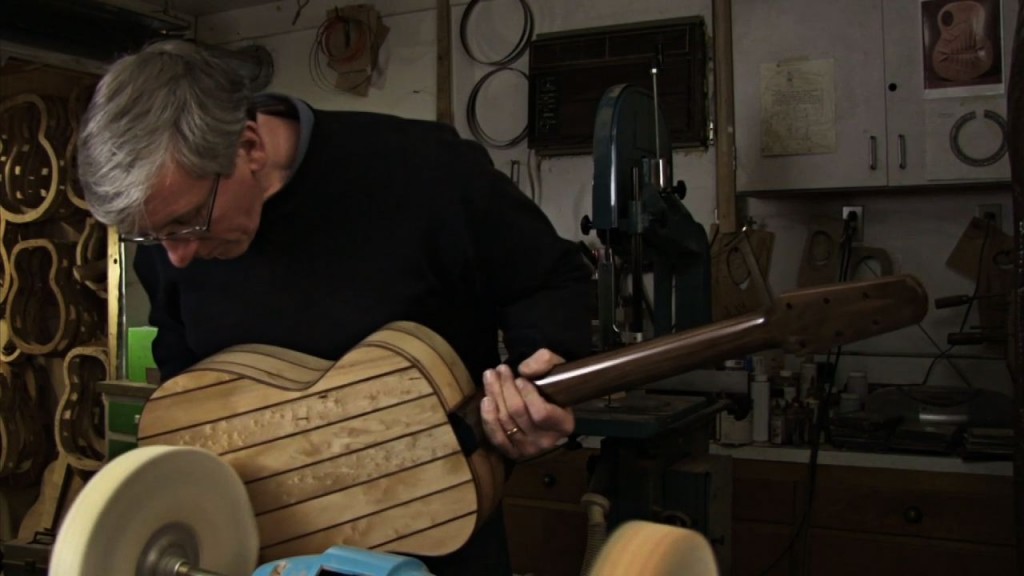 Gary Zimnicki works on a mandolin he made of wood from the floorboards of vacant homes in Detroit. Courtesy DPTV

Recently Zimnicki heard about the work of the nonprofit group Reclaim Detroit. Its mission is to dismantle vacant buildings in the most blighted sections of the city and encourage the re-use of the building materials so they don’t end up in landfills. Inspired by this, Zimnicki began using old floorboards and ceiling joists to craft more than a dozen instruments. He says it’s difficult work, first cleaning off decades of dirt and gunk and then sawing into the very hard wood. But he says the trade-off is that the floor boards, which are 100 years old, produce a deep, rich sound. As a sort of tribute to the origin of the instrument, Zimnicki embeds in each a small mother-of-pearl image of the Detroit house that provided its wood.

“I like to say I’m building instruments not made in Detroit but of Detroit,” says Zimnicki. And he says customers like to buy them because they feel in some small way, they’ve become part of the revitalization of the city.

Local Beat is a new weekly series on Art Beat that features arts and culture stories from PBS member stations around the nation.