Did Shakespeare Have Syphilis?

Writing a book is “a horrible, exhausting struggle, like a long bout of some painful illness,” George Orwell once said. The literary giant behind “1984” and “Animal Farm” was comparing his life’s work to the many illnesses that plagued him from childhood to death. 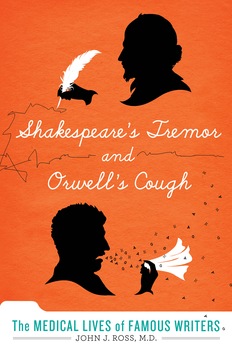 And though William Shakespeare, Herman Melville and Emily Bronte may not have tied their creativity to poor health quite so explicitly, there’s plenty of evidence that disease — everything from tuberculosis to syphilis and mercury poisoning — profoundly impacted works like “Moby Dick,” “Wuthering Heights” and “Hamlet.”

In a new book, “Shakespeare’s Tremor and Orwell’s Cough: The Medical Lives of Famous Writers,” Dr. John J. Ross of Boston’s Brigham and Women’s Hospital looks at how disease and mood disorder may have infected the lives, creativity and words of some of the world’s most beloved authors.

Ross recently sat down with Jeffrey Brown to discuss the book, including what Shakespeare’s handwriting might reveal about syphilis, how the Bronte family’s fatal collision with a Victorian plague made an appearance in “Jane Eyre,” and old medical practices like the use of “mummy,” or ground-up human flesh and bone. They also explore why readers today should even care about these old illnesses — especially when many of them could be treated so much more effectively today. Watch the full interview above.

To get a little more of the book’s flavor, keep reading. Ross summarizes of some of the more intriguing cases below.

Eight Ways Disease May Have Infected Your Favorite Books, According to Dr. John J. Ross

The only medical fact known about Shakespeare with certainty is that his final signatures show a marked tremor. Compared to other Elizabethans, Shakespeare had an unhealthy obsession with syphilis. D. H. Lawrence wrote, “I am convinced that some of Shakespeare’s horror and despair, in his tragedies, arose from the shock of his consciousness of syphilis.”

According to contemporary gossip, Shakespeare was not only notoriously promiscuous, but was also part of a love triangle in which all three parties contracted venereal disease. The standard Elizabethan treatment for syphilis was mercury; as the saying goes, “a night with Venus, a lifetime with Mercury.” Mercury’s more alarming adverse effects include drooling, gum disease, personality changes, and tremor. (In the eighteenth century, mercury was used in the manufacture of felt hats, leading to the expressions “hatter’s shakes” and “mad as a hatter”). Did Shakespeare’s writing career end prematurely due to side effects of mercury treatment?

Milton’s greatest poem, “Paradise Lost,” was written, or rather dictated, after he had become completely blind. His blindness was probably the result of retinal detachment from severe myopia. Milton is known to have “dabbled in physic,” or taken popular medicines of the day in a failed attempt to save his eyesight. These may have included “mummy” (ground-up human bones or flesh), human sweat, cat-ointment, oil of puppies, and sugar of lead, the last of which may have led to Milton’s gout and kidney failure.

Biographers have blamed the deaths of the Bronte sisters on everything from anorexia nervosa to the work of a fiendish serial killer. In reality, all six of the Bronte siblings died of tuberculosis, a Victorian plague that killed off 1 percent of the English population per year. TB entered the Bronte household after the older girls were infected at the Clergy Daughter’s School. This was the place made infamous by Charlotte as the brutal Lowood School in Jane Eyre, where the girls were beaten, starved, and terrorized by tales of hellfire and damnation.

Although the consumptive artist is a tired cliche, there may be some truth in it. The immune system is weakened by emotional turmoil, of which the Brontes had plenty. Charlotte, Emily, and Anne suffered from major depression. Brother Branwell had bipolar disorder and alcoholism. Emily, brainy and strange, probably also had Asperger’s syndrome and social anxiety disorder.

Melville probably suffered from bipolar disorder, an illness that affected many of his works. More youthful works, such as “Moby Dick,” were written in a near-manic state of exhilaration. He became prone to depression and alcoholism as he aged, perhaps explaining some of the gloom of his later works, such as “The Confidence Man.” Melville also had prominent physical symptoms, including disabling attacks of eye pain and low back pain, a rigid spine, and loss of height. Biographers have generally assumed that he suffered from psychosomatic illness, but his symptoms are more consistent with the autoimmune disease ankylosing spondylitis.

Jack London’s manic self-confidence made him the first millionaire author in history, but it also proved to be his undoing. Jack indulged in reckless adventures while in the grip of bipolar disorder, surviving scurvy in the Yukon, alcoholic binges, and a suicide attempt in the waters of San Francisco Bay. When he developed leg ulcers from the tropical disease yaws on a disastrous sailing cruise in the Pacific, he ruined his kidneys by self-medicating with mercury. After returning home, he continued his amateur doctoring, using a silver hypodermic needle to inject himself with opium, heroin, belladonna, and strychnine. He died of a morphine overdose at 40, probably by accident rather than design.

Yeats probably had Asperger’s syndrome. His awkwardness and eccentricity were legendary. He was fascinated with the occult, lost his virginity in middle age, and according to his wife, “had no interest in people as such, only in what they said or did.” Like many persons with Asperger’s, he had prosopagnosia, the inability to recognize faces. He could not identify his own daughter, and once inadvertently lectured T. S. Eliot on the many defects of Eliot’s poetry.

Yeats nearly died of brucellosis in 1929, but recovered thanks to shots of arsenic and horse serum. His brush with mortality inspired a quest to revive his sex drive, leading to a weird “rejuvenation” surgery. Gossips called him the “gland old man” and “a Cadillac engine in a Ford car.”

Joyce described himself to Carl Jung as “A man of small virtue, inclined to extravagance and alcoholism.” In 1904, young Joyce’s fondness for Dublin streetwalkers led to a case of “gleet,” or gonorrhea. His “frenemy,” Dr. Oliver Gogarty, directed him to a local specialist, who would have given Joyce state-of-the-art therapy: penile irrigation with a purple solution of potassium permanganate. Joyce’s gonorrhea was gone, but he soon developed terrible attacks of eye pain and arthritis. This may have been reactive arthritis, an autoimmune illness triggered by genital Chlamydia. Joyce suffered through eleven grueling eye surgeries. Afterwards, leeches were applied to drain the blood and reduce the swelling. Not surprisingly, he developed a terror of surgery.

As described above, Orwell once wrote, “Writing a book is a horrible, exhausting struggle, like a long bout of some painful illness.” This was literally true for Orwell. His health collapsed after writing Homage to Catalonia, and the heroic effort of writing and revising Nineteen Eighty-Four would ultimately kill him. Orwell was a “chesty” child. He had damaged bronchial tubes (bronchiectasis) from a bacterial infection in infancy. As an adult, he survived four episodes of pneumonia and a bullet through the neck, but succumbed to the tuberculosis acquired during his years of tramping, poverty, and vagabondage. Orwell underwent injections of air into his peritoneal cavity in a failed attempt to collapse the tuberculous lung. This ordeal is reflected in the tortures of Winston Smith in 1984.

This entry is cross-posted on the Rundown.