Did you lose Downton Abbey in the British fog? Catch up here before the movie release

NEW YORK (AP) — Does it feel like forever since we lost the style, splendor and scandals of “Downton Abbey?”

Well, dust off your jewels and put up the kettle because the twists and turns at your favorite Yorkshire estate in early 20th-century Britain are back with a feature film, to the delight of fans and “Masterpiece,” among others involved in creating the show.

“When we agreed to co-produce the television series we had no expectation that this was going to become a darling of the American audience,” said Susanne Simpson, deputy executive producer for “Masterpiece.” ”It was really a surprise to all of us.”

So, what to do about all those delicious details that may have faded after the six-season, upstairs-downstairs series ended in 2015 in the United Kingdom and the following year in the United States. We’ve got you covered with this guide to Downton’s past, but first a quick catch up on the cast.

Key aristocrats and their original actors are back, including the Crawleys, of course. Hugh Bonneville is Robert Crawley, the 7th Earl of Grantham, and Elizabeth McGovern is Cora, his countess. They have three daughters, including their eldest, the opinionated Lady Mary, played by Michelle Dockery.

Maggie Smith reprises her role as the wry matriarch Violet Crawley, Dowager Countess of Grantham. So does her frenemy, Isobel Crawley Grey, played by Penelope Wilton.

There are newcomers on the big screen, but we’ll get to that later.

Where we left things

The PBS series concludes on New Year’s Eve, heading into 1926. The rich are selling off their estates in the crash and the middle class is ascending, but there’s even bigger news: Anna procures a shiny silver electric hair dryer at Mary’s request. You know, because progress. And it’s a beaut. Daisy, the assistant cook, can’t resist it, making a mess of her hair.

In other Anna news: She gives birth in Mary’s bedroom, on New Year’s Eve during Edith Crawley’s wedding, no less, as the series winds down.

Sadly, Mr. Carson (the estate’s top dog as butler) has “the palsy,” which did in the careers of his dad and granddad. He agrees to emeritus status, letting the villainous Thomas Barrow take over. 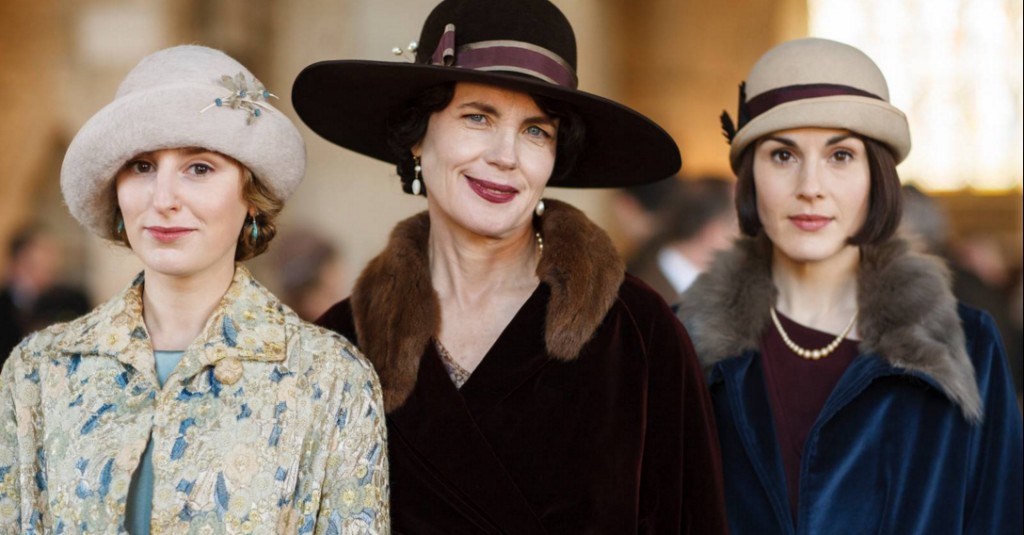 Leading up to her wedding, Lady Edith (the former spinster and one of Mary’s sisters) is surprised at The Ritz by Bertie Pelham, who had previously broken her heart. The arrangements for them to meet were an act of rare kindness on the part of Mary for Edith after years of rocky rivalry between the two.

Pelham begs Edith’s forgiveness before the show concludes with their nuptials. First, Edith comes clean about her daughter, Marigold, who was born out of wedlock, and fends off the initial “damaged goods” qualms of Bertie’s judgy mother.

“Edith is going to be happy. Just think about that,” gushes her American mom, Cora.

‘Lord knows they don’t deserve their luck, those two”

That’s how Robert once summed up the Bateses. Before their happily ever after, with a brand new son, Anna and John had virtually no luck at all.

Anna was sexually abused by her stepfather and fought back with a knife — she only cut him — before arriving at Downton. John is an injured war hero (he uses a cane after taking shrapnel in one leg) who was Robert’s soldier-servant during the second Boer War and saved Robert’s life in an explosion. Robert repays the debt by employing John as his new valet, but John must withstand all manner of resistance from doubters on staff who think his disability makes him unsuitable for the job.

John’s personal life was equally challenging. His horrid first wife, Vera, killed herself with arsenic and set it up to look like he murdered her. John was sent to prison for a long stretch but was later freed. He had already spent time in prison after taking the fall for Vera in a theft of regimental silver.

Anna was attacked and raped by a visiting valet, Alex Green, but she tells only Mrs. Hughes, the housekeeper. Green turns up dead after mysteriously being pushed or falling into traffic at Piccadilly Circus. Anna is charged after a witness reports seeing her near the body on the busy London road. Word also leaks of her earlier knife incident, with prosecutors planning to use that against her as evidence that she’s capable of violence.

John is desperate to see Anna cleared. He falsely confesses to the murder as she awaits trial and then flees to Ireland. The two are eventually let off the hook and reunited.

Gladys Denker. Septimus Spratt. Violet Crawley. Is there anything more fun on “Downton” than these three?

In 1924, Violet hires Denker as her lady’s maid to replace Collins, who was never given a first name, by the way. Denker is an issue for Spratt, her butler, as Collins pretty much deferred to him. The sharp-tongued Denker, who pops up in Season 5, is another matter.

The scheming is divine, especially in the episode in which Denker lies about her ability to make a good chicken broth. She doesn’t, and Spratt sets out to make sure Violet is well aware, including a sink dump of Daisy’s good soup intended to masquerade as one made by Denker.

WATCH: How female characters evolve beyond the corset in ‘The Chaperone’

When Denker is forced to attempt a broth, which is awful — to the delight of Spratt — his scheming backfires. Violet covers for Denker as she samples the foul soup:

“It is, delicious,” Violet manages, spoon in hand. “There’s a point, Spratt, where malice ceases to be amusing.” Denker huffs at Spratt during a Christmas party: “God, you are a dreary little man.”

Dead but not forgotten

The series spans 14 years, starting in 1912, and the dead sort of piled up. Let us honor some of them here.

Robert had no sons so his first cousin, James Crawley, was his presumptive heir. James’ only son was Patrick, who was unofficially intended for Mary, though she had little use for him. James died and Patrick was presumed dead in the sinking of the Titanic at the beginning of the series.

That’s how Matthew Crawley — a distant relative — became Robert’s new heir. Technically speaking, he was a third cousin, once removed. Matthew fell truly, madly, deeply for Mary, but Mary — being Mary — took her time over eight tumultuous years before she finally accepted his second marriage proposal. They married in May 1920. Sadly, Matthew died shortly after their son, George Crawley, was born in September 1921. Matthew was killed in a car accident after visiting his wife and newborn at the hospital.

That made young George the presumptive heir. However, a letter found after Matthew’s death has him leaving his half of the estate to Mary after he and Robert divvied it up. We lost Matthew, but his mother Isobel lived on.

Lady Sybil, the youngest daughter of Robert and Cora, died of complications after childbirth. That’s how the former chauffer, Tom Branson, became a single father to their daughter Sybbie, who was named after her mom. Tom was eventually welcomed into the family after a rough road for the Irish socialist.

There are more, including Robert Crawley’s beloved Isis, one of his golden retrievers. Show creator Julian Fellowes insists the dog’s death was not intended to eliminate her name and its terrorist connotations from the series. He said the prize animal was named after the Egyptian goddess. The Granthams had another dog named Pharaoh.

Theo James had lots to do. He played the drop-dead gorgeous Turkish diplomat Kemal Pamuk, who died while in bed with Mary during Season 1. He’s mentioned on occasion after that.

Iain Glen, who was Jorah Mormont on “Game of Thrones,” played a newspaper mogul, Sir Richard Carlisle. He was a short-lived love interest of Mary.

Richard E. Grant, Tim Pigott-Smith, there were oh so many more guests, but we’d need to write a book. 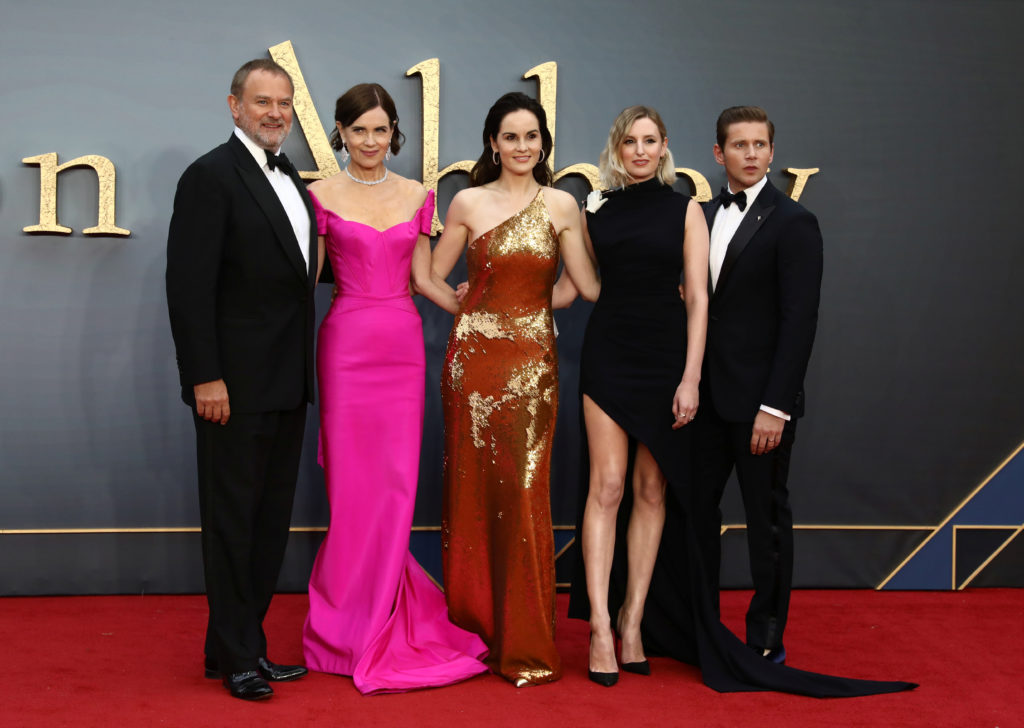 The film is set in 1927, hinged on a visit to Downton by King George V (Simon Jones) and Queen Mary (Geraldine James). It will be released Sept. 13 in the UK and Sept. 20 in the US.

There are some other new faces, including David Haig as the king’s butler and Max Brown in an undisclosed role.