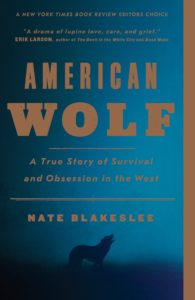 Our October pick for the PBS NewsHour-New York Times book club, “Now Read This,” is Nate Blakeslee’s narrative nonfiction book “American Wolf.” It tells the tale of O-Six, a Yellowstone alpha female who became known as “the world’s most famous wolf,” and the people and politics that surrounded her. Become a member of the book club by joining our Facebook group, or by signing up to our newsletter. Learn more about the book club here.

Below are questions to help guide your discussions as you read the book over the next month. You can also submit your own questions for Nate Blakeslee on our Facebook page, which he will answer on the NewsHour broadcast at the end of the month. (Spoiler alert on questions further down, which mention the book’s end.)

2. Blakeslee tells us that wolves used to be bountiful in North America. Why did they mostly die out?

4. This book tells the tale of a “head wolf” known as O-Six. What qualities make her a good alpha? How does she differ from 21?

5. “American Wolf” begins with a hunter trudging through the snow. Steven Turnbull, as we know him in the book, doesn’t like the wolves. Why do you think Blakeslee began the book here?

6. Why is the wolf reintroduction project so controversial in the Rockies? Where do you fall in the debate?

7. What are you learning about how wolves behave, and how packs work?

8. Have you ever seen a wolf? Or been to Yellowstone? What was the experience like?

9. Do you believe that wolves should able to be legally hunted? Who is affected most by the reintroduction of the wolves?

10. There is some debate over conservationists’ decision to name the wolves, and chronicle their lives on social media. Do you think this is important to do, and if so, why?

11. “American Wolf” also explores some ways of life in the West that are disappearing. What do these look like, and why are they threatened?

12. What do you make of U.S. Sen. John Tester’s last-minute political move, which ultimately allows the hunting of wolves in the state of Montana?

13. How important a role does politics play in the wolf’s survival in America? How does anti-government sentiment play into that?

14. The wolf is a predator mammal, as “The Rampage of the Mollies” chapter makes clear. But Rick, the park ranger, also says that he believes empathy is the most important characteristic for an alpha to have. How does this book complicate how you see wolves?

15. What, ultimately, is the legacy of O-Six? How did her death change the landscape for wolves in America?

Left: Wolves were reintroduced to Yellowstone National Park in 1995 and 1996. Photo by Arthur Middleton/University of Wyoming/Via U.S. Geological Survey