Tara Westover’s memoir “Educated,” which describes growing up in a survivalist family in rural Idaho and then going on to Harvard and Cambridge, is our May pick for the new PBS NewsHour-New York Times book club, “Now Read This.” Become a member of the book club by joining our Facebook group, or by signing up to our newsletter. Learn more about the book club here. 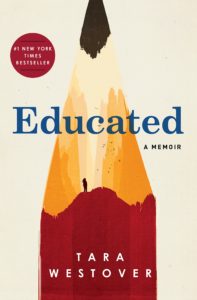 Below are questions to help guide your discussions as you read the book over the next month. The questions are broken into three parts, to match the three parts of the book. (Spoiler alert on questions further down, which mention specific scenes in the book.)

1. “Educated” starts with an epigraph from Virginia Woolf: “The past is beautiful because one never realizes an emotion at the time. It expands later, and thus we don’t have complete emotions about the present, only the past.” What do you think Woolf meant by this? Why do you think Tara Westover chose to begin her memoir this way?

2. In the first pages of “Educated,” we are introduced to the mountain in rural Idaho where the Westover family lives, described as a dark, beautiful and commanding form in a “jagged little patch of Idaho.” How does this setting inform their experience?

3. We are also introduced early in the book to the standoff at Ruby Ridge, a 1992 gunfight between FBI agents and U.S. marshals and a heavily armed family on an isolated homestead. How does this incident cast a shadow over the Westover parents and children, and the survivalism that characterizes their upbringing?

4. In Chapter 5, Westover’s brother Tyler announces that he’s going to college, something none of her other siblings have done. (The two brothers who have left the mountain drive semis and weld scrap.) Why does Westover’s father Gene object to formalized education? How does Tyler’s leaving impact Westover?

5. In the Author’s Note, Westover cautions that this memoir is not about Mormonism or “any form of religious belief,” and that she rejects a negative or positive correlation between believing or not believing and being kind or not being kind. But her father Gene’s faith is a sort of character in this book, informing how he sees the world. What did you make of Chapter 8, “Tiny Harlots,” which moves from Gene’s distrust of Westover’s dance recital uniform to his pride over her singing in church?

6. By Chapter 12, “Fish Eyes,” we are introduced to Shawn’s abuse of Westover and the other women in his life, which recurs throughout the book. When Westover starts crying over one of these early incidents, she writes that she is crying from the pain, not from Shawn hurting her, and that she sees herself as “unbreakable.” She also writes that his abuse not affecting her “was its effect.” Why is this insight important?

7. By part two of “Educated,” Westover has decided she wants to get an education, has found a way to take the ACT, and has left the mountain to go to college at BYU, despite her father’s objections. In her first class at college, Westover recounts not knowing what the word “holocaust” means. Why is this moment significant?

8. Over the course of this book, the Westover family deals with a number of accidents: Westover’s brother Tyler falling asleep and driving off the road, Westover’s brother Luke catching on fire, and later, a very serious accident for their father. Early on, Westover writes that she thinks “all the decisions that go into making a life — the choices people make, together and on their own, that combine to produce any single event.” What do you think she meant by this? How does this insight apply to your own life?

9. Throughout the book, Westover refers back to journals she kept growing up. Sometimes, she recorded events as they really felt, but many times, she says she presented events as less traumatic than they really were, or used “vague, shadowy language” to obscure how she’d been hurt. How do these journals inform the book?

10. By Chapter 22, Westover writes that her life was often “narrated for me by others. Their voices were forceful, emphatic, absolute. It had never occurred to me that my voice might be as strong as theirs.” What is the significance of this realization? Do you identify at all with this?

11. At BYU, Tara recounts going to a professor for moral advice, and instead getting advice that she should apply for a very competitive study abroad at Cambridge University, which she’d never imagined she could qualify to do. “He’d seemed to say, ‘First find out what you are capable of, then decide who you are,’” she writes. Has anyone ever given you advice to do something beyond what you thought you were capable? Did you follow it?

12. Westover’s mother is a midwife and herbalist. How does her perception of these kinds of healing change over the course of her life? How does working change her?

13. Westover writes that her father looked slumped when she left for Cambridge, an expression of “love and fear and loss” because when she’s across the ocean he can’t keep her safe. How did you view her relationship with her father, and did your perception of that relationship change throughout the book?

14. After Westover decides to continue her education, she finds it increasingly difficult to reconcile her life on the mountain with her new life as a student of history. She writes that she had a “fractured mind.” Does it seem to you that she must lose one life to gain another?

15. One of the most difficult scenes in the book comes near the end, when Westover realizes that Shawn has killed his dog Diego after coming to her parents’ house with a knife in hand. How does this moment change things for Westover?

16. One professor describes Westover as “Pygmalion,” while Westover herself at one point says she believed she could “be remade, my mind recast” at her university. And in the end, she writes that she is a “changed person” from the person she was as her father’s daughter, and from her 16-year-old self. “You could call this selfhood many things,” she writes. “Transformation. Metaphorosis. Falsity. Betrayal. I call it an education.” What do you make of these final lines?