Mohsin Hamid’s novel “Exit West,” which follows two lovers on the move from a country on the brink of civil war, is our March pick for the new PBS NewsHour-New York Times book club, “Now Read This.” Become a member of the book club by joining our Facebook group, or by signing up to our newsletter. Learn more about the book club here. 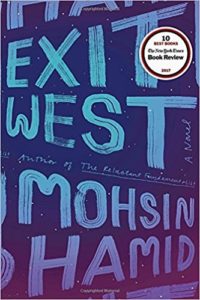 Below are questions to help guide your discussions as you read the book over the next month. The questions are broken down by week, or divided into four parts to match your reading speed. (Spoiler alert on the questions that are further down if you read ahead!)

1. “Exit West” begins with two people meeting in a city “swollen by refugees but still mostly at peace, or at least not yet openly at war” — setting the scene for what’s to come. Throughout the book, as the city descends into war, Hamid never mentions the place’s name. Why?

2. As the book follows its two main characters, Nadia and Saeed, readers also meet a thief in Australia, a suited-man targeting women in Tokyo, and an old man whose house is being surrounded by military men in San Diego, among others. We never meet these characters again. What do you think is the purpose of these interludes?

3. We learn early on that Nadia wears flowing black robes but is not religious. She says she does it so that men won’t disturb her. When she goes to withdraw money from a bank, she is groped in a crowd with “incredible force.” What are we supposed to take away from the scenes about the ways women have to survive in a period of instability?

4. Even as the city descends into war, and events become increasingly scary, Hamid rarely tells us that the characters feel fear. Instead, the reader is left to decipher how the people in the book must be feeling. Why do you think that is?

5. Hamid describes windows in people’s houses as a “border through which death was possibly most likely to come,” and the many ways a house has to be rearranged during war to ensure it’s safe. How is the feeling of home as a secure place challenged in this book?

6. After discussing the windows, Hamid introduces the rumors about doors “that could take you elsewhere…” What do we learn about the dangers and promise of these passageways?

7. The militants who take over the city do not allow music, do no not approve of unmarried lovers like Nadia and Saeed, and come looking to kill people of a particular sect. Does this book feel representative of the unrest of our present time, of our past, or both?

8. When Nadia and Saeed learn that the magical doors do exist, and can in fact take them away from the violence of their city, they are excited and immediately pursue an agent to help them leave. Saeed’s father, on the other hand, only says of the doors: “Let us see.’ Does this feel resonant to you of the experience of different generations of migrants?

10. As migrants move through the magical doors to other places, trying to escape war and chaos, the passage they take is described as: “both like dying and like being born.” Does this description feel representative of the experience of people who migrate today?

11. We never hear, though, about what actually happens as people migrate through these doors. Why do you think the migration itself is absent from the narrative?

12. As Nadia and Saeed escape through the doors, we learn that not just their city, but much of the wider world, is in turmoil. Refugees are on the move to Mykonos in Greece and Marin County, near San Francisco. Riots are starting over migrants in Vienna and in London. What do you think Hamid wants us to understand about this global instability?

13. As these cities become more unstable, they also come under greater surveillance, at the hands of unseen authorities. These authorities also control the electricity network and internet connectivity. How do these changes impact the people in the book? How does it feel relevant to today’s world?

14. In the cities to which migrants flee, Hamid writes that people began to reassemble with others of their own kind, “like superficially with like.” At one point, even Saeed wants him and Nadia to relocate to live with others like them, though Nadia resists. What do you think is behind this human impulse?

15. As Nadia and Saeed continue to move locations, their relationship becomes increasingly unstable, and the way they speak to each other not as kind. By the end of the book, Hamid writes that they begin “slipping away” from each other, as people all over the world are “slipping away from where they had been.” What does Hamid want us to learn here?

16. And yet at the same time in Amsterdam, two elderly men fall in love. What do you take away from his interlude?

17. The book ends in the city of Nadia and Saaed’s birth, which Hamid writes seems to them both familiar and unfamiliar. How did you feel about this book’s ending?